I wander around Sydney inventing in my mind new niches for that branch of arts reporting that's like city desk reporting, a granular description of what's happening on local stages and in galleries and bars and life itself. I rented the first three episodes of Season 5 of The Wire from Video Ezy in Potts Point yesterday, it shows city desk reporting in peril in a traditional newspaper.

I don't have the patience to watch a series unfold, episodically on broadcast television. I want to watch a whole series at once, in the way that I'd read a book. And I want some kind of New York Review of Books of television reviewing on DVD. In Steven Johnson's book, Everything Bad is Good for You, he talked about the growing complexity of television shows, they they had something in common with computer games in that they were worlds to explore, and become immersed in. They were made to be viewed more than once. The Wikipedia entry for the New York Review of Books says that its premise is that "the discussion of important books is itself an indispensable literary activity." The Sydney Review of Television on DVD would be modest and simple, like the format of the New York Review of Books, and be sold for a few bucks in video stores and bookstores, and supplement its revenue with vouchers that could be clipped that offered deals on rental and purchase of DVD's.

I look at the free postcards and pocket size saddle stitched booklets for theatre companies and galleries and musicians that are distributed to cafes and galleries and museums and bookstores, by Avant Card, and wish there were a version of them for the "gift book" market -- those pocket size novelties that sit near the cash registers in bookstores. Why buy greeting cards that advertise 19th century French plays? Why not buy a set of cards advertising Bell Shakespeare productions? Why buy a booklet of hints for being a greener consumer, when you could buy a booklet sized set of transcripts from the Sydney Theatre Company's lectures on climate change. I've invented a fast, inexpensive binding method for turning these saddle stitched booklets into handsome hardcover books.

Bell Shakespeare. Poster for the current production of Twelfth Night

Season 5 of The Wire shows what we lose when fine city desk reporting is devalued. There's so much focus on preserving the business structure that's supported newspapers that we've lost focus on reporting. There are other funding possibilities, the Spot.Us crowdfunding project is one. It's the patient attention to detail of reporters we should be rewarding. In his commentary over the pilot episode of The Wire, David Simon said the series is paced like a great novel, "you don't meet the whale in the first chapter of Moby Dick." In the introduction to Homicide, the book of David Simon's city desk reporting in Baltimore that was the foundation of the series, Richard Price writes:

"But even with the creative freedom of fiction, his work remains an exaltation of nuance, a continuing exploration of how the smallest external act can create the greatest internal revolution - in the life of a single marginalized person or in the spiritual and political biorhythm of a major American city. All of which is to say that if Edith Wharton came back from the dead, developed a bent for municipal power brokers, cops, crackheads and reportage, and didn't really care what she wore to the office, she'd probably look a little something like David Simon."

Reading Homicide with the wide view David Simon encouraged on The Wire, where you keep the whole city in mind while you're concentrating on the details, made me remember that Charles Dickens had been a great city desk reporter too.

There's going to be an Enhanced Edition of Homicide, where the eBook is supplemented with a video interview with David Simon and material (unspecified at this stage) that relates to Season 5 of The Wire. But the feature that I find most useful in the Enhanced Edition I own of Nick Cave's novel, The Death of Bunny Munro, is the way the app keeps pulling in reviews, interviews with Nick, and source materials. The world of the novel is being constantly articulated. The book itself can be read, as a book, but the ability to be able to move seamlessly between reading silently and reading along while Nick narrates the book, while fragments of music composed for the book can be heard, and sound effects are used as metaphors or for emphasis, in the same way as they are in his music, is almost the invention of a new artform. All of Nick's endeavors, music, soundtracks, movies, writing, even the collaborations with artists for covers of Bad Seeds albums, are part of one voice. The subtlety and fine beauty of the story emerges from these elements on a re-reading. 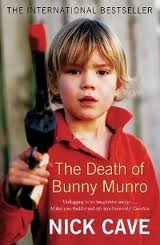 I think it's meant to be regarded as a myth: the title tells the story. Bunny Munro dies. The hero of the story is Bunny Jr, a sweet child who shows his parents unconditional love though he's aware of their faults and he doesn't judge them for abandoning him. He's curious. His prize possession is an encyclopaedia. The point of mythology isn't to understand the meaning of life, but to draw insights and wisdom from the stories, to enrich our own life experience. Bunny Jr's encyclopaedia is destroyed but he's absorbed the wisdom and at the end of the book finds the strength within himself to move forward into life alone. Nick's first novel, And The Ass Saw The Angel, was written not long after he'd lost his own father. It was a son's book for his father. This novel is a father's book for his own sons.

At this point the debates about eBooks, about who gets to be publishers, who determines prices, and what devices they're made available for, all seem to be focused on the idea of the book as something separate. What Enhanced Editions are doing is preserving the nature of a book -- still words and images -- and placing them in the worlds that they're drawn from and inhabit. And with books reflecting worlds critics may now be judged by patient and skilled reporting and how sharply they're able to build upon connections between works and the worlds they're drawn from.

"As media becomes more niche, the role of the popular critic may change with it," Marcus Westbury wrote on his website a couple of days ago. "It's becoming less about being an expert to a mass audience and more about becoming the reconnaissance party for a niche one. Perhaps the next generation of critics will know more about the communities of interest they represent than the art forms they're reviewing. In a world of fragmented audiences, knowing what will interest someone -- whether it's a warehouse gig, a gallery show, a pub performance, an online video or a major institution -- may be more important than being the expert in theatre, visual arts or dance."