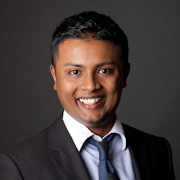 When I first met George Mathew, some three years ago, in a business gathering, I remember an acquaintance introducing him as 'a young man with immense capital' to invest in Singapore's fast-paced economy. I looked at him curiously, from top to bottom.

In front of me was a suave youngster in his early twenties, who had a Jim Morrison T-shirt on. One that even I had in college, and that read as "There are things known and things unknown, and in between are the doors."

So what's your favourite Morrison song? I asked to begin a conversation.

"Break on through to the other side," said Mathew, without wasting a moment.

Of course, of course, I said. The gate is straight, deep and wide. Break on through to the other side. I know that one.

"True, however, the gate is open only for those who rush towards it," remarked Mathew. And even before I realized, he disappeared in the madding crowd.

Oh well, that was fast. I hadn't even asked him about the 'big capital' he was sitting on and what on earth would a youngster like him do with it? I was also curious to know how he made it in the first place. You know, with all these new-age kids making ridiculous amounts of money by uploading home-made videos on YouTube and getting discovered by recording labels. But I couldn't get the chance to quiz Mathew.

Some time back, I bumped into the face that had got lost in the crowd. Mathew was addressing a group of young Singaporean CEOs of start-ups at a business event. I had forgotten his name but remembered his wit, all along.

Hey, Morrison, are you still breaking on through to the other side? I asked.

"Absolutely, I am 'chasing my pleasures and digging my treasures' right here in Singapore," exclaimed Mathew, quoting lines from the same song.

So what exactly do you do and what is your business model? I asked bluntly this time.

"I am a start-up specialist and run Servolve, a company that brings both conventional and disruptive ideas to life and opens doors for anyone aspiring to get started in Singapore. So if you have a smart-phone app that tells you how sexy you look today or want to design a nanotechnology aided solar panel, I'll lead you all along," said Mathew.

I had heard that spiel before and wasn't too sure about it.

"But do you actually make money doing that in a competitive, capitalistic market like Singapore? I mean, isn't Singapore the financial and knowledge hub of Southeast Asia?" I asked.

Why would one want to start up unconventional business models here when running conventional businesses itself is a challenging task? I guess I wasn't prepared for what was about to follow. Mathew churned out an extraordinary tale of success and inspiration.

Turns out, when I met Mathew a couple of years ago, he was a regular employee in a Singaporean consulting firm. But over a period of time, the entrepreneur in him refused to be another brick in the wall.

With only USD360 in his pocket then, he went with his girlfriend to a Certified Public Accountant's (CPA) office. The CPA promised Mathew that his company, like any other start-up in Singapore, would be up in less than a day.

"I had little hopes and could not imagine USD360 would be enough to open up my own corporate services company. On a comparative scale, with the same quantum of money, the best possible option that one could exercise in two of the fastest growing economies from Asia, India and China, would have been to either open up a small, neighbourhood mom-and-pop shop or a public telephone booth. Nothing more than that," says Mathew.

"On top it, I wasn't even a local and was apprehensive why the state would allow a foreigner to open up a private limited firm with practically no capital, no bank collateral, no manpower and no business assurances from the market," adds Mathew.

However, that midnight, Mathew's CPA sent an email which read -- Servolve is born.

No hindrances, no red flags, no bureaucratic hang-ups, arduous documentations, or delays, whatsoever. Mathew opines that the Singaporean government primarily took into cognizance two key factors while granting him a licence to play in the island: meritocracy and the ability to boost entrepreneurship in Singapore.

"I realized that very instant that the aura and energy of Singapore, besides its efficient public policies, supported the genesis and growth of dynamic business enterprises in the most accommodating manner. Here was a place that was offering young entrepreneurs to step on the gas and start pushing the frontiers of the productivity cycle," remarked Mathew.

And it was this very support system, of being able to create opportunities and platforms to innovate, that Mathew in turn decided to extend to other entrepreneurs and start-ups. He was now acting as the key intermediary between Singapore's open market and global entrepreneurs. His intent and vision had been enhanced manifold by Singapore's business-friendly public and corporate policies, taxation system and easy accessibility to ASEAN and other Asian markets.

In less than two years, Mathew had helped over 100 entrepreneurs and companies from around the world set up their businesses in Singapore, by providing them advice on registering a company in Singapore, understanding its business culture, grasping its taxation policies, immigration support and sourcing angel investment.

Today, Mathew's team includes professionals from every continent on earth, between whom 20 different languages are spoken, and form a business network that runs in every time zone of the world. The entrepreneurs supported by Mathew and Servolve range from a modest swimming coach from Britain to the CEO of a billion-dollar listed firm in India.

"Would I have been able to achieve this in any of the so-called rising Asian superpowers? Not at all, the corruption in India scares me and the cultural challenges in China makes business mobility an uphill task," proclaims Mathew.

"In China if you try starting an SME, there's a good chance you might get ripped off. In India, you might not even get to start. However, in Singapore, public machineries perform without fail and the government as well as the general populace is able to match up with the pace of modern technological advancements."

Mathew's thoughts have probably been expressed previsously numerous times by policy analysts, academics and industry practitioners, yet they remain the closest reflection of business sentiments at the grassroots level.

"Servolve is not just my story. It is the story of every entrepreneur who dreamed of doing the unconvential, and found a convergence between his risk-taking ability and a secure playing field in a stable economy like Singapore," says Mathew.

As far as I am concerned, I now know what that capital was which George Mathew had in plenty even before he charted his story. It wasn't an enviable stash of money as I had imagned. Instead, it was his faith in a meritocratic and egalitarian system that gave him a legitimate chance to script his entrepreneurial destiny.

Did he break on through to the other side? Of course, he did. You can bet on that.