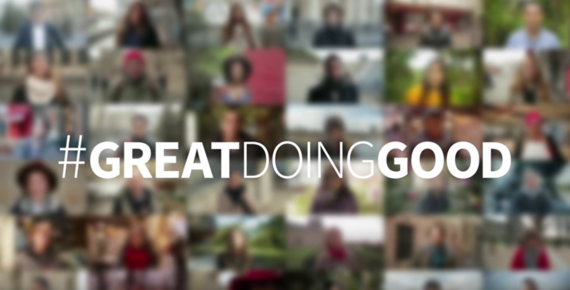 Last fall, social innovation went to Geneva to attend the global prom. That's how I looked at The Social Innovation and Global Ethics Forum (SIGEF), an international event organized by Horyou that brought together nonprofits, renowned speakers, social entrepreneurs and the general public for three days of dialogue around pressing issues, such as social empowerment and equal access to water.

To build on the momentum of the SIGEF Event, Horyou.com -- the social network for social good -- has launched #GreatDoingGood, a website and campaign to support the social good promoted by the Horyou platform. The campaign has gathered dozens of testimonials from people across the world about why it's great to do good, in an effort to inspire people across the world to engage in positive actions.

#GreatDoingGood ups the ante by making a game around the various videos and offering the winner a $1500 prize, with an additional $1,500 going to the NGO of the winner's choice. Horyou is also organizing a social media challenge in support of the #GreatDoingGood campaign by inviting people to share a good action on social media and challenge their friends to do the same, creating a virtuous cycle of positive actions.

How do social media opportunities like #GreatDoingGood foster concrete action with philanthropy? I think these opportunities create an ideal onramp for people to be more engaged with social issues and solutions, and empowered to make a difference. Campaigns that involve ordinary people inspiring others through word of mouth have the potential to make philanthropy more relatable and accessible, demonstrating that small actions can generate big, positive results.

Other highlights of the report reveal:

Social media undoubtedly plays an important part in involving individuals and employees in social engagement. #GreatDoingGood by Horyou.com is a gift that invites people and companies to start a conversation and then translate it into action.