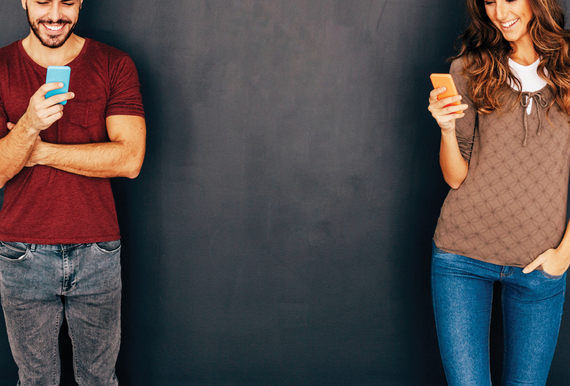 Social media is one of the fastest-growing industries in today's interconnected world, attracting more users every day. At the forefront of this movement are teens--a Pew Research Center study stated 92 percent of teens report going online daily, making them the most active social media participants of any demographic.

"For people entering college next year, social media will be ubiquitous--next year's freshman class will have largely been born in 1998," said Paul Booth, associate professor of media and cinema studies at DePaul University. "They will not remember a world without YouTube, Facebook or Twitter ... They're certainly more 'plugged in' than earlier generations because that's the world they grew up in."

As a result of this ubiquity, teens have seen a monumental shift in nearly all facets of adolescent life.

"I think it definitely makes in-person relationships harder because of people's attention given to their phones or devices instead of their boyfriend or girlfriend," Cooper said.

Beyond diminishing a couple's time spent together, some think there's a greater possibility for things to get lost in translation over social media.

"You also lose a more personable experience because if half of your relationship is over social media, you don't really know how the other person is reacting, and it may not feel as intimate as other relationships," St. Charles East junior Sienna Schulte said.

Though there may be a greater risk for disconnect in teen relationships over social media, some argue that bonds are more easily initiated and accessible through the online platforms.

With this accessibility, teens are able to generate relationships with anyone, regardless of location. St. Charles East senior Beth Kaplan met her long-distance boyfriend of a year through social media. He currently lives in Scotland, but with the help of social media, they're still able to frequently communicate with one another.

"I can feel close to someone that I'm talking to via FaceTime," Kaplan said. "I can be miles away from someone and feel like they're in the room. Social media has made this virtual intimacy a reality."

While social media has made it possible for some teens to grow closer together, it can also cause problems in the event of a breakup. St. Charles East senior Jake Battista said his ex had an anonymous Twitter account that she used to share the details of their breakup with her followers. Battista said he didn't know about the account until a friend showed him.

"Relationships are personal and the problems that occur in the relationships don't need to be broadcasted to everyone. You know?" he said. "It ain't cool. And it definitely makes you lose trust in people."

In light of this dilemma, Facebook recently introduced a tool to help make it easier to separate from an ex. When a user changes their relationship status to single, he or she is now given the option to see less of that person in their feed and keep Facebook from automatically suggesting their name in tagging.

M.J. Wallace is the mother of two teens, one of whom is a Cary-Grove junior. She said she thinks social media is beneficial in the way it keeps people connected.

On the other hand, Wallace said she recognizes the danger in how much teens post on social media. Future employers or college admissions officers can search and find whatever kids put online. Despite this reality, she said she doesn't actively supervise her kids' social media accounts but she does try to be aware of what's going on.

"I don't have time to monitor their social media things, but I am on Facebook so if I do see something that's a little inappropriate, I will give them a call to take it down," she said.

Wanting to be 'liked'

The rise of social media has granted more opportunities to meet new people and begin relationships, but it also has changed the way teens view themselves and compare each other.

This trend made news recently when 19-year-old Instagram star Essena O'Neill announced that she was quitting social media because it made her miserable and obsessed with appearing perfect online.

Negative posts or comments also can do great damage to a teen's self-esteem. According to a Livescience Health study, about 23 percent of teens report being targeted in some means over social media.

"I've seen social media lowering a teenager's self-esteem," adolescent therapist Kathy Catenacci said. "They can't escape the constant barrage of negative posts, how they should look, dress and act without being able to escape it for very long."

In particular, anonymous apps such as Yik Yak function as incredibly large and easy outlets for cyberbullying and targeting. The app allows users within a five-mile radius to create and add to discussion threads about anything and everything. Cooper said that teens targeted anonymously on these sites can't help but feel embarrassed and hurt.

On the other hand, Lyons Township junior Armin Korsos takes advantage of the feedback he receives over social media. Korsos runs his own YouTube channel and uses the reactions and comments to his video--positive or negative--to help him improve his channel for the future. Through social media, his videos reach people across the world.

"Social media can help people show themselves and their talents to the world in a way that has never been possible before," Korsos said.

Nonetheless, Korsos recognizes the distraction that social media has become.

"People begin to forget that social media isn't a necessity to live," he said. "Yes, it helps people connect with their friends and stay updated on what's going on, but it's not all necessary."

Social media has forever changed teens' lives, making them more connected--and disconnected--than ever before. But for everyone labeling social networks a social disaster, Booth said it's just the latest change in technology.

"And in 60 years, when a new form of communication technology comes out, people who are teens today may look at each other and think about how much better it was when people were texting and sending emojis back in 2016," Booth said.