Some people can take the heat, and some just can't. The heat we're referring to is the spicy, mouth-burning, sweat-inducing effect of a chile pepper. And if you're one of those who can't take it, you'd better be sure you don't find yourself face to plate with a rocoto pepper, or worse, a ghost pepper. These chile peppers are ranked high -- meaning they have a lot of heat units -- on the Scoville scale, a ranking system that gauges how much capsaicin is present in each chile (capsaicin is what we taste as spicy).

One problem with chile peppers is that often times it's hard to know which is which -- a lot of them look remarkably similar. And they're not always well labeled at the grocery store. (How many other people have that problem?) So to make sure you don't add a whopping tablespoon of habanero when you think you're working with pepperoncini, take a look at the infographic below. Actually, we recommend you print it out and tape it to your fridge. You'll never have to worry about setting your mouth on fire again.

How much heat can you handle in your food? Leave a comment. 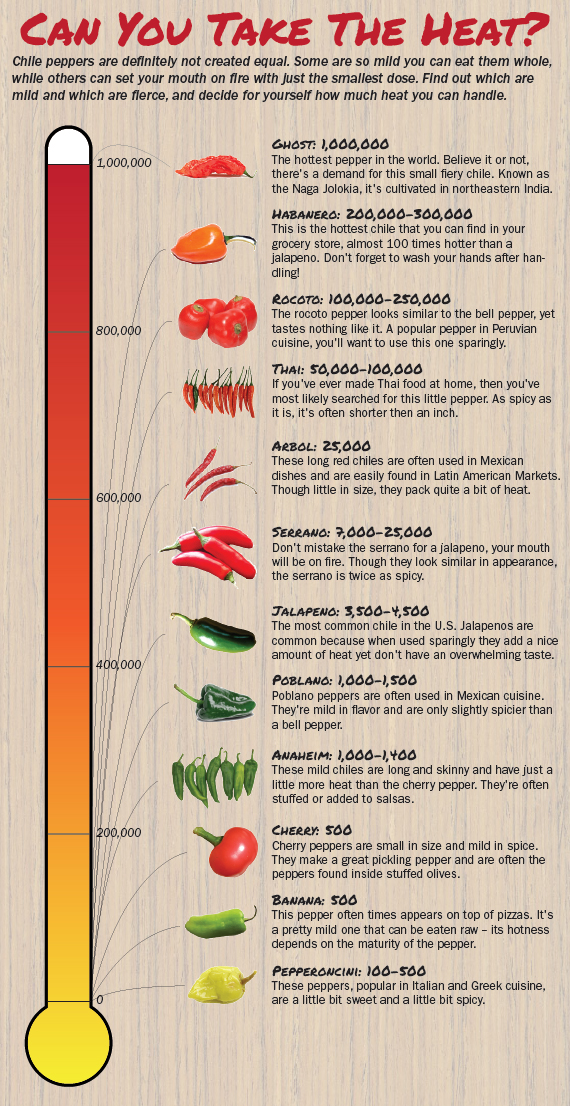 The spelling of the word "chili" in the phrase "chili pepper" is contentious. "Chili" is the most common spelling in most parts of America, though some discourage its use because of possible confusion with the ragu-like Tex-Mex dish "chili." Associated Press style opts for "chile," the preferred orthography in Spanish, which is consistent with the name of the scientific institute devoted to chiles and which ranks the the hottest peppers in the world.