Most state governors want to bring more businesses and employment to their states and maintain sustainable budgets. An important new paper from two of our colleagues, Michael Mazerov and Mike Leachman (M&L), provides a new and important insight in this regard: incentives in the form of tax breaks and other goodies are a bad way to get more jobs and a good way to waste taxpayer money. These ideas fail not just because they are poorly targeted, but also because their cost diverts state resources away from important investments that do boost employment prospects in the long run.

First, as M&L explain, state lawmakers seem to believe that large income tax cuts and/or exempting small business profits from taxation will encourage small business formation, thus driving job creation and economic growth. But few taxpayers own small businesses to begin with and about 80 percent of "small businesses" are just owner-operated businesses with no employees (think limo driver with her own car, childcare provider who runs a business out of his home, etc.).

Moreover, M&L point out that, "Even if tax cuts were limited to small businesses with employees -- and none of those proposed or enacted in recent memory have been -- they would be almost as wasteful and ineffective in creating jobs as cuts in the top income tax rate." That's because small businesses are not actually the drivers of job growth -- new businesses that grow into larger businesses are. Especially because the startups that do drive job growth make little in the way of profits in their early years, very few entrepreneurs (only 1 in 20) report even considering tax rates when deciding where to start a business.

Second, states are unlikely to attract most out-of-state entrepreneurs with taxpayer-funded incentives to relocate. Both survey and academic research indicate that startups typically form wherever the founders live at the time. And established businesses are more likely to expand in existing locations -- i.e., to stay in-state -- than to open new branches in different states.

As the chart below shows, almost 90 percent of job gains in the median state were "home-grown" between 1995 and 2013. Only 11 percent of the median state's jobs came from out-of-state businesses creating new establishments in the state and an even smaller 3 percent resulted from relocations of pre-existing jobs (which is, of course, a zero-sum gain from a national perspective). That's why M&L argue that relocation "should not be a consideration in formulating state tax policy or economic development policy more broadly." 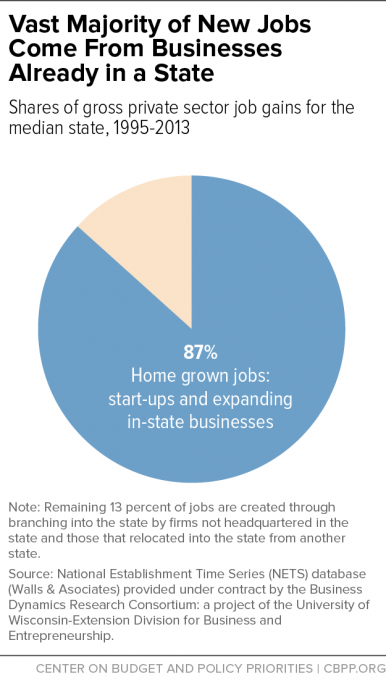 Of course, when you're running a state, any new job is welcomed (and state officials have little incentive to worry about the zero-sum problem). But tax incentives that may or may not drive employment marginally upward are a poor focus for state resources. They reduce revenues available for public goods like education and infrastructure, which, in addition to being important resources for city residents, are more likely to attract entrepreneurs.

In fact, entrepreneurs cite things like "access to talent" and "availability of local transportation options" much more frequently than they cite taxes when listing factors that contribute to their location decisions. As M&L summarize: "This suggests that states that cut taxes and then address the revenue loss by letting their schools, parks, roads, and public safety deteriorate will become less attractive to the kinds of people who start high-growth companies and the people they need to hire."

The lesson is clear: trying to poach jobs across state lines is an expensive waste of taxpayer resources. Investing in making your state a great place to run a business, on the other hand...now that's a smart idea.