Looking for a good review of traditional strategy and its evolution? Look no further than What is Strategy, Again? by Harvard Business Review's Andrea Ovans. From Drucker to Porter to so many offspring theories, she covers the bases for managers whose work centers on the moves and makeup of tangibles, whether of battle ships or potato chips.

But what about the intangibles? What about the critical yet soft assets, like brand, reputation and trust, that drive and are driven by new-economy markets? These are what matter in the games you play today. 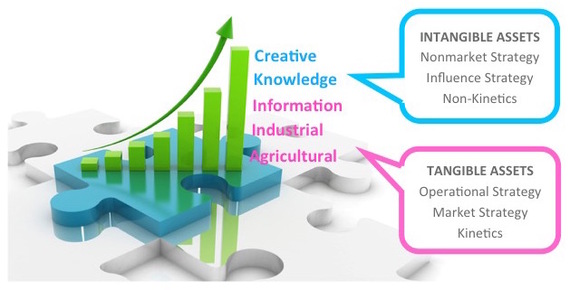 Ovans makes mention of the works of Lachenauer and Stalk and the martial arts parallels of Yoffie and Cusomano. But their importance is dimmed by legacy theories that don't explain what is both fungible and subjective. Conspicuously missing, for example, are the writings of MIT Sloan's David Bach and David Bruce Allen who frame the little-understood alter verse of so-called nonmarket strategies.

Despite the first world's march from agrarian to creative economies (see above), boardrooms and classrooms still conceive of strategy as an application of intellectual play toys, somewhat akin to the solutions and compounds of pre-Mendeleev chemists. Each is naive to the atomic makeup of their matter. Take, for example the four concepts offered by George Stalk, Jr. in the above-mentioned Curveball: Strategies to Fool the Competition: (1) Draw Your Rival Out of the Profit Zone, (2) Employ Unfamiliar Techniques, (3) Disguise Your Success, (4) Let Rivals Misinterpret Your Success. These are macro strategies that are more precisely explained by four irreducibly unique stratagems of the Playmaker Influence Decision System -- the testing plays called the Ping and Pause and their low-engagement cousins, the diversionary Deflect and Red Herring.

Sun Tzu might sniff that Stalk's curveball strategies are mere translations of his ancient art-of-war plays. In any case, they paint an incomplete picture of underlying moves and motives. Simply put, there is more to know about strategy. It's neither monolithic nor exclusive to business theorists.

As described by Ovans, strategy was born out of a fascination for competition, rules of supply and demand, and an obsession for the price and pricing of hard assets. It should now focus its curiosity on the soft assets that dominate and drive the markets of all things digital. Bach and Allen call them strategies of nonmarkets. I call them strategies of influence. However you see it, there are new worlds yet to be claimed by academics and entrepreneurs that tell us more precisely how markets behave and to better manage the game and gamesmanship beneath them.