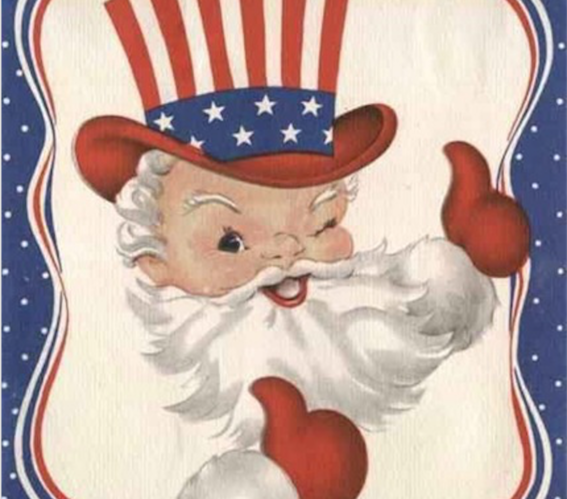 "He knows if you've been bad or good
So be good for goodness sake!"

The pile of presents under the tree on Christmas morning reflects how "good" we've been throughout the year. Santa Claus always knows who's naughty and nice. As long as we behave and really believe in St. Nic, we can expect packages, ribbons, and bows to magically appear on Christmas morning.

Of course it's romantic to picture a round-faced, well-behaved child tiptoeing into the glow of Christmas lights to find the toy she yearned for "the whole year through." A shy, yet undisguisable smile stretches across her face at the magic of Santa. Not to mention, the guilty sense of satisfaction that sneaks up when imagining a spoiled-rotten rascal get nothing but lumps of coal. However, as we all know, this isn't how it actually works.

It turns out Santa Claus is a lot like the American dream: both weave fantastical hymns of "hard work is everything" into the collective American voice. At some point, like Santa Claus, we must recognize the American dream as heart-warming folklore. It would be silly for adults to be mystified by the man in red slinking down their chimneys to deliver Christmas morning treasures. Similarly, it is dangerous for adults to believe their success in life, and the success of their children, is purely a product of effort. As much as it contradicts our sense of being American, and as important as high moral standards are to our nation's success, it is indisputable that Americans are not rewarded in life simply based on "how good they've been."

For example, children with wealthy parents, "blue-eyed" or bad, will likely swim in sparkling seas of wrapping paper after they're finished tearing through their presents on Christmas morning. Parents may use threats of Santa's absence to enforce "good" behavior, but we've all seen children receive the same amount of presents regardless of their conduct. After all, they're just kids. Unsurprisingly, the reality that children in wealthy families can be rewarded without constraint is similar to economic mobility in America's upper income brackets: only 8 per cent of children born in the top quintile of wealth will ever fall into the bottom quintile. Like the children of wealthy parents will have "successful" toy deliveries on Christmas morning, they will largely experience success in life.

Furthermore, many children will go materially unrewarded this holiday season, even if they happen to be paragons of goodness. These are the children whose parents cannot turn their homes into Santa's workshop because it is already too exacting to keep pace with reality. No tree, no presents, no holiday dinner: these families are excluded from the magical realm of the holidays in the same way they are forgotten in the American dream. For these families, America's poor, the seemingly mystical realms of holiday celebrations and the promise of mobility often remain aspirational; only one in 10 children born into America poorest 20 per cent of families will make it into the wealthiest 20 per cent of Americans within their lifetime. Unless the child is African American, in which case he or she only has a 3 per cent chance of making it to the top.

Yes, philanthropic organizations will ensure some excluded families taste holiday cheer. Missions will put on community dinners, and Toys for Tots and the Salvation Army will do their best to fill Santa's shoes delivering gifts. But with 16.4 million American children living in poverty, it is difficult to imagine charity will reach everyone in need. The well-intentioned bandaid plastered on poverty during the holidays is candidly analogous to America's treatment of poverty at large. It might be heart-warming to imagine America banding together to provide for its less privileged through volunteerism, but what excluded communities really need is systematic change: the opportunity to succeed without the need for philanthropy to fill the gaps. Systematic change will require more than holiday wishes. Decisive actions like improving the quality of education in low-income areas and doing away with persistent discrimination in the workplace and even in our public institutions are vital.

Finally, it seems important to ask a question so frequently forgotten: why is it that some kids are so naughty? Are they inherently bad? Or could it be a result of living a callous reality? In a statistically representative group of 30 American children seven would live in poverty, 11 would be minorities, six wouldn't have English as a first language, six wouldn't be raised by their biological parents, one would be homeless, and six would be victims of abuse. Being good isn't always easy for kids in America. So when we picture hell-raising adolescents it is important to empathetically consider their contexts instead of scornfully hoping they "get what they deserve." Similarly, America should aim to ensure the success of its children is not limited by zip-code, skin-color, or language.

It's as tough as learning Santa isn't real for the first time, but we must recognize the myth of mobility in America so we can take proactive steps to ensure every child has a chance at having a holly jolly holiday season and a chance at success in life.