By now there's been no shortage of reporting on the tremendous influence Super
PACs have had on the Republican presidential primary. From Sheldon Adelson
single-handedly extending Newt Gingrich's campaign to pro-Romney Super PAC
Restore our Future running more than 12,000 TV ads in Florida, their super-sized
footprint has been felt across the country.

In a new report, called Auctioning Democracy: The Rise of Super PACs and the 2012
Elections, we take a comprehensive look at Super PAC fundraising -- from their
advent in the wake of 2010's Citizens United Supreme Court decision through 2011
Federal Election Commission year-end filings.

Our findings confirm that Super PACs represent much of what is wrong with
American democracy rolled neatly into one package: they provide a convenient
avenue for for-profit businesses and wealthy donors to dominate the political
process with a flood of sometimes secret cash.

Contrary to the Supreme Court's flawed Citizens United ruling, for-profit businesses
should not be permitted to spend treasury funds to influence elections. This
spending is usually self-interested, and undermines political equality by allowing
those who have achieved success in the economic sphere to translate this success
directly into the political sphere.

Yet, Super PACs have provided a convenient avenue through which more than 550
for-profit businesses have contributed more than $30 million, accounting for 18% of
total itemized Super PAC fundraising since their inception. 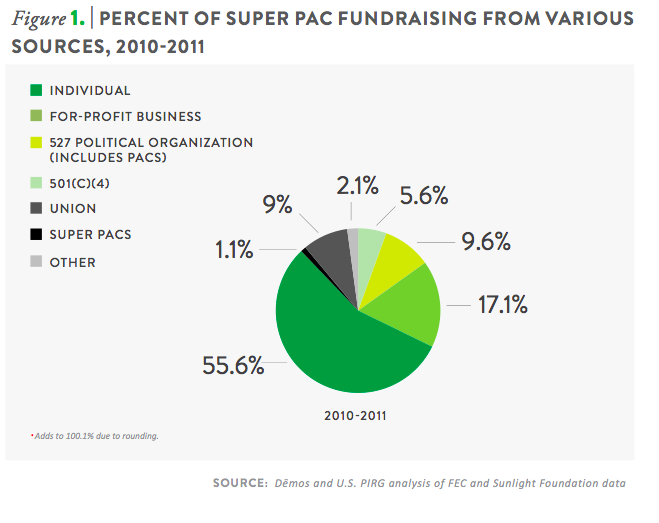 Despite lofty talk of disclosure and transparency in the Citizens United opinion,
Super PACs have provided an avenue for secret money to influence elections.

Our analysis of FEC data shows that 6.4% of the itemized funds raised by Super
PACs since 2010 was "secret money" not traceable to its original source, from
501(c)(4) nonprofits or other Super PACs that themselves raised secret money. 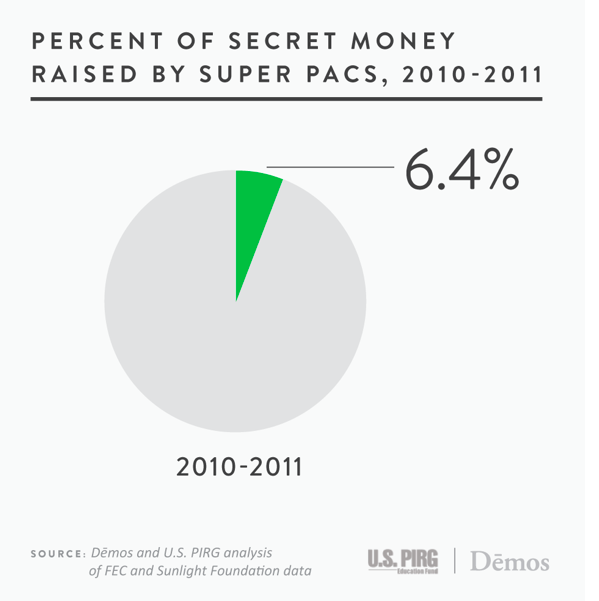 As the chart below shows, secret money spiked just before the 2010 election, and
we expect to see an unprecedented surge flowing to Super PACs as we approach
November. 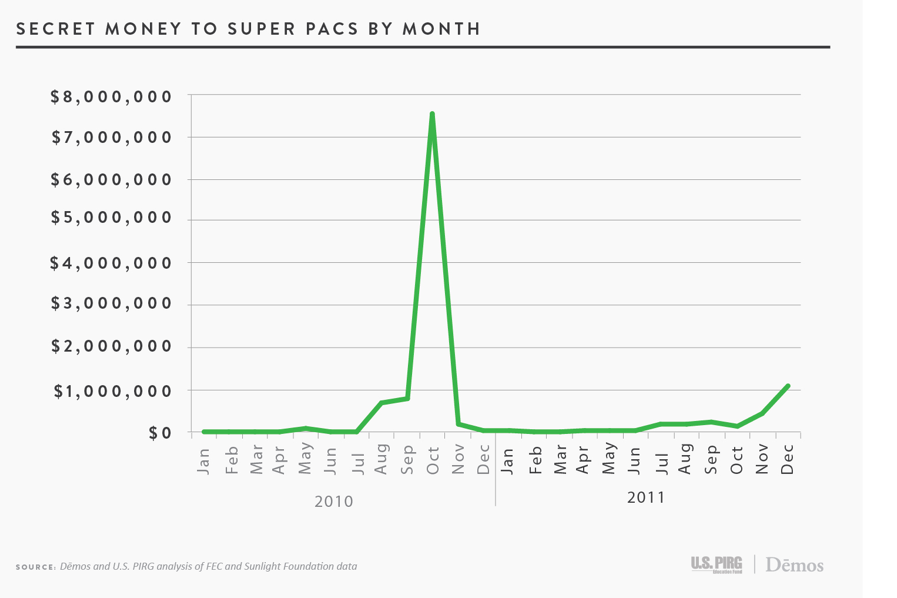 Our research confirms what has also been widely reported -- that the vast majority
of Super PAC fundraising comes from a tiny number of wealthy individuals and
institutions.

Of all itemized contributions from individuals to Super PACs, 93% came in
contributions of at least $10,000. Only 726 individuals, or 23 out of every 10 million
people in the U.S., made a contribution this large to a Super PAC. More than half of
itemized Super PAC money came from just 37 people giving at least $500,000. 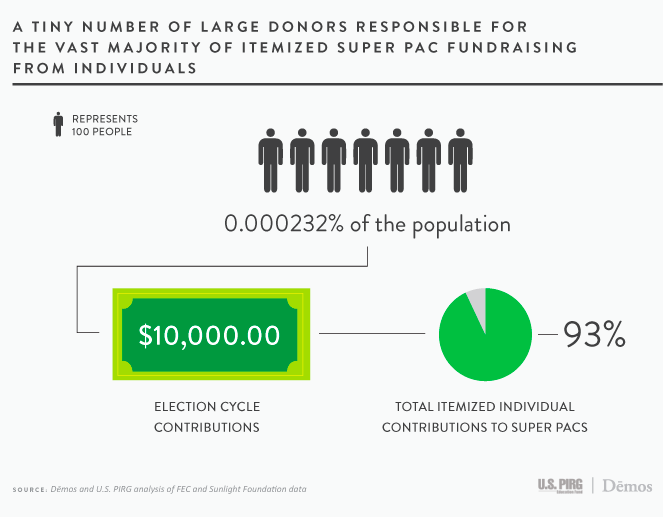 Our big-money system, fueled by Super PACs, is bad for democracy because it gives
wealthy individuals and institutions unfair influence over who wins elections; and
because, despite the Supreme Court's out-of-touch reasoning, winning candidates
are likely to feel more accountable to big donors who helped elect them than the
constituents they are supposed to represent.

This violates the spirit of the "one-person, one-vote" principle and a basic premise of
political equality: the size of one's wallet should not determine the strength of one's
voice in our democracy.

It might not systemically skew politics or policy outcomes if these well-heeled
donors were like the rest of us -- if on average they had the same life experiences,
opinions about issues, and political views as average-earning citizens.

But, unsurprisingly this is not the case. We've long known that large donors are
more likely to be wealthy, white, male, and conservative on economics.

A recent Russell Sage Foundation report confirms this. The authors found
meaningful distinctions between the wealthy respondents they surveyed and the
general public on economic issues such as the relative importance of deficits and
unemployment. 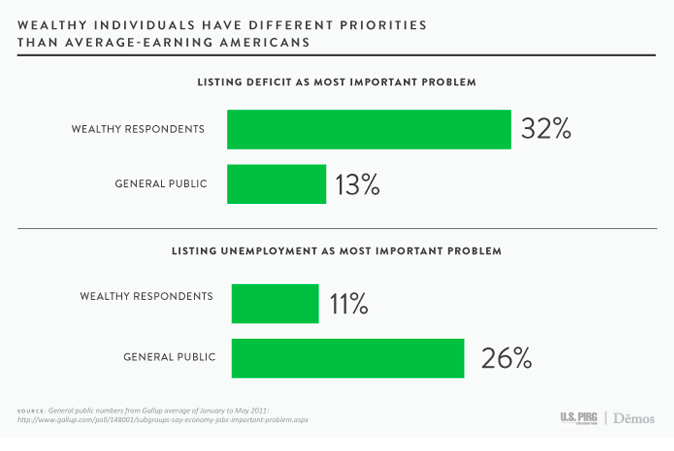 So, we've determined that Super PACs are like kryptonite for our democracy. What
can we do to fight back against this menace?

Our report names concrete policy solutions to help stanch the flow of unlimited
money into democracy.

To name a few, Congress and the States can add a layer of accountability to
corporate electoral spending by requiring publicly traded corporations to get
shareholder sign-off on political spending, as is the norm in European countries
where businesses are allowed to spend in elections. The Securities and Exchange
Commission can require businesses to disclose their political spending, removing
the opportunity to cloak spending through non-profits. And, Congress can enact
proactive tools that encourage more small donor participation in campaign
financing, like vouchers or tax credits.

But, ultimately, the people must act together through Congress and the state
legislatures to amend our Constitution to make perfectly clear that the First
Amendment is not -- and never was -- intended as a tool for use by wealthy donors
and large corporations to dominate the political process.