For most of the fifty years since she debuted at the Newport Folk Festival, Joan Baez has dedicated her life and music to fighting for equality and social justice, and for bringing about positive change in the world. On Wednesday, October 14, PBS stations nationwide celebrated her life, music, and activism in the American Masters documentary How Sweet The Sound that was released Tuesday on DVD with a companion CD retrospective. In addition to rare footage and Joan's narrations, the broadcast also featured reflections by musical peers including Bob Dylan, David Crosby, Roger McGuinn, Steve Earle, and political and religious leaders such as Rev. Jesse Jackson and Bishop Ernest Palmer.

Mike Ragogna: What music have you been listening to lately?

Joan Baez: Mostly what I listen to when I turn on my little iPod is opera.

JB: I listen to different voices, like Jonas Kaufmann. I just sort of discovered him. And my favorite is Swedish, Jussi Bjorling. Most people don't know about him, but to me, he's the greatest tenor that ever lived.

MR: Was your voice classically trained?

JB: Well, when I discovered I was mortal in my mid-thirties, I had to go into training or I wouldn't be singing now. I have to work very hard to keep this (voice), and the people I've worked with have all been opera trained. That was a big shock to me, that I'd have to train like everybody else in the world.

MR: Did you get your musical talents from your mother's or father's side?

JB: I'm not sure, maybe a little from both? Neither of them went into it in a big way.

MR: Did you have an influence on how your sister Mimi, also a performer, looked at music?

JB: Probably. We were very close. And the reason in the movie I say that I told her that I didn't think she should be a singer was that I was afraid she'd be in my shadow. She was a worthy singer, but I didn't want her to just be Joanie's little sister. She was a better guitar player than I was, always. When we were in Cambridge, we were a duo, and she began to sing on her own and then with Dick.

MR: After growing up on the r&b that played on your bedside radio, what got you into folk music?

JB: It was genuine and I couldn't stand anything that wasn't. Early on, it was the fusing of politics and music.

JB: During the "ballad" years for me, the politics was latent, I was just falling in love with the ballads and my boyfriend. And there was the beauty of the songs. But that was just a couple of years, then I was into putting both hats on which, I think, was just such a perfect fit.

MR: Did you become committed to the equal treatment of African Americans during your '64 tour of the South?

JB: No, it was way before then, because in '62, I went down there and--shock of shocks--realized that my audience was, by contract, segregated. That just added to my confusion and frustration and resolve.

MR: What are the roots of your philosophy of non-violent protest?

JB: My father becoming a Quaker when I was eight years old. My mother had taken us to Quaker schools, and she was the one who, when my father was searching for something meaningful, took him to Quaker meetings. And that's where he found some resolve and some peace. So we were raised with that discussion about violence and non-violence, and we all pretty much came up on the side of non-violence. That became my foundation with politics and my livelihood.

MR: Was your escorting the children to school in Grenada your first intervention?

JB: I don't think so, but maybe it was as far as going into the churches and being liable to be arrested. I think I'd been to the Birmingham Church before, and sung at Miles College when there were a lot of arrests going on. But Grenada was pretty hands on.

MR: Martin Luther King, Jr. himself called you on the phone for help, right?

JB: Yeah. He communicated with the school, I don't remember if I got that call directly.

MR: Performing at the March On Washington, you were in attendance when King gave his famous "Free At Last" speech. Did you think, as you were watching, that it was an important moment in American history?

MR: So you already have established yourself musically and as an activist, then the music of Bob Dylan comes to your attention.

JB: Let's see...somebody said to me, "You've gotta hear this guy," though I don't remember who that person was.

MR: During your documentary, you say this is where you saw the junction between music, politics, and the world.

JB: Yeah, all of it. I hadn't known that that was what was missing, but I knew it when I heard it.

MR: You've recorded a lot of Dylan's material. As you were giving weight to it, you were also establishing his career. It seems as though you not only were his champion, but also his in-tune, beautiful sounding voice.

JB: (laughs) Well, you know, it was something pretty extraordinary, pretty special. I think perhaps because of my already well-founded politics that I used the songs--I don't think Dylan had much interest in doing the politics. I backed up what I did with his arsenal of music. So I used it to its best advantage, and I also used what was not political, what was just beautiful. I mean, it's all poetry.

MR: When asked how you choose your songs, you've answered that they choose you. Do you remember how The Band's "The Night They Drove Old Dixie Down" chose you?

JB: I don't remember, I just remember that it was fun. It really was fun. You know, I'm not a "hit-maker," and I don't think I had any idea that it would do what it did. I was delighted that it did, I mean, I still sing it. People are so thrilled (by it), though, in some countries, it never took. But here in England, people come out of their shells and have a wonderful time singing it. So, I don't know what that magic is that makes those things happen. (Note: Joan graciously gave this interview while on tour in the U.K.)

MR: "Diamonds And Rust" was another magic moment. You've said when you began writing the song, it started as something else until Dylan phoned you. Then it became about him. That must have been one helluva call.

JB: He read me the entire lyrics to "Lily, Rosemary, And The Jack Of Hearts" that he'd just finished from a phone booth in the Midwest.

MR: What was the song about originally?

JB: I don't remember what I'd been writing about, but it had nothing to do with what it ended up as.

MR: After a decade of hard work and intensity, it seems like your touring with Dylan and his "Rolling Thunder" revue was a much-needed break. When you listen to a couple of the tracks from the tour, it sounds like you guys had way too much fun.

JB: Oh, I don't know, it was just crazy and wonderful. The first (tour) was just beautiful to look at. I kind of watched the whole thing and took part.

MR: Getting back to your activism, your celebrity helped bring attention to the antiwar movement, and your arrests and activities were often nightly news. What gave you the strength to get through it all?

JB: There was this Swedish ambassador who did some extraordinary things during the coup in Chile. He walked in front of a bunch of tanks with his flag in order to bring people--I think it was a Mexican embassy--across the plaza to safety. It was a very, very dangerous thing to do, and when I met him, I asked him what helped him do that. He said, "I can't tolerate injustice." And I thought, "Oh, there's the phrase I've been looking for." Whatever that (feeling) is, it's just there, and I can't stand it. It's not like I don't like it, it's that when I see it, I'm just driven to doing something about it, and I'm fortunate enough that because of the fame, doors open to me, a lot of them. So I use that, and as I said in the documentary, these are not sacrifices for me. The sacrifice would be if I couldn't do that.

MR: You've performed all over the world and have continued fighting for social justice and equality in places like Chile, Thailand, Bosnia...can you link some of the positive changes to your appearances there?

JB: Well sometimes, there are some blatant ones that are so pleasing, like the Velvet Revolution. (Vaclav) Havel said the last drop before it spilled over was my singing that song to him in Boinaslava. When he wrote that, I was knocked out. You know, you're only a part of something that never feels as though it's part of that larger part of something that made such a big change. But if that led into the Velvet Revolution and the guy says so, then that's something to really be proud of.

MR: And all your activism in the South had to have helped make a difference.

JB: When I talked with Bishop Ernest Palmer in Tuscaloosa about the changes that we made in the college that day, then yeah, I know that there were some irreversible changes that took place on that evening during that concert. So, I know there are some things that have happened as a result of what I was up to, always with other people. I had the tools and I used them.

MR: Did you love it when Havel joined you on stage with your guitar case during one of your concerts?

JB: (laughs) That was so sweet! Yeah, it's a joke now, he's always said he's my roadie. I'm going back at the end of this tour for a celebration for him. The Prague Symphony Orchestra has arranged "Swing Low..." and "Imagine" for me to sing with him.

MR: What do you think are the biggest challenges facing the U.S. right now?

JB: Aw, Jesus. I just read the Thomas Friedman article about the three bombs as he calls them--the nuclear one, the debt, and the other is climate. So, it's not just the U.S., although we proudly lead the way as usual. It's very clear to me that if we flunk out on climate change, we really don't have to worry about all the rest of it, you know? We won't have a chance to be quibbling about anything else because it's just all over.

MR: Still, you continue the fight.

JB: You know, I've never been an optimist. People say, "Oh, how do you stay such an optimist?" But I never was, I've always been a realist and it doesn't look so terrific right now. I don't see anything terribly helpful as far as climate change goes. We're in too much denial about it. It's like to survive, we stay in denial. But in the meantime, living as decently as possible seems to be incredibly important, you know, not just throwing in the towel and becoming a pig.

Here is the American Masters preview:

Early Joan Baez footage of her performing the folk traddies "I Never Will Marry" and "Barbara Allen":

Joan Baez - How Sweet the Sound 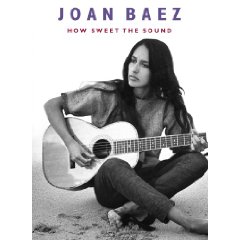