Although we are not at this time showing the Charlie Hebdo cartoons of the Prophet considered offensive by many Muslims, platforms are encouraged to verbally describe the cartoons in detail. This is key to understanding the nature of the attack on the magazine and the tension between free expression and respect for religion.

And this was from the BBC's editorial guidelines before its recent revisions:

Due care and consideration must be made regarding the use of religious symbols in images which may cause offence. The Prophet Mohammed must not be represented in any shape or form.

The NY Daily News even made the bizarre decision to blur one of the cartoons: 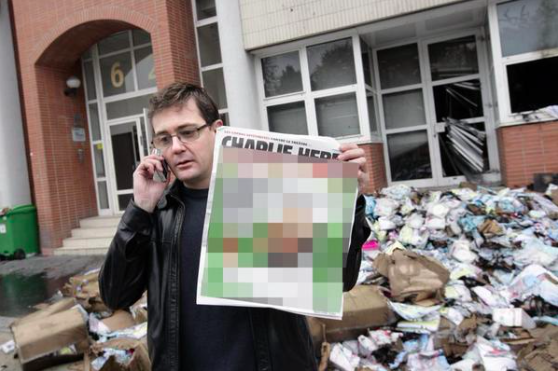 Add to this the rest of the major news networks in the United States: ABC, CBS, NBC, and Fox all said they will not show the cartoons for which 12 innocent people were murdered in cold blood this week.

There you have it. The United States is now living under Islamist blasphemy laws.

These are the Sharia-driven blasphemy laws that terrorists violently and effectively implemented in Paris on January 7. And most Western mainstream media outlets are obediently complying with them.

In his statement, President Obama hailed America's commitment to free speech, and referred to the terrorists as "cowardly."

Unfortunately, he had it the other way around. News outlets covering this story without showing the cartoons aren't curbing terrorism -- they're victims of it.

Disappointingly, some on the left are discussing the merits of the content that provoked this murderous attack -- which is a lot like talking about what a rape victim was wearing to "provoke" her rapist.

Let's be clear: our opinions about the Charlie Hebdo cartoons (which satirized all religions, not just Islam), like our opinions of the movie The Interview, are completely and utterly irrelevant in this context. If your condemnation of these attacks on free expression is followed by a comma and a "but...", you may be part of the problem.

The CNN memo references "the tension between free expression and respect for religion."

The next time you're in a hotel room, pick up the Bible and read through Leviticus and Deuteronomy. Or pick up the Quran and read Surah Tawbah or Surah Anfal. Then, think carefully about your definition of "respect."

In verses 8:12-13, the Quran endorses killing disbelievers. In Leviticus 24:16, the Bible calls for the killing of blasphemers. Both of these books are revered and respected by billions of people around the world. As for those who criticize and satirize them -- their weapons are pencils and laptops. Who should really be offended here?

I was on a HuffPost Live segment this week discussing the aftermath of the Paris shootings. One of the guests said there is a "fine line" between free speech and offending people's sensitivities. My response was simple: the whole point of freedom of speech is the freedom to offend. This is the reason free speech is so ardently protected. Most of the revolutionary changes in history -- from the civil rights movement to the advent of major religions -- started with a lot of offended people. This is why Gandhi and Martin Luther King, Jr. were assassinated. It's why Jesus was crucified, and Muhammad was expelled from Mecca by the Quraysh. Without the freedom to offend, there is no freedom of speech.

I recently received news that my friend Raif Badawi, currently in a Saudi jail, is going to start being publicly lashed 50 times every Friday after prayers at a Jeddah mosque. (Update: The first set of lashings happened Friday, January 9). This will continue every week until his sentence of 1,000 lashes is completed. His crime? Blogging. He is officially charged with "adopting liberal thought" and "insulting Islam."

Simply condemning these actions isn't enough. If we don't actively support and promote the right of writers and artists to express themselves freely, we are doing people like Raif and the slain Charlie Hebdo staff a great disservice. As Jonathan Chait put it:

The right to blaspheme religion is one of the most elemental exercises of political liberalism. One cannot defend the right without defending the practice.

If my fellow liberals don't stand up to Islamism now, the void is bound to be filled by truly xenophobic fascists who don't distinguish between rabid anti-Muslim bigotry and legitimate criticism of Islamic ideology. The rising influence of far-right parties like Marie Le Pen's National Front will only further alienate the more moderate Muslim majority that the left claims to support, potentially priming more of them for recruitment by Islamists. Shying away from honestly criticizing Islamism does them no favor.

Terrorism is terrorism, whether it kills people or kills our values. We're losing on both fronts.

Pakistani-Canadian author of The Atheist Muslim: A Journey from Religion to Reason