At this year's World Economic Forum taking place this week in Davos, Switzerland, we have reason to be optimistic. As the world's CEOs and heads of state gather, we can be certain of one thing - change and speed are needed to unleash the power of the 4th Industrial Revolution. Globalization, climate change, digitalization and leadership are all at the top of the global agenda.

On the bright side, the megatrends that are shaping today's world are also providing us with a once-in-a-lifetime opportunity to achieve a healthier, more sustainable and more effective society tomorrow. In a digital and interconnected society, the quality of life increases for everyone, if we set ourselves the right targets.

This is particularly true in the world's cities.
We know that efficient cities can generate growth and create jobs, reduce greenhouse gas emissions and improve the health of a growing population. More than half of the world's population lives in cities, and by 2050 another 2.3 billion inhabitants are expected to join the urban population. Our cities cover no more than three percent of the Earth's surface, but they are responsible for 2/3 of global energy consumption.

In Copenhagen, the capital of Denmark, the population is growing and will increase by 14 percent over the coming years. Like other rapidly expanding urban areas, it will have an impact on the surrounding region as well as on energy consumption and CO2 emissions.

But it is not just the capital of Denmark that is growing, so is the public and private determination to unleash the power of the 4th Industrial Revolution. 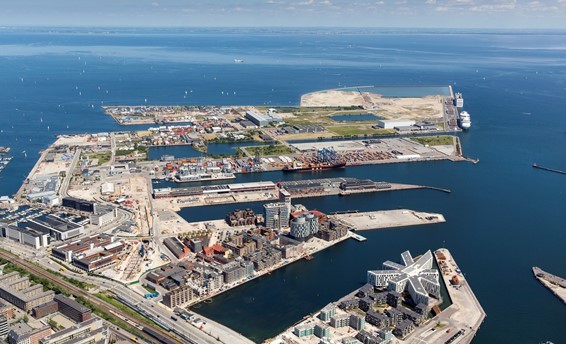 The city of Copenhagen already has one foot in the future.
In a great attempt to develop and demonstrate energy solutions available for the future, EnergyLab Nordhavn has been created. In the Northern Harbor area of Copenhagen, known as Nordhavn, Scandinavia's biggest urban development project is currently under construction. During the next 50 years, Nordhavn will be home to 40,000 new inhabitants and will generate 40,000 jobs.

The project utilizes Copenhagen's Nordhavn as a full-scale smart city energy lab, and demonstrates how electricity and heating, energy-efficient buildings and electric transport can be integrated into an intelligent, flexible and optimized energy system. Nordhavn will feature computer-based control systems that communicate with the energy system, individual homes, offices and devices, such as radiators. It will show us what we can do with the powers of digitalization.

One of the things that makes the energy system in Nordhavn unique is the high level of sustainability in the buildings as well as the connections with one of the world's most efficient and optimized heating networks - almost all of Copenhagen (98 percent) is covered by district heating and most of the energy in the system is CO2 neutral.

Improvements in the heating sector in the Danish capital are particularly important if vast energy savings are to be made and if Copenhagen's overall goal of being CO2 neutral by 2025 is to be reached. EnergyLab Nordhavn is a key part of this plan.

The example from Copenhagen's Nordhavn shows that with the right policy, the city of the future can be a reality today. A project like Nordhavn in Denmark is possible because the country has set strong policy goals, which have led to strong projects as well as exports and jobs.

Demonstration projects are good, but we need to scale them up and replicate them.
To do this, policy action is required, and there are several opportunities for action:

First. Let buildings talk to each other. Only a few countries currently allow individuals to sell the energy produced from their solar panels to their neighbor, while tax systems often discourage innovative and desirable new assets in the system.

Second. By making data from all infrastructures and individual homes available to the researchers, new business models can be developed.

And finally. Excess heat from, for instance, steel production or supermarkets should be regulated as renewable energy sources. We see positive signals from the recent EU winter package, but globally we still have a big job to do.

Digitalization puts us all - companies as well as societies - at a crossroads.
On the one hand, the creation of a better society is within reach, but on the other hand, we will experience higher complexity and a need for fast changes. In a complex world, both society and businesses have to adapt quickly, and be proactive and brave in our decision-making.