Benjamin Zycher, the head of the American Enterprise Institute's (AEI) energy studies criticizes an article I wrote earlier this week about the climate dangers of approving the Keystone Pipeline Project.

In that article, I said that the Earth's climate is on a trajectory to raise the mean global temperature by at least 3 degrees C by the end of the century; that the world is experiencing a rapidly rising frequency of extreme climate events such as heat waves; and that keeping unconventional oil reserves like Canada's oil sands in the ground is key to respecting the global climate budget.

Zycher accuses me of misrepresenting the scientific consensus of the Intergovernmental Panel on Climate Change (IPCC), which has just issued its AR5 (Fifth Assessment Report) on climate science. Indeed, he calls my opposition to Keystone "fact free." Yet it is Zycher who distorts, misrepresents, or simply ignores the IPCC conclusions. Let's look at Zycher's main claims.

Claim 1: "The basis for Sachs's assertion of a trajectory of "at least 3 degrees C by the end of the century" remains entirely obscure."

Fact. The IPCC presents scenario RCP8.5 to represent a case in which the world engages in very little or no climate-change mitigation, and emissions continue to rise rapidly as they are now doing. As shown in Table TS.1, p. 90, the mean temperature increase under this scenario is 3.7 degrees C, with a 5%-95% range of 2.6 to 4.8 degrees for the period 2081-2100. Assuming normality of the underlying probability distribution, the likelihood of exceeding 3 degrees C during 2081-2100 in the RCP8.5 scenario is 85%, and obviously higher by at the end of the century. Even more authoritative on the energy-emissions trajectory is the International Energy Agency's recent report, with the following alarming conclusion (p.1): "Policies that have been implemented, or are now being pursued, suggest that the long-term average temperature increase is more likely to be between 3.6 °C and 5.3 °C (compared with pre-industrial levels), with most of the increase occurring this century."

Claim 2. "Sachs's assertion about extreme events ignores both the evidence and the IPCC analysis."

Fact. According to Zycher, "In the most recent IPCC assessment report, the worst of the potential extreme events is the possible disappearance of the summer arctic ice, an outcome that IPCC now views only as "likely" with "medium confidence."

This is a remarkable statement, as the IPCC actually notes the trend towards more extreme events of several kinds in different parts of the world. Consider TFE.9, Table 1, p. 110. As any reader can easily check, the IPCC conclusions of extreme events for the early and late 21st century hold the following: 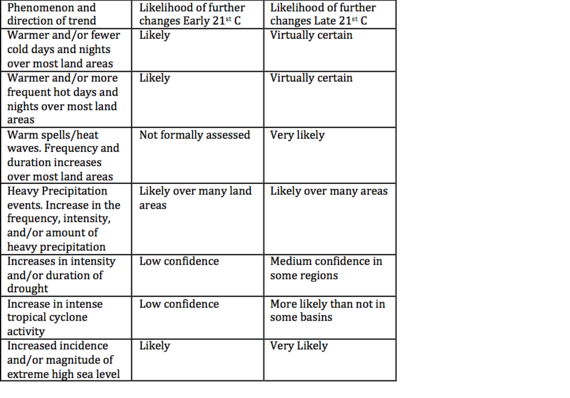 Claim 3. "Sachs's argument that Keystone XL is 'crucial' in terms of limiting temperature increases to 2°C is preposterous, particularly in a world in which GHG emissions are rising steadily as a result of industrialization in Asia and elsewhere."

Fact. I state in my article that, "If the world deploys massive unconventional oil sources like Canada's oil sands we will exceed the carbon budget, unless there is a simultaneous strategy to offset that excess carbon some other way." The conventional reserves of oil, coal, and gas greatly exceed the carbon budget that would enable humanity to keep the rise in mean global temperature below 2 degree C. To make the case that the oil sands fit within the carbon budget, one has to show that conventional fuel proved reserves should be stranded while more carbon-intensive unconventional sources should be developed. That case has not been examined, much less made by the US Government. It certainly has not been examined by the AEI, which has never presented an analysis of the global carbon budget. It is a highly dubious proposition that Canada or Venezuela's oil sands fit within a 2 degree C global carbon budget.

Claim 4. "[Sachs'] opposition to Keystone has nothing to do with GHG or climate effects. Instead, it is part of the broad view on the environmental left that there is just something not salutary about conventional energy..."

Fact. This claim is directly contradicted by what I wrote. As any reader can discern, I based my opposition to the Keystone Pipeline directly on the fact that neither the US nor Canadian governments has yet asked the right question: whether the oil sands fit within the global 2 degree C carbon budget. I raised reasons to doubt that these unconventional sources can be safely used consistently with global climate goals.

It is time for Zycher and, indeed, the American Enterprise Institute, to come clean. The AEI, despite its roster of distinguished academics, has failed to be constructive in the climate debate. It's time that the AEI puts forward a strategy to achieve the globally agreed objective of avoiding dangerous anthropogenic interference with the climate system.