Probably the worst thing about it all was getting my nerve up to board the plane in the first place. I mean I was scared out of my bagibbies. Sleepless the night before in a hole in the wall hotel room in Entebbe along the shores of Africa's Lake Victoria, man alive I was staring at the telephone when the wakeup call came through at half past four in the morning. To this day I wonder why I even answered.

I had returned to the African continent for Phase Three of The RailRiders 2012-16 Great African Expedition. The project is a 21st-century Ethnographical documentation of specific regions of Africa related to the 19th-century Victorian age of exploration. It involves seven overland expeditions over five years following the African expeditionary routes of the famed Victorian explorers to include Speke, Grant, Burton, Baker, de Brazza, Park, Cameron, Stanley and Livingstone.

Clearing Ugandan departure customs I was so nervous I had a real problem getting my trekking boots back on after the x-ray machine. I still ask myself what was that all about, for the folks monitoring the security machine at the time I passed by were changing shifts and only the pat down guard was on hand. Just who was reviewing the inner soles of my life that morning in the heart of Africa?

Once I sat down into my assigned seat on the Air Uganda one-way flight to South Sudan's capital Juba, there was literally no way out. I was flying into the planets youngest nation only days after the U.S. ambassador had been evacuated out. But I was committed or needed to be committed, depending upon how you look at what I do for a living. Either way it was sheer madness. 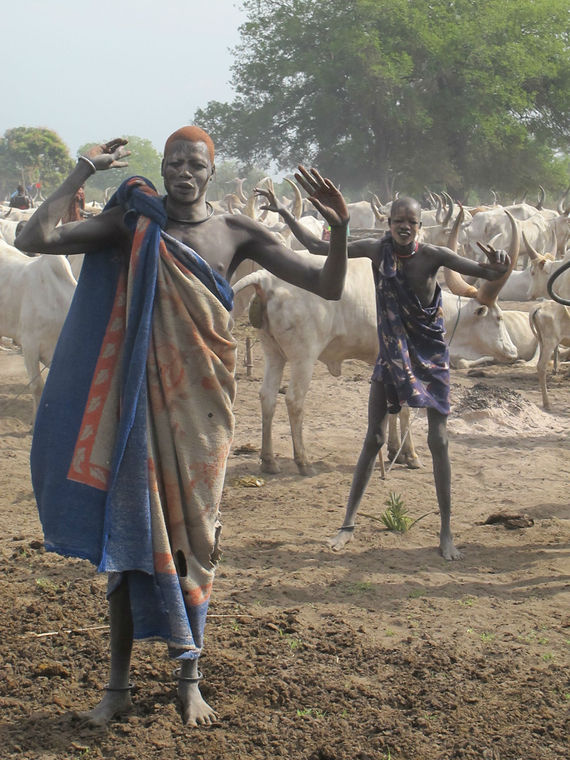 It was the first week of January 2014. The attempted coup d'état against the government of President Salva Kiir Mayardit was just a few weeks old and still in the headlines. Reports had it that some soldiers had returned to the barracks late on Sunday night after drinking all afternoon. Across the African continent, men drinking on Sunday afternoons is not just a way of life, hell it's an art form as they gather to prepare themselves for World Cup soccer matches that might not arrive to their time zones until the middle of the night. And by then they could care less, as long as the beer is bottled, it matters not if it's cold or not.

On that particular Sunday night in mid-December 2013, the soldiers came back drunk to roost and all hell broke out. Whether it was an attempted coup or not is now left to speculation. What it gets down to are the ethnic divisions that have been a way of life in South Sudan long before the young country gained her independence. Oil and power struggles compound the equation but at the end of the day, this is all about ethnicity. Those long ago drawn battle lines re- surfaced that night in December '13 and the world community has not been able to get that 'Jeannie' back in the bottle.

Indeed, when all hell broke out in Juba the world was caught by surprise. But the tragedy, well it's not the politicians flexing their muscles or the NGO's reminding us all that we need to give more, why we are used to that rhetoric. No the real tragedy lies with those innocence caught again and again in the crosshairs. For when the gunfire erupted and the curfews hit the streets of Juba, the soldiers and their tanks set up on street corners. Both the rebels and the government soldiers drained the bars of their beers.

In the countryside they raped, murdered and pillaged as they overran towns and villages. The government forces in the name of restoring order, the so-called rebels in the name of change. The civilians simply ran for cover in the bush, or for the borders with Ethiopia or Kenya or Sudan or for the most part, for Uganda.

South Sudan remains a land where men have to have enough heads of cattle to secure a bride so the herdsmen continue to rustle cattle. The Dinka and the Nuer, the two largest ethnic groups in South Sudan have no history of a centralized political governing authority. They are both governed by clans dominated by elders within a cattle culture where the number of cattle you have determines your true wealth.

There are an estimated 64 ethnic tribal groups in South Sudan. The ethnic divisions there will not be solved easily. For some moving away from age-old traditions has not been and will not be simple. The only real difference, in the past cattle rustling was accomplished with bows, arrows and spears. Today in the 21st century, the age-old quest of a South Sudanese herdsmen for a proper marriage dowry is done down the barrel of an AK47.