The hypnotizing argot of the art world is familiar to anyone who has ever tried to decipher a gallery press release or encountered a nebulous artist statement. It's a vocabulary of modified adjectives and abstract nouns, of concepts that get deconstructed and ideas that get interrogated, distributed practices and embraced ambiguity. In a recent article for the innovative web publication Triple Canopy, Alix Rule and David Levine coin the term "International Art English" (shorthanded "IAE," roughly equivalent to the popular nickname "artspeak") to describe this language, tracing its history and divining its murky rules. IAE "always recommends using more rather than fewer words," the authors write; it "sounds like inexpertly translated French;" is marked by an "uncanny stillness;" and has a heavy "dependence on lists" (guilty as charged). 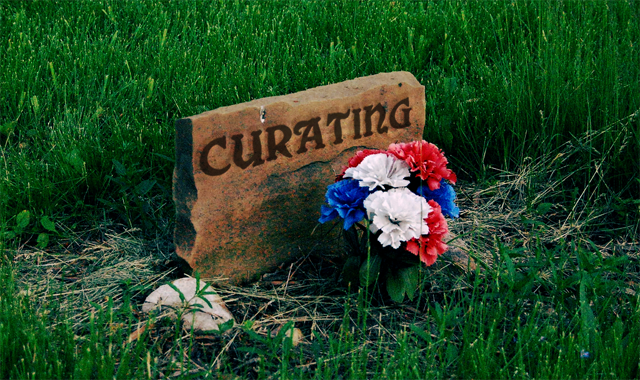 Rule and Levine have arrived at their findings by sorting through the past 13 years of press releases from e-flux, an online art project and distribution platform founded by artists Anton Vidokle, Julieta Aranda, Adriana Arenas, Josh Welber, and Terence Gower in 1999 that sends out paid-for announcements to its 90,000-plus-member email list. Rule and Levine loaded the collected press releases into Sketch Engine, a piece of software that analyzes linguistic behavior and trends from bodies of text. The tendencies that they discovered are obvious in retrospect -- an overreliance on adverbs, repetition of adjectives, and a preponderance of subordinate clauses -- but more striking is their outlining of the past and possible future of IAE.

Rule and Levine peg the origin of IAE to the critical journal October, founded in 1976 by art historians Rosalind Krauss and Annette Michelson. October introduced French post-structuralist philosophers to American audiences, translating the writing for the new publication. So begins IAE's departure from standard English. The approximations, vagaries, and quirks of those French-to-English translations, as Rule and Levine describe, took on the status of art-writing tropes and were widely emulated by less scholarly magazines, then galleries, institutions, and artists, in a process of semantic entropy. A language originally invented by and for the elite of the art world that "allowed some writers to sound more authoritative than others" trickled down and became destabilized in the process, eventually morphing into the pidgin we know (and don't love) today.

The current dialect of IAE, corrupted as it may be, is almost entirely absent of serious meaning, preferring instead to string together words that simply have the proper signifiers of highbrow intellectualism and postmodern slipperiness. The language is accessible to any global citizen semi-literate in art-world norms and familiar with the appropriate buzzwords, as evidenced in any number of only vaguely meaningful international biennale manifestos and exhibition announcements. IAE has lost its exclusive potential, at least for those inside the art world (for outsiders, I presume, the new is indistinguishable from the old).

The decline of high IAE has coincided with the rise of the Internet and the ability for anyone in the international art world to speak to anyone other member through platforms like e-flux using the common tongue of artspeak. The democratization and resulting linguistic decay of IAE have turned something pretentious and elitist into a more widespread linguistic tic. This process, I would argue, has even resulted in a major casualty: The verb to "curate" and the title of "curator," vocabulary that once belonged to the art and museum world, have now become overused clichés of the social media generation, drained of the potency they had previously.

Today, the verb "curate" can be applied to just about anything. The rise of social media, with ascendant platforms like Facebook, Tumblr, Svpply, and Pinterest, has lead to an increased awareness of how we present the things we like and the objects and brands we associate ourselves with. We now carefully choose just the right image and just the right product to display, building up an aggregate identity of small judgments. Choice as a creative or intellectual act was before the province of the curator. Now, it's possible to curate everything from a Facebook photo album to a Pinterest fashion moodboard, bookshelf selection, or pop-up shop of artisanal food products. It was not always thus.

In ancient Rome, "curatores" were government officials with administrative roles, overseeing public buildings, purchasing food for the state, and staging public games. By the 14th century, "curate" as a noun meant "spiritual guide," and by the mid-16th century, referred specifically to the paid deputy priest of a parish. In the 20th century, museums were the domain of curators, who took care of the objects in their collections. Frank O'Hara, to name a famous example, was the assistant curator of painting and sculpture exhibitions at the Museum of Modern Art in 1960. The first curatorial education program was founded in 1987 at the Centre National d'Art Contemporain in France, heralding its arrival as a unique discipline. By the first decade of the new millennium, curators like Hans Ulrich Obrist, Klaus Biesenbach, and Massimiliano Gioni had become celebrities in and of themselves for their exhibition making and related activities. "Curator" occurs 9,746 times in the 1999 to 2012 e-flux corpus (1,562.2 per million) and "curate" 3,204 (513.6 per million).

The title of curator was, until recently, art-world specific, and though the job was hard to define at times, it was the most powerful role for non-artist members of the art world. No longer -- the bubble for this particular word has now burst. Today, writers-as-curators and CEOs-as-curators curate the contents of object subscriptions at Quarterly, a web-based start-up that distributes collections of worldly goods as a publisher might sell magazines. The widely followed Brainpickings blog curates links based on their generic quality of "interestingness." Speaking at an international event series of lectures called Creative Mornings, artist Jonathan Harris argued, "Curation is replacing creation as a mode of self-expression." What he meant is that we no longer produce, we just intelligently consume, and the consumption is our primary outlet for satiating creative urges. Carina Chocano, writing in the New York Times, is more accurate in describing this curation as satisfying "visual addictions" rather than forming true self-expression.

Within the art world, International Art English is everywhere at once; it's the air we breathe, a medium for communication rather than the content of communication. What was once elite is devalued, a process that has coincided with the growth and gradual mainstreaming of contemporary art that continues in the 21st century. Similarly, but in a broader sense, the action of curating is now devalued to the point of meaninglessness, where to curate simply means to exist, or to select, as any competitive animal has always done, one thing above another, slightly worse thing. The curator is dead, victim to omnipresence. Long live the curator.

ARTINFO's Definitive List of the 30 Best Dressed People in the Art World, From Klaus Biesenbach to Olympia Scarry

Woody Harrelson and Frankie Hyman on "Bullet for Adolf," and the Unforgettable Summer of '83

"It Represents the Artifice of Sex": Kiki Smith on Times Square and Her Site-Specific Installation