It felt like we'd reached the end of the world when we arrived at Olympic National Park on the Washington State peninsula on our cross-country drive from Florida. For the last few miles of the 3,000-mile trip we came through a rainforest of huge trees reaching to the sky. Sunshine filtering through them made dappled patterns on the road. We emerged into a panoramic view of the Pacific Ocean, and I immediately ran to dip my feet in the water. 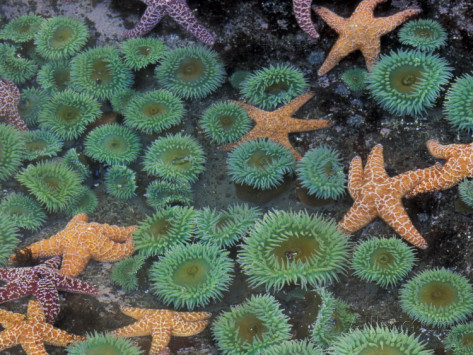 A profusion of starfish, sea anemones and other marine life can be experienced close up in Olympic National Park, Washington State.

To my surprise, there was a smorgasbord of marine creatures clinging to the rocks exposed by the receding tide - brightly colored starfish hanging out among sea anemones in the tide pools. It was all I could do to keep from touching them. Further offshore a family of sea otters interrupted their play to stare at us, as if they were as fascinated with the humans as we were with the wildlife. After an elegant lunch at nearby Kalaloch Lodge in their glass-enclosed dining room overlooking the ocean, with hummingbirds buzzing at feeders outside, we went and staked out our campgrounds on a bluff overlooking the beach.

The western terminus of our trip coincided with my first sighting of a Stellar's Jay; hiking with a group of scouts down to the beach on the other side of the peninsula where we watched a colony of sea lions basking offshore and ate my fill of wild berries (after the scoutmaster assured us they were not poisonous.) We had by then sublimated in the views at sunrise and sunset at the top of Cadillac Mountain in Acadia National Park; marveled at the unearthly natural formations in Badlands National Park; wondered at the engineering feat of Mount Rushmore National Memorial; and watched Old Faithful go off at Yellowstone National Park.

I was as excited as an eight-year-old at Christmas. The national parks made me feel reborn, with the enthusiasm of a child and the maturity to appreciate it. At age 44, they gave me a whole new lease on life. 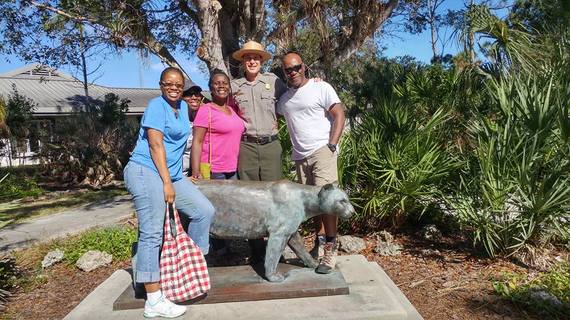 We met our beloved Ranger Alan Scott, representative to the South Florida Community Partners organization formed in the 1990s, and took this photo at the Coe Visitor Center in Everglades National Park.

So it was exquisitely, poignantly wonderful to get that same feeling 21 years later when I wrapped up 2016 with a tour of Everglades National Park among new friends. They were visiting their sister for the holidays from Japan, Germany and Connecticut and I happily agreed to take them to the park.

Their recent travels included Lourdes, Saint Tropez, Cannes, Nice and Monte Carlo, so our conversation on the 90-minute drive down spanned the state of our country and the world and what we could do to help ensure a positive future.

But once they entered the sacred opening onto the Anhinga Trail, I saw them transform into children again, in abject excitement and delight that left room for nothing but wonder. I pointed out the "snake bird," wings spread out to dry, and told them how the other Anhingas nesting in pond apple trees at the water's edge would soon be taking care of fluffy young chicks. A 12-foot alligator detached itself from the sawgrass bed and swam languidly under the bridge, giving us an unobstructed view of his long body and huge, wide open mouth. I pointed out the garfish and sunfish; shared how to distinguish a Great Egret from a Great Heron, and told them to be on the lookout for the secretive Purple Gallinule that we sighted on maybe 10 of 100 visits over the years. 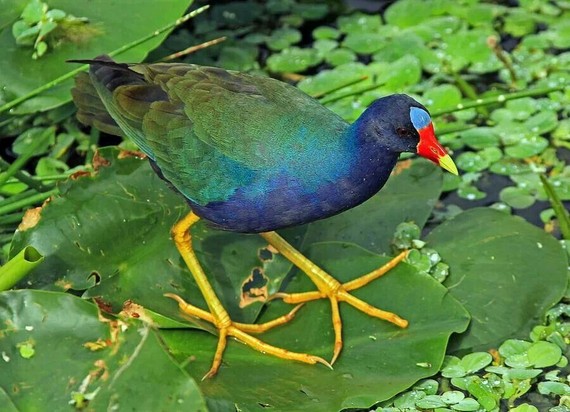 The Purple Gallinule is among the most secretive denizens of the park, and I live in high anticipation of seeing one delicately picking its way atop the lilies each time we visit the Anhinga Trail.

I didn't realize we'd attracted an audience until a gentleman with a large camera said, "We're sticking with you as you seem to know a lot." He and his wife were visiting from Toronto, and were excited when I mentioned that the two books I wrote about the national parks are in the Everglades bookstore.

Though it's been a few days, the feelings of pleasure remain with me. Better yet, I know our friends will take that feeling with them as they disperse around the world. There may have been 1,000 people on the Anhinga Trail that day from many nations, and the environment was peaceful, healing, awe-struck tranquility. 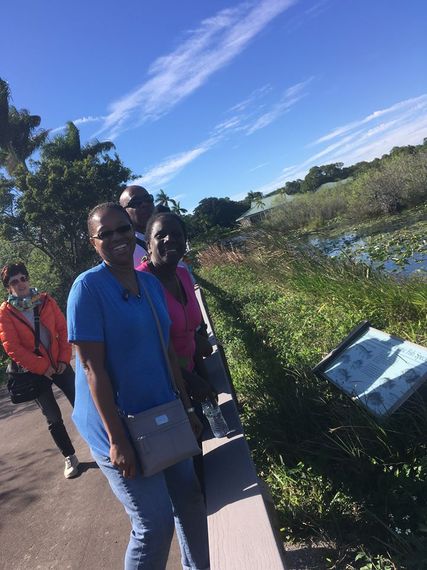 Hundreds of people were on the trail, yet all was calm and harmonious and we never once felt crowded.

So I'm delighted that President Obama recently expanded the public lands system, responding to the concerted efforts of five Native tribes and protecting their sacred sites in Utah and Nevada as National Monuments. The President used his authority under the Antiquities Act (which Pres. Theodore Roosevelt used to secure Grand Canyon for the people) to designate Bears Ears and Gold Butte in Nevada as National Monuments. Our Next 100 Coalition has been a big supporter helping push the designations forward, and I could hardly be more thrilled.

Members of the Republican Party are already furiously threatening to repeal the new monuments. Our public lands system and indeed our country may be increasingly vulnerable to an un-American focus of division and consumption in the coming administration, appropriately described as a kleptocracy in this informative piece.

But if you're among those expressing "fear" about our future, please think about how the very use of that word disempowers us and gives our power over to that which we fear. Compared to Harriet Tubman, the enslaved "Conductor" on the Underground Railroad whose story can be gleaned where it happened at Harriet Tubman Underground Railroad National Historical Park, we are sitting pretty, with instant access to our Congressional representatives, to organize on behalf of our values.

Can we be any less courageous and determined than Harriet Tubman now that it's our turn? Our parks and public lands help us to reset our lives, bring out our common humanity, our common history of evolution, our common destiny as a nation. Let's experience them more this year and use the lessons within them to strengthen our spine, to stand up for the ideals of liberty, equality and justice that are the highest aspirations of our democracy.