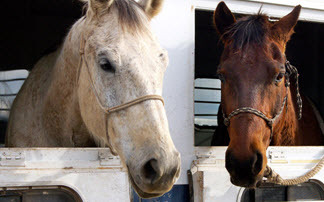 The massive, 2,000-page federal spending omnibus package President Obama signed today represents months of negotiations by the House and Senate. And while some of the loudest and largest passengers on that omnibus include defense spending, tax reform, and homeland security, a number of critical animal causes fortunately found seats as well.

Their inclusion wasn't a sure thing, but in a process known for deep political compromises, it's gratifying to see legislators not compromising animal welfare - particularly the protection of American horses and farm animals used in federal research for political gain.

First, the law will continue preventing the U.S. Department of Agriculture (USDA) from using taxpayer dollars to inspect horse slaughter facilities, effectively prohibiting such facilities on U.S. soil in the coming fiscal year.

To be clear, this is still a short-term and incomplete solution. It requires annual approval, and does not address the problem of horses being shipped to other countries for slaughter, a cruel process that can also endanger human health. This is why we encourage passage of the Safeguard American Food Exports (SAFE) Act of 2015, which would protect American horses from slaughter anywhere, permanently.

Combined with improved policies at the USDA, this spending measure will hold USMARC and other federal animal research facilities to the basic standards, inspections, and reporting requirements of the Animal Welfare Act.

Other included measures will help protect wild horses from slaughter and ensure proper oversight and enforcement of laws cracking down on puppy mills and ending horse soring.

Considering how these humane proposals were in doubt as recently as this week, it's tempting to think that we - and these victimized animals - dodged a bullet, but it should never have come to that. Ensuring animals are not tortured for industry profit is not simply a good idea; it's an imperative that represents some of our most basic values and obligations as Americans and as human beings.

Today, our leaders stepped up for those values. Making sure they do the same moving forward may depend on how loudly we - the people they represent - stand up and speak out. Please consider the many ways you can be a voice for stronger legal protections for animals.