The Greek market has been crushed by a lack of solvency, as a credit crunch in the public sector is wounding the economy and threatening the viability of thousands of companies.

As Athens and its creditors continue negotiations over Greece's debt, the lack of liquidity has frozen both the private sector and the domestic market. Greek retail stores have seen less and less customers in the past months and the financial situation of many of the country's companies is dire.

HuffPost Greece takes a look at the causes behind the crisis:

Bank lending: According to sources in the banking world, the situation is worse than in the correspondingly difficult periods of 2011 or 2012. The experts say that while the economy may have balanced on a razor thin precipice in those years, the stance of companies and the European Central bank was different then and the flow of money didn't allow asphyxiation.

Today, the European Central Bank, one of Greece's creditors, is providing funds in minuscule installments. As a result, banks are unable to satisfy even the smallest petitions for financing. Thus investments have frozen, as businesses also keep any liquid assets they have remaining for a future "difficult time."

The extended asphyxiation does not only apply to the financing of new loans but also to existing lines of credit. Those have become limited and many businesses are unable to fulfill their daily obligations as a result. 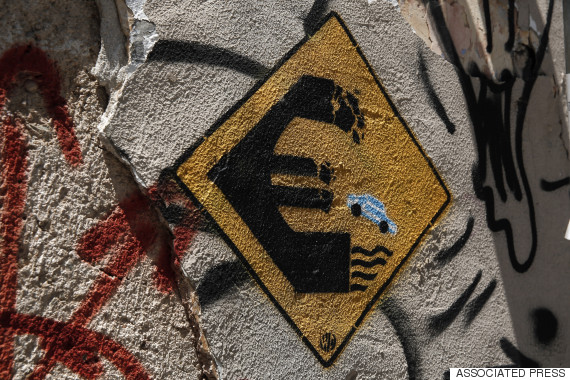 Graffiti depicting a car driving off a euro sign into water on a wall of an abandoned house in Athens, Thursday, June 18, 2015. AP Photo/Yorgos Karahalis)

Tax returns: Thousands of businesses are waiting in line for the government to return their taxes. Currently, beneficiaries must wait at least 90 days for a return on their general sales taxes. Data provided by the General Secretariat of Public Revenue show that as of June 17, the public sector owed individuals 856 million euros in general sales tax returns. Although that amount has decreased in comparison to to the previous week, the number of applications that have been delayed for more than 90 days has increased by 352, amounting to 4,410 in total. As a result, thousands of businesses are being deprived of substantial sums at a time when there are no alternative sources of financing. 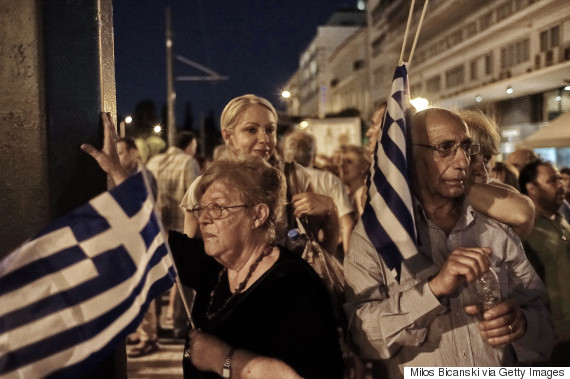 Protesters during a pro-government rally calling on Greece's creditors to soften their stance in the cash-for-reforms talks on June 17, 2015 in Athens, Greece. (Photo by Milos Bicanski/Getty Images)

Past due public debts: The state has also put the payment of past due debts towards private citizens on ice, to the tune of 4.8 billion euros. It is now considered a given that these debts will balloon even more in the near future, if the problem of financing the state is not solved.

Decline of profits: The only "hot" money that businesses could hope for is retail foot traffic. However, even that has gone from bad to worse in past months, because of ongoing political and economic upheavals.

Experts say the lack of solvency has created a domino effect. Businesses delay their payments to suppliers and employees. Thus the latter do not spend within the market, further weakening profits in the business sector. 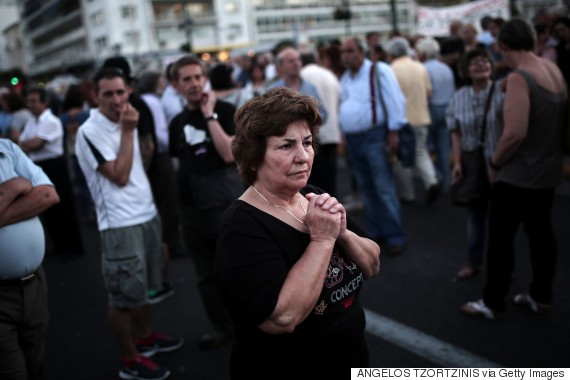 A protester takes part in a pro-government rally in front of the Greek parliament in Athens on June 17, 2015. (ANGELOS TZORTZINIS/AFP/Getty Images)

No more credit: One of the underlying causes of Greece's ongoing financial woes is the lack of trust on the part of suppliers, who often ask for payments in cash and generous advances. As a result, businesses exhaust even their final savings to pay off suppliers, while at the same time they are forced to fill their account books with debts and "IOUs."

More on the Greek debt talks:

- The Economic Crisis In Greece -- As Told By An Athens Taxi Driver - Why Greece Is Not Leaving The Eurozone - On The Blog: Greeks Are Just Trying To Stay Alive - 19 Pieces Of Athens Graffiti That Perfectly Sum Up The Attitude Of Young Greeks