Food waste is everywhere. It's all along the supply chain, from the farm to the manufacturing facility to the bagged lunch your second grader only ate half of before recess, and it happens for all sorts of different reasons. Ultimately, there is a lot of food waste. In fact, up to 40 percent of the food grown in the U.S. is wasted. The food manufacturing sector is working to solve this challenge, both with consumers and in their own operations, with big results. 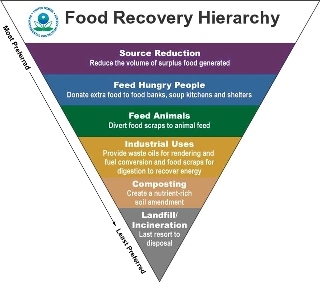 ConAgra Foods did just that when they streamlined their Marie Calendar's potpie operations to reduce the amount of dough that needed to be trimmed off the pie shell. This small change saved over 300 tons of pie dough in a single year. That's food waste that didn't happen- 300 tons of water, flour and other ingredients that were never used.

Like any business, companies in the food manufacturing sector are always working to improve efficiency. Food waste represents resource waste and is something the sector takes seriously.

General Mills is another example of a company driving for improved efficiency. Food waste in their operations is less than two percent of production volume and the company has reduced overall waste by 48 percent since 2005. At their Wellfleet, Ohio plant, which makes frozen pizzas, employees changed the way those pizzas are prepared. By heating the cheese just a little bit more, toppings stuck to the pizza better and fewer ingredients were lost. This change saved nearly 4,000 metric tons of toppings.

The EPA hierarchy says that the next best option for waste reduction is to "feed people," which means get food to consumers like you and me or redirect unused food to food banks and other food donation organizations. The food industry has some impressive efforts in this area. In fact, manufacturers donated over 800 million pounds of food in 2015 to Feeding America, the largest network of food banks in the U.S.

Del Monte Foods works with farmers in its California operations to make sure produce that goes unused by the company still goes through the packaging process and is then transported and distributed to food banks and those in need. Thanks to Del Monte's efforts 3.5 million pounds of what would have been unused food was sent to Feeding America in just the last three years.

Some food waste is unavoidable, such as trimmings and peels, and it's best to keep that material out of landfills, where it creates methane gas, an extremely potent greenhouse gas. And companies are finding a range of ways to recycle unavoidable food waste. Manufacturers recycle almost 94 percent of the food waste from their operations. Much of that goes to animal feed and the rest goes to composting or to create energy.

Food waste is a significant challenge in the U.S. and around the world. Last year, the Obama Administration set a first ever national goal of reducing food waste by 50 percent by 2030. We all have a role to play to get there. It will take a range of innovations like these and partnerships, which is why manufacturers, retailers, and restaurants teamed up in 2011 to form the Food Waste Reduction Alliance (FWRA). This collaborative effort seeks to reduce food waste generation, increase donation and recycle food waste. By sharing some of the ideas and best practices above, we can all move toward the nation's goal while helping the environment, those in need, and the bottom line.