This article originally appeared on Americanprogress.org.

It is well known that in 2013 -- the most recent year for which data are available -- women working full time, year round earned an average of 78 cents for every dollar earned by men working full-time, year round. Since this statistic compares all working women and all working men, it does not control for the different types of jobs that individuals hold. In all but one of the occupations for which data are available, however, women earn less than men. 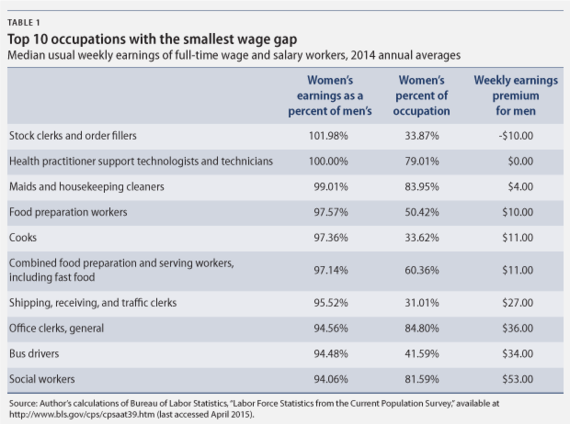 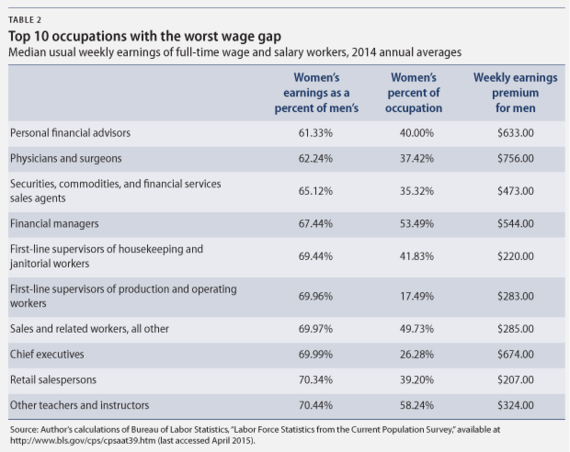 The Bureau of Labor Statistics tracked 535 full-time, "detailed" occupations in 2014 and, in the 125 occupations with comparable earnings data, men earned more than women in all but one profession: stock clerks and order fillers. However, slightly more than 337,000 women held those positions in the United States, meaning that stock clerks and order fillers made up only 0.7 percent of women in the full-time labor force. In addition, both male and female health practitioner support technologists and technicians have the same median earnings per week. This job category includes pharmacy technicians, veterinary technicians and surgical technologists, among others. Unlike stock clerks and order fillers, health practitioner support technologists and technicians are far more likely to be women than men, but they are still only a tiny fraction of full-time working women -- again, 0.7 percent.

At the same time, the 10 jobs with the largest wage gaps generally have higher median weekly earnings. Of those 10 jobs, 8 occupations pay above the weekly median earnings for women and 6 pay above the weekly median earnings for men. Only first-line supervisors of housekeeping and janitorial workers, as well as retail salespersons, earn less than the median weekly earnings for women, with a median wage of $596 per week for all workers.

Some argue that the wage gap is purely due to "women's choices," but such a characterization hides the cultural and social factors that go into women's decisions to enter or stay in a particular job. Moreover, even when women choose the same jobs as men, the wage gap persists. For example, male surgeons earn 37.76 percent more per week than their female counterparts. In real terms, this means that a female surgeon earns $756 less per week than her male colleague, which adds up to nearly $40,000 over the course of one year. And this does not apply only to high-paying, male-dominated careers: Women are 94.6 percent of all secretaries and administrative assistants, yet they earn 84.5 percent of what their male counterparts earn per week -- a weekly difference of $126.

It is also important to note that differences in women's education do not help explain the gender wage gap. In fact, education has helped shrink the gap -- but has not been nearly enough to close it. Women complete college and graduate school at higher rates than men; they earned 47 percent of all law degrees in 2011 and 47 percent of all medical degrees in 2014. All except one of the occupations with the smallest wage gaps do not require education beyond high school, while almost all of the occupations with the largest wage gaps require a college or professional degree. Furthermore, the Bureau of Labor Statistics has projected that, going forward, jobs that require advanced degrees will grow faster than those that do not; they will also continue to have higher entry-level wages than jobs that require less education. Since women are pursuing advanced degrees at the same or slightly higher levels than their male counterparts, it is clear that helping women stay in the labor force and excel in well-paying jobs after completing their education needs to be a societal and a policy priority.

There are many ways to combat the gender wage gap. Policies that help women balance work and family commitments -- such as paid sick days, paid family leave and fair scheduling practices, as well as equal pay protections and pay transparency -- can work to combat the many causes of the gender wage gap, both overall and within individual occupations.

Author's note: All data points listed in the tables and throughout this piece come from or are the author's calculations based on, Bureau of Labor Statistics, "Labor Force Statistics from the Current Population Survey," available at http://www.bls.gov/cps/cpsaat39.htm (last accessed April 2015).

Researcher for women's economic security and leadership at the Center for American Progress.