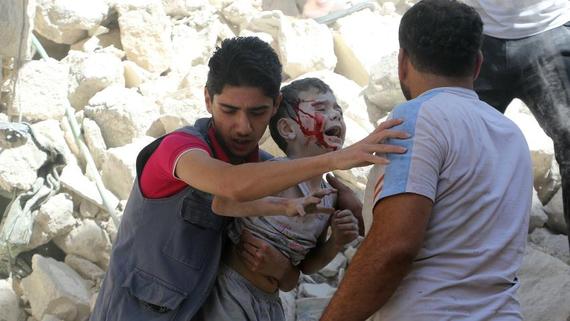 Last week, we received news that President Assad's regime in Syria had used chemical weapons on its people. Volunteer emergency workers working in the Sukkari district of Aleppo reported that Syrian forces had flown helicopters over the suburb and dropped barrel bombs of chlorine on the men, women and children going about their business below.

This is just the latest in the Assad regime's catalogue of brutality. Last February, Assad's air force launched a series of missiles at a field hospital. Medics rushed to find any signs of life from the rubble and pull them into an ambulance. Assad's jets waited, returned, and then flew over the ambulance as they drove towards the hospital. They then dropped another bomb on the ambulance. 25 civilians were killed, among them eight medical workers. But the jets were not finished. They flew over another field hospital and dropped another bomb. The Economist reported that Ahmed Tarakji, the president of the Syrian American Medical Society, said "there's no way that ... they didn't know what they were doing."

This is barbarism worthy of the worst monsters of global history. It is a marked regression in the application of the norms of war. And yet for reasons which I will come to, there is no prospect that Assad - the man in whose name those bombs fell - will appear at the International Criminal Court.

The first part of the blame must be laid at the door of the United States. At the very least the US could have enforced a no-fly zone. That, at least, would have prevented Assad's planes dropping chlorine on his people. But instead, President Obama refused. The US could have enforced a safe area for refugees. That, at least, would have allowed the many innocent victims of Assad's conflict to flee in safety. Instead, he dithered.

US inaction in the face of Assad's brutality has consequences. Last week, an umbrella group of Syrian opposition groups met in London to put together a proposal for a future for Syria without Assad. If Assad were to fall, it would be this grouping who would fill the vacuum. The less the US and its allies do to remove Assad, the less likely that future will come about.

One former member of Assad's government put it succinctly: "there was no pressure on the regime to accept this proposal." he said. "Why," he asked, "would [Assad] accept now when he did not in 2012; when the [navy] fleets of the US where in the Mediterranean and poised to strike him? [The Syrian opposition] have no pressure to bring against him because there have not been any developments in their favour."

But the geopolitical cover Assad receives is only half of the story. It is acceptable to electorates because of a climate of opinion. Those which uphold it are equally culpable. Assad is able to continue to commit his crimes in part because of the rhetorical cover provided by journalists like Seamus Milne, Patrick Cockburn, John Pilger and even political leaders like Jeremy Corbyn and religious leaders like Bishop Michael Nazir-Ali. All have all stepped up to the plate to sow confusion. By describing all opposition to Assad as "Al Qaeda" and painting Assad as the real victim of US aggression they have muddied the waters. Arguments for action against Assad receive less public hearing thanks to the work of their pens. 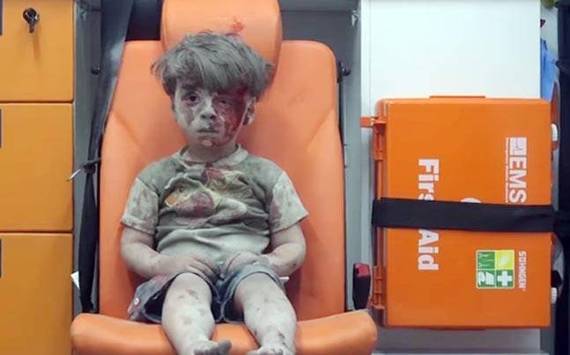 John Pilger, for example, has argued that Assad's survival is necessary to oppose ISIS, writing "the only effective opponents of ISIS are accredited demons of the west - Syria, Iran, Hezbollah." Patrick Cockburn has written that "there has to be some relationship between those who are attacking ISIS and the real forces on the ground." As if the only forces capable of attacking ISIS were those of Assad, an assertion which would be received bitterly by the Kurdish fighters who have done the most to repel the group and who are fully aware that there has intentionally been little engagement between Assad's forces and ISIS. The leader of the UK Labour Party, Jeremy Corbyn, also weighed in to support Putin's and Iran's entry into the war on Assad's side. He even went as far as claiming Iran was fully justified in assisting Assad with it's Shia militias and Hezbollah fighters as 'they presumably feel under threat that they may be next on the western countries hit list'. The Rev'd Nazir-Ali, not to be outdone, flew all the way to Syria with an unsanctioned British delegation for a face to face with Assad himself subsequently claiming on Channel 4 News that Assad was being "unfairly demonized in the West".

In all these cases, these useful idiots have been blinded. They see the world through the lens only of a fight between two manichaean forces - those of the 'imperialist' United States and those who resist its advance. Any grouping allied with the former must be bad and any grouping allied with the latter must, in consequence, be beyond criticism. It is the logic of the playground.

By muddying the case for action against President Assad, these analysts, journalists, and politicians become the accomplices to real suffering in Syria today. Dr Azeem Ibrahim is a Senior Fellow at the Center for Global Policy