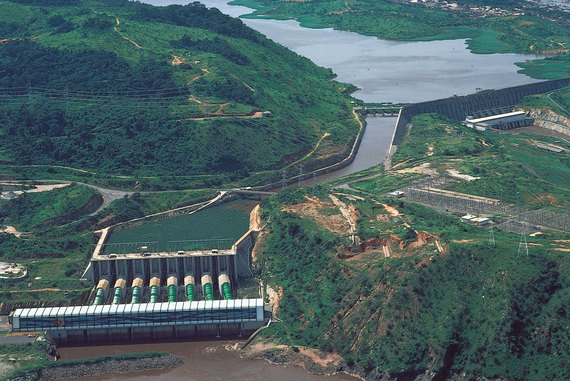 World Bank and government officials like to describe the proposed Grand Inga dams on the Congo as a "dream for Africa", which could electrify the whole continent at low cost. Instead, the world's largest hydropower scheme risks turning into a nightmare which crowds out better solutions and pulls the Congo's energy sector down the drain.

In March 2014, the World Bank approved a grant of $73 million to help the Democratic Republic of Congo prepare the Inga 3 Project, the first stage of the giant Grand Inga complex on the Congo River. By this time, the African Development Bank had already spent more than $50 million on feasibility reports for the dam. At 4,800 megawatts, Inga 3 would be the World Bank's biggest hydropower project ever. It will consist of a long intake canal from the Congo River, a 100-meter high dam, a hydropower plant and 3,400 kilometers of transmission lines to South Africa.

Inga 3 was expected to start generating electricity in 2021, and the groundbreaking ceremony was scheduled for October 2015. Yet a year into the project, the dreamers at the World Bank are waking up to the hard reality of mega-dams. By mid-2015, the DRC government was supposed to have created a special agency to carry out the project. Consultants should have completed resettlement action plans. A private consortium to invest in the project should have been selected, and negotiations for concession and power purchasing agreements were supposed to be underway.

As of today, none of this has happened. Of the three consortia that were selected for the final bidding round for the project, two turned out to be ineligible because of corruption and other malpractices. And after a feasibility process that has already lasted close to five years, the engineering companies recently recommended that the dam site be moved due to unfavorable geological conditions.

Given the history of the Inga 1 and 2 dams, which were built at the same location in the 1970s and early 1980s, none of this should have come as a surprise. As an excellent account recalls under the title, The River That Swallows All Dams, the Inga 2 Dam was propagated for producing the cheapest power in the world, yet ended up generating some of the most expensive. Due to the exorbitant delays and cost overruns, the project was a major factor in the DRC's debt crisis.

The Inga 1 and 2 dams never generated electricity at full capacity. In 2003, the World Bank committed to rehabilitating the neglected power stations and their transmission lines at a cost of $200 million. Twelve years into the project, the costs have more than quadrupled, and the work is far from complete. Recent World Bank updates reveal that so far, only one of the 14 turbines at the two plants has been fully refurbished. No new consumers have been connected to the electric grid yet. Under the transmission project, 286 kilometers of new lines have been built, but none of the 4,000 kilometers of existing lines have been rehabilitated.

Needless to say, Inga 3 and the Grand Inga complex (with almost 13,000 kilometers of new transmission lines) will be incomparably more complex than the rehabilitation of the existing power infrastructure in the DRC. "If we're struggling with a 5,000 megawatt project, how are we going to get a 100,000 megawatt project off the ground?" the head of an earlier failed effort to build the Inga 3 Dam commented. "Maybe this is mother nature's way of saying 'don't come and disturb me.'"

Luckily, practical alternatives to the mega-dams on the Congo River exist. The DRC has a large potential for small and medium-sized hydropower projects, which are more effective at providing energy to the poor, have a modest social and environmental footprint and can be built quickly. Small hydropower projects are already generating power in Eastern Congo, and mid-sized projects such as Zongo 2 are under construction in various parts of the country.

Southern Africa also has a huge potential of cost-effective solar and wind energy, including across the DRC border in Angola. Such projects can be developed in two to three years. In fact, the multi-billion dollar Medupi coal-fired power plant in South Africa which the World Bank approved in 2010 is experiencing massive delays, while the wind plants which were also part of the project have already started generating power. Such projects could already deliver benefits to the Congolese population if the development banks had promoted them instead of Inga 3 over the past five years.

The problem is that the World Bank and the government's strong focus on mega-dams absorbs all the political will, management capacity and money in the DRC's energy sector. The Inga dams are undermining the chances of other projects to go forward. Because the government utility is facing huge financial problems with Inga 2, China Exim Bank has for example stopped its loan disbursements for the Zongo 2 Dam, and the 150 megawatt project has been halted since November 2014.

What the World Bank sees as a "dream for Africa", the Financial Times has described "one of Africa's largest white elephants". Others have described it as a nightmare, a wet dream, and "a mirage ever shimmering just out of reach." It is time for the World Bank and the DRC government to embrace more feasible solutions and stop holding the Congolese population hostage to their multi-billion dollar dreams.