Few industries could be more impacted by the Internet of Things (IoT) than health care. Our health care system is impaired by rising costs and resistance to innovation. A possible solution? Use the IoT to power early detection and monitoring of chronic diseases.

One of the greatest advances of the twentieth century is health care. Our healthcare system was initially designed to: 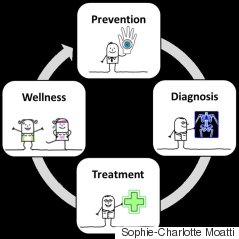 A gigantic ecosystem of hospitals, insurance companies, clinics, pharmacies, health regulators, drug makers and doctors was built on top of this framework so much so that healthcare, which was at the forefront of innovation a century ago, has now become a bastion of complexity and resistance to change.

While this has been happening, the progress of medicine have worked wonders and people now live longer and better. That combined with a more sedentary lifestyle has given rise to a new set of illnesses: chronic diseases. Today, 75% of the cost of healthcare is incurred for the treatment of chronic deseases. This is huge, and there are large marketing budgets spent to support weight loss, smoking cures, etc. However chronic diseases are still treated reactively, as if they weren't a common situation, like mumps and pregnancy. The healthcare ecosystem is stuck in what Clay Christensen calls the Innovator's Dilemma, which condemns it to be ultimately replaced by a new "paradigm." Enters the Internet of Things.

The key enablers of the IoT are smart devices, which make real-time tracking and remote monitoring possible, and cloud-based services, which power communities. Here are some example of what each could with the IoT do to support proactive healthcare:

Heart monitoring devices like AliveCor could help detect abnormalities and make sure you get to the hospital before it's too critical.

Powerful diagnosis tools such as MRI are expensive and hence only available in larger hospitals and clinics. With advances in computing, they will become more affordable to local medical facilities.

Expert surgeons could annotate 3-D rendering of specific organs and make their knowledge available in the cloud so that other doctors can benefit from their experience. Cloud data might lead to completely new approaches to diagnosis

Sophisticated prostheses built with tools like the ones made by e.g. Autodesk, could "augment" the human body of people with physical disabilities. At some point, healthy organs will even be 3-D printed.

Covering the cost of pricey procedures is often a barrier to health. Medical fundraising platforms such as Indigogo Life could allow people to support one another in times of hardship.

Wearable devices and activity trackers such as FitBit are allowing their users to reach fitness goals to enhance their health and wellness.

Cloud-based service like Omada Health help pre-diabetes lose weight and reduce the chance of getting diabetes.

Preventive healthcare powered by the IoT is still far from becoming a reality. Obstacles include:

Also as the healthcare ecosystem starts to incorporate the powerful advances of the IoT, business models will need to be figured out. Much of the opportunity may be in connecting IoT devices to existing platforms and services such as SAP and Oracle. Middleware services that securely bridge these legacy platforms to modern IoT and big data platforms through the firewall will enable many disruptive applications but will require much IT spending and jumping through multiple regulatory hoops.

The health care system we developed over the past century is not handling the early detection and monitoring of chronic diseases effectively. The IoT could help treat these illnesses preventively, but a lot needs to happen to turn this into a reality.

This blog post is part of a series on the future of health and technology produced by the editors of HuffPost ImpactX in conjunction with the world premiere of the trailer for documentary 'Detected,' produced by Ironbound Films, in partnership with Cisco. The trailer will debut on March 16 at the SXSW Music and Film Festival in Austin, TX. For more information about 'Detected,' click here. To see all the other posts in the series, click here