Theft has become a lot more complicated in the 21st century. In fact, I dare say victims are far more vulnerable than any time in history. These days, nefarious folks can get access to our email, bank accounts, credit cards -- heck, they can even steal our identities. All from the comfort of any given keyboard or touchscreen. And hoo boy can it ever be expensive.

In olden times -- a.k.a. when I was in high school -- theft was a physical, tangible act. It was harder to pull off, and the repercussions could be far more immediate and severe. Back in 1987, this was something my 11th grade cohorts and I knew all too well.

You see, during gym period one early afternoon, a classmate's watch went missing. Normally this would be quite the 'so what?' scenario, but what raised the stakes was A) the victim was a spoiled brat whose parents had sway with the school board, and B) it was a $5000 Rolex. To protect the guy's privacy, let's call him 'Gavin.' (Which is much nicer sounding than his real name, 'Sean.')

In lieu of chastising Gavin for bringing the watch to school and leaving it unattended, the faculty's higher-ups took a more measured stance: they rounded up all 22 gym class boys and stuck us in a room.

And there we sat in silence: sweaty, hungry, and kinda smelly. (We weren't afforded post-gym class showers.) The hope was that one of us would eventually confess, or we'd turn on each other and hand over the sticky-fingered watch bandit. (I'm surprised John Hughes never optioned the rights to any of this.)

Did we know who stole it? We had our suspicions but kept them to ourselves. Instead, we defiantly sat in the little room, minute after minute, hour after hour. Failing to break us, the higher-ups resorted to plan B: divide and conquer.

One by one, each of us was carted into a separate interrogation room, where we sat on an uncomfortable chair across from two stern faculty members. When it was my turn in the hot seat, the exchange went like this:

More time passed. Realizing they were crossing the threshold from 'detaining' into 'group kidnapping,' the school let us go home. And although the perpetrator was eventually caught (some Aryan-looking kid from Belgium), it wasn't on account of the 11th grade gym class crew. The interrogators never broke us.

Why? My theory is that when innocent people are treated like common crooks, they become less cooperative with authority figures and display heightened empathy toward actual criminals. So although Aryan-Looking Belgian Kid was the one who nabbed the watch, from another perspective, we all kind of did. And given the chance, we'd likely do it again. So suck on that, Gavin, you nouveau riche little turd. 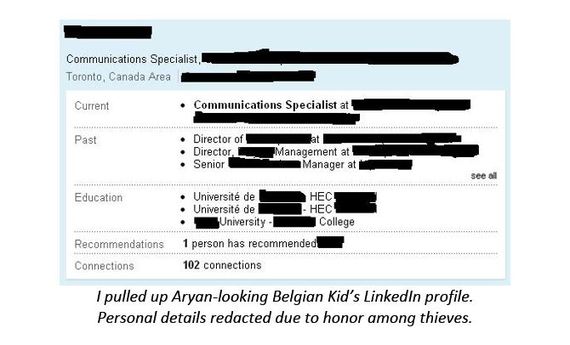 Of course, the bigger takeaway here is that theft has become far easier -- and way more anonymous -- in our digital age. And that's an unsettling combination. It's harder (well, for most of us) to take things from people we know. Even stealing from a stranger is more difficult when you know their face. Meatspace humanizes people, and humanity is the enemy when you're attempting to rip somebody off.

Unfortunately, humanity doesn't need to factor into the equation when you're jacking people's stuff online. The process is clinical, impersonal, and faceless. And this puts us all at greater risk.

Bottom line: be careful out there, because stealing's gonna keep getting easier the further we venture down the digital rabbit hole. Also, try to avoid taking your dumb Rolex to gym class. It's just common sense, dude.