Go ahead and read that headline again. 50 Ironman triathlons in 50 days in 50 states. There are no typos there. James Lawrence, who goes by the nickname Iron Cowboy, actually did that last summer. And he used acupuncture to help fuel his journey.

The Iron Cowboy's 50.50.50 has been documented by numerous media outlets. It's worth a Google search to understand the magnitude of what he endured to break his own world record of consecutive Ironman races and raise money for the child-obesity epidemic.

A lesser covered aspect of the Iron Cowboy's great adventure is his use of acupuncture. Specifically, he received laser-acupuncture treatments several times a week leading up to and during the 50.50.50. I recently caught up with the Iron Cowboy about how his consistent acupuncture regimen helped him achieve an unfathomably impressive feat. 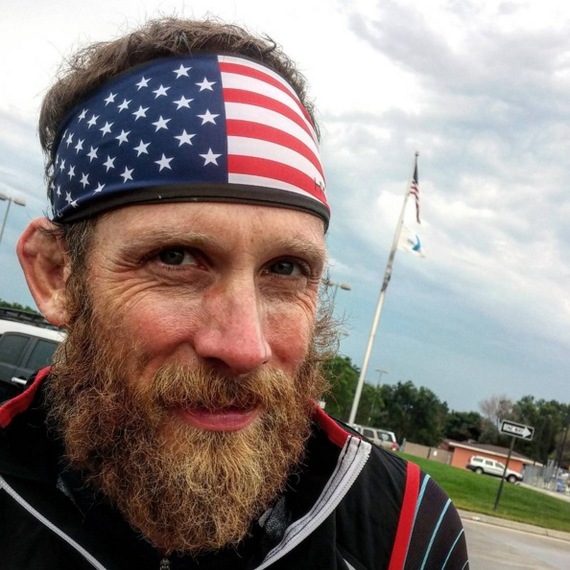 Iron Cowboy: One reason is because I'm not a huge fan of needles. I pass out when I see blood. Not that there's any blood involved with acupuncture, but the association is hard for me. There were some times when I was in dire straights, or when the laser acupuncture wasn't accomplishing what we needed it to, and we would use needles. I just wouldn't look. (Fellow needlephobes, check out this article.)

Author note: This is true. Laser-acupuncture protocols involve holding a laser at the site of an acupuncture point for mere seconds--usually 10-20, almost always under 60. Compare that with needle acupuncture, which usually involves the patient retaining needles for between 20 and 40 minutes.

How often did you receive acupuncture treatments?

Were your treatments targeted at anything specific?

If I had any issues come up during the event, he'd focus the treatments on that. But in addition, and even when I didn't have specific trouble areas, he did preventive treatments that were similar to the years of work we did leading up to the event.

How has acupuncture been helpful in your recovery and ongoing training?

I've continued to receive acupuncture in the same way I did in the two years preparing for the 50--preventively. My training now is still intense but it's not at the same volume it was last year. I don't go as much, but I still go in for regular preventive acupuncture treatments.

A common criticism of acupuncture is that we can't prove it works because Western clinical trials haven't consistently demonstrated its efficacy. What's your response to that?

There are so many things that work that can't be proven. I don't need a study to tell me what works for me. I know what works by being in tune with my body. I accomplished the 50 by doing a lot of things consistently--and acupuncture was one of them. I also use chiropractic, cryotherapy, herbs and supplements, essential oils, fruits and vegetables, garlic as a natural antibiotic.

To me, Western drugs should only be used in case of emergency. That type of medicine is a band-aid and a suppressant--it's not making you any less sick. The bottom line is this: I did something that science said couldn't be done, and I did it with the help of acupuncture. That's hard to discredit.

For more on acupuncture for athletes, read this article.

Sara Calabro is the founder of AcuTake, an easy-to-understand website about acupuncture and acupressure. To find an acupuncturist, visit the AcuTake Acupuncturist Directory.

More:
healthy livingAcupunctureNatural Healthtriathlon
Newsletter Sign Up
The essential guide to taking care of your mind and body
Subscribe to HuffPost’s wellness email
Successfully Subscribed!
Wellness delivered to your inbox