The past few weeks have brought some surprising developments and contradictions in the Keystone XL pipeline saga. Former Vice-President Al Gore told Canada's The Globe and Mail that he wished President Obama would cancel the pipeline project. Current Vice-President Joe Biden casually told an activist that he opposes the Keystone XL pipeline, although he's "in the minority" (echoing his recent gay marriage support ahead of the official change of position by the White House). On Earth Day, Obama's Environmental Protection Agency criticized Obama's State Department over the environmental impact review of the Keystone XL pipeline, citing "environmental objections." And finally, an unnamed U.S. official told Reuters that the president now plans to delay his decision on the pipeline even longer -- possibly until 2014. What is going on here? How did a pipeline that was supposed to win approval two years ago become such a contested topic among close allies?

I have been making a documentary film about the Keystone XL pipeline for the past year and a half, and the story has changed dramatically in that time. I have focused on a group of landowners and activists in East Texas who tried to stop construction of the pipeline -- variously through the courts, political activism and civil disobedience. Theirs are the untold stories of how this pipeline fight has continued to burn for so long. For them, the fight is personal; at the end of the day, they don't have anywhere else to go. By looking closely at their stories, I have seen the many complex layers of the battle, and I have glimpsed social change in action in America. I'm quite certain that the Keystone confusion recently swirling around Washington is intimately tied to what's been happening over the past few years in the woods of East Texas, on the ranchlands of Nebraska, across Native American tribal lands, and at the gates of the White House. Keystone XL has become far more than a pipeline. 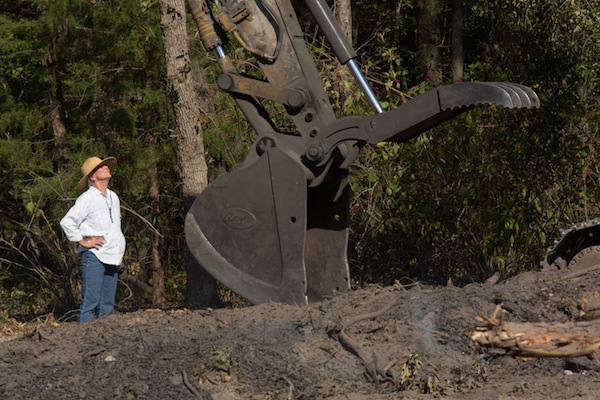 In an act of civil disobedience, Eleanor Fairchild stops construction of the southern leg of the Keystone XL pipeline before being arrested on her own land in Winnsboro, Texas. Photo Credit: John Fiege/aboveallelsefilm.com

Eleanor Fairchild is a perfect example of this transformation. Eleanor is a 78-year-old firecracker of a great-grandmother. Her late husband was a petroleum geologist and oil executive, with a 50-year career in the oil industry. She keeps her husband's old office just the way he left it, including a small vial that sits on the bookshelf with a sample of sweet crude from Yemen that he helped discover in 1984. Eleanor likes to say that the vial contains real oil, not that stuff that's going to be pumped through the Keystone XL pipeline. As Eleanor began to learn about tar sands, she realized that this pipeline could affect much more than her beloved trees, ponds and pastures. The pipeline represents a massive shift in our economy toward the extraction of oil and gas previously considered too dirty, inaccessible or unprofitable -- a shift that she's worried will have disastrous consequences for climate change and the future of her great-grandchildren.

Eleanor got arrested for the first time in her life protesting the Keystone XL pipeline in front of the White House in 2011. A year later, she was arrested on her own land alongside actress Daryl Hannah as they stood in front of heavy equipment to stop construction of the southern leg of the Keystone XL pipeline. The president had approved this portion of the pipeline in March of 2012, bypassing the federal permits required for the pipeline to cross the Canadian border. Eleanor has no regrets: "I thought to myself, Eleanor, with all of the things going on in the world, why weren't you out there fighting for the good long before this?" If her husband were still alive today, she thinks he would be proud of her.

President Obama is a master of symbolism and is certainly highly attuned to the growing meaning behind the Keystone XL battle. With this pipeline, he faces a decision about the economic future of America with outsized symbolic significance: will we go further down the old road of the oil economy -- no matter how dirty, dangerous or destructive -- or will we take a bold turn toward building a new economy based on low-impact, renewable, domestic energy? The president does not want to make this choice, even symbolically. He knows that approving the pipeline would be wrong for the country and for the planet. But doing the right thing would alienate the most powerful industry in the world and disrupt the very fabric of our oil-based economy. So he drags his feet.

In April, Rep. Lee Terry (R-Neb.) introduced the Northern Route Approval Act, which would grant Congress the power to approve the Keystone XL pipeline. The bill would allow the Republican (and some Democratic) backers of the pipeline to bypass the president -- while also allowing the president to avoid the politically explosive decision on the pipeline. If the bill makes it through both houses of Congress, we will see how the president reacts to the decision being taken away from him.

When Eleanor was first arrested, she was one of 1,200 people in the largest act of civil disobedience in decades. In February of 2013, she joined upwards of 40,000 people in marching on the White House to demand that the president stop the pipeline. In April, the State Department received over a million public comments opposing the Keystone XL pipeline. From Eleanor's farm at the front lines of the pipeline battle, to Americans in front of their computers, there is a massive organizing effort underway to turn the Keystone XL pipeline battle into a mandate to aggressively address climate change -- and it's working.