With the midterm elections almost here, the volume of attack ads is deafening. Spending on broadcast TV and national cable ads for U.S. Senate, House, and gubernatorial races has now topped $1 billion for the 2014 election cycle, according to a report released Oct. 29 by the Wesleyan Media Project. 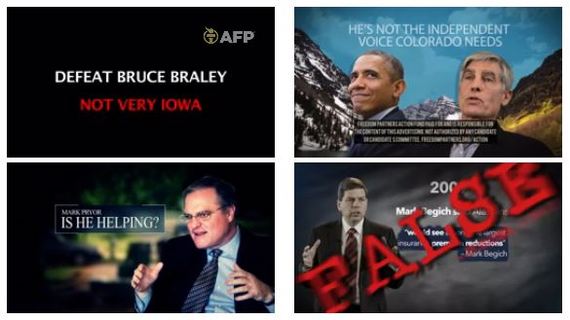 Of the 2.2 million political ads TV viewers have seen since early last year, 600,000 were aired by outside groups, not candidates themselves. Almost 40 percent of these came from so-called "dark money" groups, which are not legally required to reveal their donors.

Karl Rove hasn't gone away, and this cycle, his groups have already spent a combined $31 million on TV ads alone. But in light of Rove's disastrous 2012 results, this year's mega-rich GOP donors initially flocked to the multi-billionaire Koch brothers, who promised a different approach. And the Koch network has stuck to this new strategy, which involves using non-ideological appeals to convince independent voters to support Republican candidates, even if these voters don't agree with the GOP candidates' right-wing policy agendas.

It is on display in the Koch-produced ads that have been pouring from TV screens in some of the nation's most closely contested Senate races.

The "closing argument" ads shown above have been airing in six states (Alaska, Arkansas, North Carolina, Colorado, Iowa and New Hampshire) since October 22. They will run through election day in a $6.5 million ad buy from Freedom Partners Action Fund (FPAF), the super PAC launched last June by the Koch brothers.

Here's how USA Today described them:

Instead of going on the attack, the ads use a gentle, testimonial style. They feature voters against a backdrop of classic Americana scenes, explaining how disappointed they are that the Democratic incumbent has strayed from local values.

Besides Charles and David Koch, who kicked in $2 million each, top donors to the FPAF super PAC include New York hedge fund mogul and rising GOP kingmaker Robert Mercer ($2.5 million), who was sued last year for allegedly stiffing his household help; Texas oil billionaire Paul Foster ($1 million), whose association with the Koch network has previously caused controversy because of his position as chairman of the University of Texas System Board of Regents; and Arkansas poultry magnate Ronald Cameron, who gave $1 million.

FPAF is on track to spend nearly $25 million to influence the 2014 elections, part of $290 million that Koch-backed groups claim they will spend altogether. It is more than either national party committee spent during the 2010 election cycle.

The Koch brothers' latest twice-annual retreat for big donors to their shadowy political network was held in California last June. Rising GOP stars came to audition and preen for a crowd of super wealthy right-wingers, knowing the cash these multi-millionaires and billionaires wield could be instrumental to turbo-charging their campaign funds. Senate Minority Leader and fierce campaign finance reform opponent Mitch McConnell (R-Ky.) addressed the crowd. Three Republican U.S. Senate candidates also spoke: Iowa state senator Joni Ernst, and Congressmen Tom Cotton of Arkansas and Cory Gardner of Colorado. In August, secret tapes were released of what was said behind closed doors at this gathering, as the conservative plutocrats plotted how they could most effectively buy elections and advance their far right-wing agenda.

Of particular note were the remarks by top Koch brothers strategist Richard Fink, recently dubbed "Charles Koch's Brain" by Politico when he made #16 on their list of the 50 most influential thinkers, doers, and dreamers of America in 2014. He explained that by tailoring messages to the "non-ideological middle third of voters," they could sway them to support the fatcats' preferred candidates a lot easier than by using past methods.

"Yeah, we want to decrease regulations. Why? It's because we can make more profit, okay? Yeah, cut government spending so we don't have to pay so much taxes. When we focus on decreasing government spending, over-criminalization, decreasing taxes, it doesn't do it, okay? We've been reaching (this) third by telling them what's important -- what we think is important should be important to them. And they're not responding and don't like it, okay? Well, we get business -- what do we do? We want to find out what the customer wants, right, not what we want them to buy."

In the run-up to Nov. 4, North Carolina has seen 2014's most intense battle of the airwaves in a Senate race, as detailed by the Wesleyan Media Project's report. There were over 20,000 ads aired in the two weeks from October 10-23, with 36.3 percent of the ads coming from pro-GOP outside groups, and 30.2 percent from pro-Democratic ones. Freedom Partners Action Fund ads during this period have attacked incumbent Democratic Senator Kay Hagan over non-ideological issues such as high wait times at VA hospitals and the Affordable Care Act's supposed negative effects on the quality of N.C. education.

Any voter who would be swayed by these ads would surely be interested in knowing the facts they left out. Namely, that Hagan's opponent Thom Tillis has consistently called for massive federal spending cuts and embraced Paul Ryan's budget plan, which would negatively affect the VA system. Or that as Speaker of the Republican-led N.C. House, he passed a budget last year that shortchanged education spending by $481 million, according to The New York Times.

Iowa has experienced the second most intense Senate TV ad war, with over 17,000 ads aired during the same two week period in October. Pro-Republican ads have accounted for 9,581 of them, vs. 7,835 pro-Democratic ads, with 51.2% coming from pro-Joni Ernst outside groups and 34% from groups supporting her opponent Bruce Braley.

FPAF ads have been running non-stop accusing Braley of "disrepecting farmers" when he warned donors that a Republican-led Senate would see "a farmer from Iowa who never went to law school, never practiced law" become the next chair of the Senate Judiciary Committee. He was referring to Iowa's Republican Senator, Chuck Grassley. A mom in another ad says Braley is setting "the wrong kind of examples for children" because he missed votes in Congress. An online ad labels him "not very Iowa" because he complained to his neighborhood association about a neighbor whose chickens were roaming freely into his yard, fowl which were also the subject of other neighbors' complaints. It appears to be part of a six-figure digital ad buy from the Koch brothers' dark money group Americans for Prosperity.

These ads don't say a peep about Ernst's extreme right-wing views. Or the undisputed facts that Ernst opposed the five-year farm bill that passed Congress earlier this year, and has stated she is philosophically opposed to "taxpayer subsidies" like the Renewable Fuel Standard -- two things that directly benefit Iowa farmers. Or that as a state Senator, according to Politico, "Ernst missed nearly 40 percent of the votes in the Iowa state Senate during 2014," and "has also attended only a fraction of the meetings of the Iowa boards and commissions she has been appointed to since taking office in 2010."

And the chicken controversy is full of it, described by Slate as "how a guy mishandled the problem of chickens shitting on his lawn." At their Sept. 28 debate in Des Moines, Joni Ernst was ready to make hay over the issue. "Congressman, you threatened to sue a neighbor over chickens that came onto your property," Ernst said. "That's just not true," Braley replied. "I never threatened to sue anyone." Politifact rated Ernst's claim False, concluding "there is no material evidence that Braley threatened a lawsuit against the neighbor or was even considering one. Even the neighbor says that." 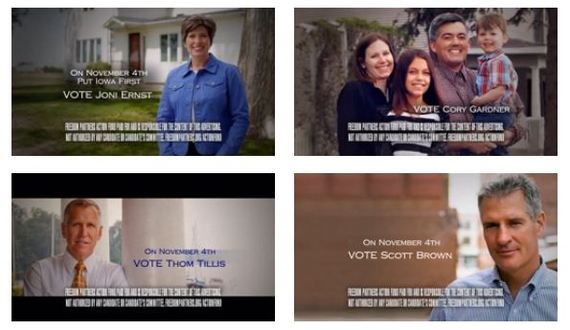 But as the Koch brothers and their ultra-wealthy cronies think they've figured out, a little chicken manure goes a long way when it comes to misleading voters into supporting the GOP.