Does being lesbian, gay, bisexual or transgender have anything to do with practicing mindfulness?

Sure. Over the years, many LGBT voices have made themselves heard within Buddhist communities, and have enriched the sangha as a result.

But the interesting part is just beginning--and it has less to do with inclusion than with insight. 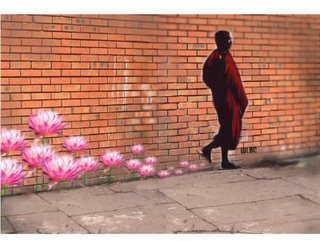 Understandably, most LGBT dharma teachers have tended to emphasize ways in which meditation can help promote healing from the traumas of homophobia, and ways in which dharma communities can themselves become more inclusive. For example, Larry Yang, who had led numerous retreats for LGBTQ people, has said that much of his work is "shepherding ourselves through the collective traumatization that we have as LGBT folks." Concurrently, some of the most inspiring engaged Buddhist work of the last several decades responded to the ravages of the AIDS plague; for example, Issan Dorsey, a gay Zen roshi, was one of the first religious leaders to reach out to San Francisco's gay community during those horrible years. And there are several LGBTQ sanghas across the country, such as Open Sky, Queer Dharma and Queer Sangha, as well as two Queer Dharma anthologies, and other essays and books.

There have also been attempts to find ourselves, or legitimate ourselves, in Buddhist communities and traditions. The Dalai Lama has been asked for his opinions about homosexuality, and reproved for not offering progressive enough ones. (His initial statements, made many years ago, essentially regarded all same-sex intimacy as a form of improper sexual behavior. More recently, he has said that if LGBT people are in wholesome relationships, then sexual intimacy is likewise wholesome.) Buddhist scriptures have been scoured for references to homosexuality (for monks, it is a form of improper sexuality roughly equivalent to other violations of celibacy; for others, the texts vary), while the Japanese tradition of same-sex love among monks and samurais has received some scholarly attention, though like most such traditions, it is scarcely known among laypeople.

But this is just the first stage. In fact, the interesting stuff is just getting started.

Consider, for example, the unique intersection between queer theory and the dharma. Queer theory, the academic discipline that grew out of gay lesbian studies in the 1970s and 1980s , has long held among its central tenets the notion that gender is socially constructed. How a man acts, how a woman acts; what clothes and tastes and professions we're supposed to have; even what anatomy men and women are supposed to have - all of these are socially constructed and inscribed in the mind, not the body.

Confounding assumptions and conventions about gender helps animate and articulate drag performance, camp rejections of gender binarism (no, Virginia, the world is not divided into masculine and feminine), articulations of queer sexuality, and countless other aspects of LGBTQ existence. None of us is man or woman, except insofar as we participate in cultural discourses of masculinity or femininity. And like other cultural discourses, what is "manly" shifts over time and place: there are cultures, today, in which holding hands with other men, wearing skirts, wrestling naked, and even engaging in forms of same-sex activity are all seen as entirely "manly."

The constructed nature of that which we take as given is also an essential part of the dharma. With regard to gender specifically, Buddhist scholar and feminist Rita Gross has pointed out in the context of feminism, gender constructs and gender identity are aspects of the ego. Queer theory, too, by pointing out the non-essentialistic nature of these egoic conditions, can thus be of tremendous use to dharma practitioners - and even those who practice secular mindfulness - regardless of their sexual or gender identity. Questioning our supposedly innate characteristics--that women are supposedly one way and men another; that women and men are a stable, binary map of all gender identity; that to be a "man" involves certain essential traits--is a gesture toward a more robust self-understanding and a more enlightened one. It's all drag, really: the identities, genders, gender roles, gender expressions. Queer theory and the evolving dharma of the West meet at the juncture of non-self.

These aspects of queer theory can also call out a potential trap in the creation of LGBT dharma communities. Any "identity" can become a kind of self-definition, another fixed aspect of the self that one might consider letting go. Particularities of identity can be useful doors into the dharma - if they function as doors, not cul-de-sacs.

To be sure, queer theory can seem rather abstract, and many of its academic proponents prefer it to remain that way. Yet it also captures much about how I experience my gender identity: as not fitting into boxes (including "gay"), as being defined according to a variety of contingent cultural conditions, and as intersecting with other vectors of oppression far more interesting than the gender of my emotional and physical life-partner. This, I think, is true for many practitioners, regardless of sexual orientation.

Even eros, which may seem so essential to our being, is part of the net of selfless causes and conditions, the empty phenomena rolling on, that constitutes our daily lived experience. When we speak, when we move, when we love - really what is acting are these endless causes and conditions, themselves the effects of previous ones. There is, as Sartre said, a great emptiness where we expect to find agency. Conditions are present, things move, anger arises, breezes blow--and there's no one minding the store, no essential identity even in those aspects of mind we consider most foundational. Yet as dedicated practitioners know, this insight ends not in nihilism but in liberation.

Let me bring it even further down to earth. I remember sitting in Penn Station in New York one morning while around me thousands of people were enacting and replicating memes installed by culture, religion, education, family. They were dressed in different ways, spoke in different ways, moved in different ways. I'm sure many of them took these styles and senses of self for granted. Many others, perhaps, did not. But what was happening? Cause and effect, non-self--this, as I have experienced it, is the liberation found precisely where some grieve the self's absence. I don't mean to dehumanize us with these metaphors and analogies; on the contrary, I mean to draw us into the same vast matrix of causes and conditions - including social conditions - and in some small way, forgive. That morning in Penn Station, tired and awaiting the train platform to be called, there was little "given" at all, and I noticed the arising of compassion and joy.