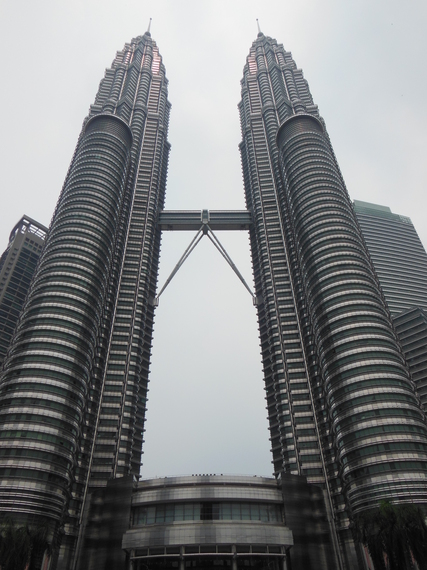 Never underestimate the power of good marketing. Politicians need it to win elections. Entertainers need it to gain popularity. Musicians need it to sell tickets. Skilled marketers can spin stories and create elaborate facades to manipulate the viewpoints of targeted groups of people. It can be done on a small scale, or on a grand scale.

Now that I've visited the Petronas Towers in the city of Kuala Lumpur ("KL") in Malaysia, I have come to appreciate the impact of successful marketing at the global level. In fact, I believe the Petronas Towers are part of a well-executed scheme to convince the world that the country of Malaysia, as embodied by its capital, KL, is as modern and advanced as the towers themselves. Unfortunately for Malaysians and for investors, this simply isn't true.

From 1998 - 2004, the twin Petronas Towers held the record for the world's tallest building. The iconic towers, connected by a bridge at the 41st and 42nd floors, are the work of Argentine-American architect Cesar Pelli. For his firm's work on the towers, Pelli's company was awarded the prestigious Aga Khan Award for Architecture in 2004. In 1999, the building was featured in the Sean Connery/Catherine Zeta-Jones action film Entrapment, which grossed over $212 million worldwide. With all the towers' publicity, it can be argued that the building pulled Kuala Lumpur out of geographic obscurity and helped brand Malaysia as a country with a bright future.

No doubt Malaysia has recently experienced significant economic growth. When the Petronas Towers were built, Malaysia had a Gross Domestic Product (GDP) of about $100 billion. Today, its GDP is over $310 billion. It has the third largest economy in Southeast Asia. Further, KL has established itself as a multicultural, world-class urban center, a "definite place to visit for world travelers." Its luxury offerings are the talk of travel bloggers, always on the lookout for the next best thing.

Yet the Malaysian Airline disasters of this past year have many in the global community wondering about the legitimacy of this up-and-coming nation. It has been over six months since Flight 370 went missing several hours after its take-off from KL. There is still no explanation for why the flight disappeared, and no wreckage has been found. Malaysia Airlines Flight 17 was shot down over the Ukraine in July. While evidence is mounting as to the cause of the disaster - an alleged surface-to-air missile fired by a pro-Russian separatist group - just why the plane was in harm's way in the first place is a question that has yet to be satisfactorily answered.

My curiosity was piqued by these contradictions; I wanted to see Kuala Lumpur first-hand. So when I was in Singapore this past July, I took a day trip over to KL to check out Malaysia for myself.

My first revelation was that anyone who thought they could predict Malaysia's future by looking up at the Petronas Towers should really be looking down into KL's mass transportation system. There they would find evidence of two Malaysias: one of modern efficiency; the other of third-world chaos. Riding the trains in KL provided me with a unique perspective on Malaysia's potential, and what it will need to overcome to achieve it.

The KL Express is the train that connects the airport to the city center, and it is fantastic. The ride was fast, reliable and inexpensive. Signage for the train is also excellent. The KL Express could give an investor hope that Malaysians, with some foreign support, could design and execute world-class programs.

The KL metro system, on the other hand, truly lives up to its name. That's because "kuala lumpur" literally means "muddy confluence." That may explain why it's so hard to get around on the metro. Or should I say the metros, as there are three different systems, each with its own operating company. Yet all the train lines are shown on one map, which makes the rider believe that connections can be made with a single ticket. Nope! One must exit the platform, buy another ticket and get back on a different train line to make certain transfers. Platform signage is inconsistent and confusing, and the lines at the kiosks are ridiculously long. Many of the kiosks only accept cash. If the poor design and execution of the system aren't bad enough, the stations themselves are filthy.

The disconnect between Malaysia's well-publicized modernity and its backwater reality is manifest in other elements of the country, too. Top of mind is the KL metro's cousin, Malaysia Airlines. As a result of the aforementioned disasters of Flights 370 and 17, the Malaysian government is poised to invest $1.9 billion in the enterprise as part of a major restructuring plan. Routes will be reduced and 6,000 jobs will be cut. However, success is far from guaranteed; the airline hasn't been profitable since 2010.

While some may tout Malaysia's year-over-year GDP growth rate as proof-positive of its economic progress, there has been heightened concern over other indicators. About 45% of Malaysia's sovereign debt is owned by foreign countries. Further, the ratio of Malaysia's household debt to GDP is an alarming 87%. High rates of foreign investment and consumer debt should sound eerily familiar to Americans; these are some of the factors that contributed to our recent economic crisis.

In its quest to achieve "developed nation" status, Malaysia will need an educated workforce to create and execute goods and services competitive in the international community. Yet the country's educational system is akin to the American healthcare system; it receives a significant portion of the national budget, yet performance is sub-standard on a global level. Malaysian students had some of the lowest ratings in the world in the 2012 Programme for International Student Assessment study. Without an educated younger generation, Malaysia may never be able to transform itself into an economic powerhouse.

But there may be hope. It cost $1.6 billion to build the Petronas Towers. That investment helped establish Malaysia as a potential global player. Maybe the Malaysian government should take the $1.9 billion it plans to invest in Malaysia Airlines, and use it instead to build the world's biggest school. Bragging rights and an educated populace? That may be Malaysia's ticket out of the muddy confluence and into the shiny new future that was promised by a gleaming, landmark skyscraper.