"Mom, what's Proposition 47 about?" My 10-year-old son asked this as we drove past a house bedecked with election signs.

He already knew he couldn't vote, so I offered, "You can fill out my sample ballot, if you'd like."

"What? Why are you laughing?" he asked.

"I just love that you're interested in politics," I said.

But really I was laughing because in my head I was hearing a ghoulish voiceover: Mwahahaha! From the compost heap of rotting Proposition 8 signs grows a dangerous menace: my sons. 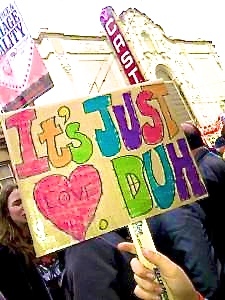 Like many kids who have same-sex parents, my 8- and 10-year-old sons were born into the marriage equality movement, into court battles and legislation, into triumphant wins and heartbreaking losses, into the rise and fall of California's same-sex marriage ban, Proposition 8 and beyond. They're seasoned activists, in second and fourth grade.

For children like mine, politics have never been anything but deeply personal and compelling, something you throw yourself into, body and soul.

They have learned some tough lessons along the way:

They have also learned some empowering truths:

• Stand up for your beliefs.
• Your voice matters.
• Even when you lose, celebrate what you have gained.
• Don't give up.
• Love is stronger than hate.
• Justice prevails.

These lessons, and my kids' passion for politics, have outlived Proposition 8, and they will outlive our country's few remaining same-sex marriage bans. While it hasn't been easy raising kids (or growing up) in the crosshairs of a civil rights struggle, I am grateful for the outcome: the marriage equality movement has spawned a new generation of engaged, informed, empowered, determined, politically active citizens who will continue to demand justice for all. 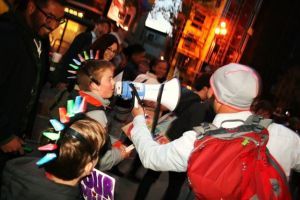