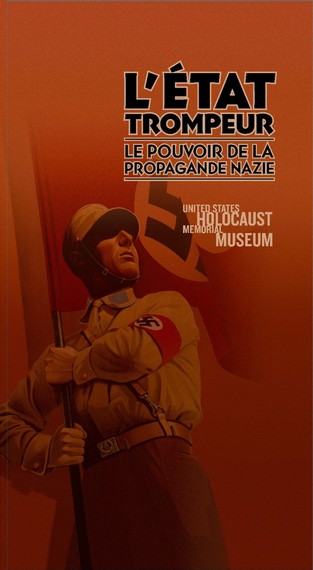 In the 71 years since the Allies defeated Nazi Germany and ended the Holocaust, Nazi propaganda tactics continue to be emulated. The sophisticated communications strategies and techniques that the Nazis employed with such deadly skill are alive and well in contemporary politics.

Rwandan génocidaires in the 1990s drew lessons from Nazi propaganda to incite violence and mass murder in radio broadcasts. Today, ISIS (Daesh or ISIL) produces slick videos for the Internet and social media to foster hatred and foment terrorism. As the Nazis well-understood technology can be a lethal weapon in the hands of an expert propagandist.

For this reason, UNESCO has decided to mark the 10th anniversary of International Holocaust Remembrance Day on January 27th under the theme, "From words to genocide." The United States Holocaust Memorial Museum is bringing its special exhibition, State of Deception: The Power of Nazi Propaganda, to the UNESCO Paris headquarters.

The Nazis honed their skills in a democracy in which they had to compete with over 30 other political parties for votes and support. Hitler crafted a public persona for himself as the "unknown soldier" in World War I; a common man who pulled himself up by his bootstraps to become leader of the Nazi Party and later the nation. This was a winning formula in Germany's fledgling democracy

Just as importantly, Hitler designed a trademark for his movement, the ancient symbol of the swastika emblazoned in black against a background of red and white. This too was a remarkable innovation for its time since most political parties did not have logos. Today, even those who know little about the symbol identify it with the Nazi Party; few trademarks have had such success.

In order to succeed in democratic politics, the Nazi Party marketed itself as the only political party representing all Germans, regardless of class, region, or religion; the Nazis considered Jews to be a separate race and not a religious group. All their political competitors were presented as special interest groups. Nazi propagandists also engaged in niche marketing, tailoring their messages to diverse audiences, including relatively small groups, such as bank employees and blind Germans. The Nazis created the first national political party in German history.

The Nazis were good listeners too. They engaged in public opinion gathering by eavesdropping on what Germans talked about in shops and on city streets. They then tailored their political messages to the desires of their constituents. When the Great Depression struck in 1929, the Nazis tapped into the fears of the population and channeled public discontent with the status quo into political support.

This strategy worked. In 1928, the Nazi Party claimed only 12 seats in the German parliament out of 500. Two years later, it captured 107 seats. In the summer of 1932, the Nazi Party won 230 seats, becoming the largest political party represented in parliament. No political party in German, or world, history had ever gone from such unimportance to political prominence in only a few short years. The Great Depression produced extreme public anxiety, which created a conducive environment for Nazi messages. 30 other political parties, however, had the same opportunity. Millions of Germans deserted their previous parties to cast their votes for a movement that had previously been deemed extremist and undesirable.

The innovative nature of Nazi propaganda made a difference. Although the Nazi Party never attained a majority in any free election, it gained power when Hitler was appointed chancellor in 1933 and destroyed German democracy in less than six months. Nazi propagandists proceeded to mobilize the populace around its radical agenda, which culminated in world war and mass murder. Hitler's propaganda machine repeatedly warned the German population that if they did not win the war it would mean their annihilation by "international Jewry." In carrying out the greatest genocide in history, the Nazis created a legacy for later practitioners of mass atrocities by crafting a justification for genocide: self-defense.

The Nazis, however, did not ask Germans to murder their Jewish neighbors, instead they asked them merely to sit back and let the state take care of the "Jewish problem." The SS, police battalions, and other units, which were heavily indoctrinated in Nazi racial ideology, then ruthlessly carried out the murder of millions of men, women, and children. Hitler's propagandists built upon centuries of anti-Jewish sentiment to foment hatred and foster a massive climate of indifference to the fate of Europe's Jews that ultimately led to the Holocaust.

On January 27, as institutions around the world commemorate International Holocaust Remembrance Day, it is crucial to consider the role that Nazi propaganda played in facilitating the mass murder of Europe's Jews and the persecution of millions of others.

It was not just the skill of Nazi propagandists that led to Hitler coming to power, but the inability of other political parties and the German government to craft equally persuasive messages and the willingness of millions of Germans to abandon mainstream democratic parties for radical alternatives. That's an important lesson to recall today as we confront skilled new propagandists promoting extremist, xenophobic, racist, or antisemitic messages that many of our young generations sadly find attractive.