The City of Los Angeles is all atwitter (and other social media) that the Los Angeles to St. Louis to Los Angeles Rams are coming back to their city. So what do we really get? As a marketing expert, I say it is an incredible tool to promote the city, but what is the cost we will all have to pay? The cost is that we, the product that all professional teams sell, are paying to BE the product.
In my opinion, the Rams found exactly the right city. They were not specifically invited back, but we're dumb enough to indirectly pay for up to $100 million of your stadium. That number comes from Inglewood Mayor James Butts, whose city will reimburse the costs of security, medical services, and shuttles to off-site parking during stadium events. This could be a win-win for both the city and the team, but what this really boils down to is what it gives them both the cities and the team in terms of MARKETING.
The stadium is going to be built in Inglewood at the old Hollywood Race Track because the City of Los Angeles didn't want to spend public money on a stadium and instead had an alternative plan using private investment. Because the NFL wasn't in control and couldn't dictate terms, the Rams went to smaller cities who could be easier influenced by money. Now the politicians in both Inglewood and Los Angeles get to talk about how they have a Pro Business Mindset and that this will be a boon to local government. When the NFL left in the '90s, they blamed government obstruction and people believed it. Now the politicians get the photograph of them at a ground breaking, with the team owners, with the players, forever memorializing them as a titan of Los Angeles, bringing back the NFL. They are creating marketing tools for their next political job.
What does the team get? A built-in loyal fan base. Not that St. Louis is not loyal, they are just not big enough. Los Angeles and its environs are about 10 times larger. From the marketing point of view, that is many times the eyeballs and ears who will see and hear the Rams' sponsors' ads on television, in the stadium, constantly on the radio broadcast, and in photos taken of the action. Plus, there are the naming rights to the Stadium.
Professional sports are a service and their fans are the product which is being served up to the advertisers. You, the fan, are being sold the branded beer, the branded hot dogs, the branded insurance, the official car of this team, the glass repair company which will take care of the busted window of your official car of the team which you broke when you were playing catch with the official football of the NFL during your pregame tailgate where, by the way, you used the official coals of the team on the official grill. All the while, you were wearing the team brand on your chest, pants, hat and everywhere else, marking you as a consumer of that team's advertisers. 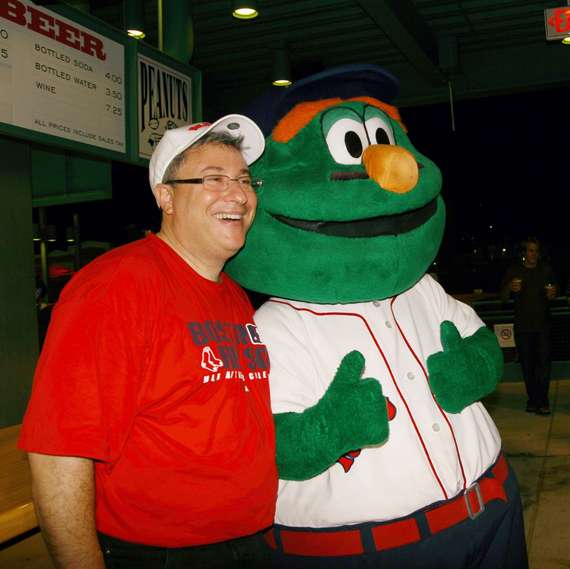 Sound cynical? I know. And as a fan of a couple of sports franchises, I completely understand how fanaticism works. But how would you classify them. Professional sports are entertainment. The image of the civic pride that they hide behind is an illusion. How do I know? When they win, how much of a rebate check do they cut you for being part of the team and buying tickets? Do they let you take the trophy home? Do they consult you on anything team related?
Team owners do not even need a thick skin when their teams are losers. In the NFL, 29 out of 30 of the teams are going to lose every year. They just need to be good actors, playing their part and saying their one line. You have heard this cliché, they all use some variation of it: "We're going to do everything we can to put a winning product on the field for the fans." The second part of that is "We know that it probably won't work, but we have to keep you in front of our advertisers, whether you come to the games, watch or listen. So there it is then." What they really want is to stay competitive, so that they have more home games which will deliver even more eyeballs.
This is why I am amazed when fans complain about how much a team spends on a revenue producing asset. I mean, a player. It isn't THEIR money being spent. They are going to pay more anyway because the costs always go up.
Every now and then, the team will have to change part of their management structure to make you think that they really care that you spend $200 a seat, but all the statistics show that the manager or head coach does not make that big a difference. Unless they can throw a 94 mph curve or, at 6 foot 8, 295 lbs., can put on a uniform. It is far more important for the team to have someone who can negotiate a great contract with a revenue producing asset.
What about the media complaining about the team over-spending on talent? They are just another part of the sales supply chain. Jobs are created by them comparing the performances of the revenue producing assets of each company (I mean the stats of each player of each team). The media are how most of those marketing messages are delivered to you.
So the Rams returning to Los Angeles is not about public pride. The NFL is a HUGE business and the non-profit monopoly has just moved one of its under performing sales units back to a city where it will increase the dollars brought into the coffers. You and I are just part of the required pomp and circumstance marketing that is needed to make it all keep working.
Congratulations!