The Super Bowl is 50 years old but the technology behind the biggest sporting event in America is nothing but the newest representation of leading-edge technology. From 360-degree perspective high resolution playbacks on the field, to vast amounts of mobile and social networking coverage of the game, this year's Super Bowl is surrounded by technology innovation. With more than 1 million people expected to descend on the San Francisco Bay Area, the level of security and surveillance is readying itself for the biggest national security event of the year.

For most chief information and security officers (CISO) the Super Bowl of business is everyday, not just the first Sunday in February. Customers and employee ever growing demand for the latest use of technology aimed at improving their productivity and overall experience, coupled with growing requirements for reliability and security, requires championship caliber information technology (IT) leadership, talent, agile processes and potentially disruptive models. Winning organizations achieve success by demonstrating trust, shared accountability, execution excellence and velocity, teamwork and an unquenchable thirst for reaching full potential.

Dr. Alissa Johnson (Dr J.), is the Chief Information Security Officer for Stryker and one of the most social CISOs in the industry. Before joining Stryker, Dr. J was the Deputy Chief Information Officer (DCIO) for the Executive Office of the President (EOP), responsible for keeping the IT lights on at 1600 Pennsylvania Avenue. In addition to 21-plus years of public and private sector IT experience, Dr. J is an avid sports fan, including basketball and football. I had an opportunity to connect with Dr. J and ask her about Super Bowl 50 and how preparation for the biggest game in town resembles the new and ever-changing IT landscape. Here is a summary of our conversation: 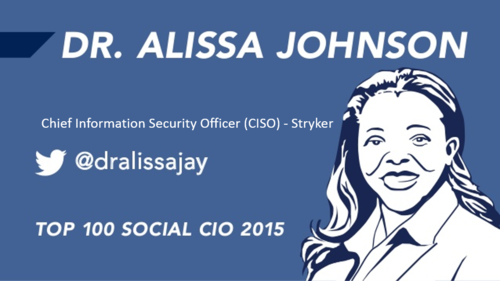 How does the IT landscape resemble the NFL season and Super Bowl 50?

While some would say this NFL season has lacked some of the luster and excitement of previous seasons, there is a resounding expectation that Super Bowl 50 will deliver on all of the hype we have been yearning for all year. I was thinking about how the technology landscape is changing and how this year's Super Bowl clearly resembles what we as technologists are seeing in our industry.

Information Technology is going through a huge transition. Major changes are occurring in the market -- cloud computing, mobile, Internet of Things (IoT), Dev Ops, and big data. I believe there are four ways the Super Bowl resembles the technology landscape:

1. Lifecycle Development versus DevOps: When I look at Peyton Manning, I see a structured approach. Everything about him is prepared in order to mitigate risk. His preparation is unmatched. He has a safe routine of studying and preparing. He is predictable in terms of process. He is a specific development lifecycle framework -- software, systems, pick one. He reacts to what the defense gives him whereas his opponent, Cam Newton, is flexible and will force action. Cam is DevOps! His actions are happening rapidly, changing frequently with lots of reliability. I'm not going to say which one I favor, just that there are distinct differences between the two, and the changing landscape requires a change in process.

2. Multi-purpose versus Single function: Peyton is single threaded, yet a very solid passing quarterback. With him you know what you are going to get. Cam Newton is a dual-threat quarterback. At 6'5" 250 lbs. he has the surprising agility to be a running quarterback, and is the first player in NFL history with at least 30 passing touchdowns and 10 rushing touchdowns in a single season. He's a quarterback that does two things very very well! I am a CISO that loves tools, but my pet peeve is hearing vendors claim to be able to do it all. The security operations tool that can detect, prevent, respond, and recover just doesn't exist. So stop trying to sell it to me! I can appreciate something that is good at more than one thing. A single threaded tool means that I have to search for others that can help fill gaps, but multifaceted tools not only help my security strategy, but they help me with my budget as well.

3. Traditional versus Non Traditional: Super Bowl 50 marks the fight between two forces. I am not talking about a fight between two great teams. That goes without saying. I see a fight between two different styles of quarterbacks: a traditional quarterback in Peyton Manning versus the non-traditional new wave quarterback in Cam Newton. Both are experts in their style, which is what makes this Super Bowl a very interesting discussion when comparing it to the current technology landscape. We see the same thing across our industry. Older generations who grew up in a traditional model sticking to what they know and what is comfortable to them, while at the same time admonishing the style of the younger generation, admonishing the disruption, and shunning from change.

The new generation is more flamboyant, agile, with playful antics that disrupt the status quo. Both very serious about their craft, but show it in unique ways that only their fans can appreciate. We saw the same thing in the White House. The traditional style of play versus the non-traditional, non-bureaucratic method of the Silicon Valley Techies disrupting government. Both definitely have their place, and given the right situation and environment they both excel and are both necessary. People want to compare and say technology models should mimic Silicon Valley, but I am one that thinks both are needed to create true greatness. We need an agile environment that can swiftly change from one style to another.

4. Millennials versus The Rest of the World: I have read lots of articles on how Cam Newton should behave during this year's Super Bowl. In fact, I have read just as many articles that discuss the true decorum folks think he should display as a quarterback. Those thoughts will never resonate with him. Millennials aren't successful because they do what other generations suggest they should be doing. They are successful because they have the right management that give them the ability to express and create and therefore -- succeed.

So where does that leave us? With two different styles, tons of change, and lots of opportunity for disruption. Is this the final changing of the guard? Will speed, quality and reliability ultimately prevail? Is it the passing of the mantle? In terms of technology -- it sure is, but as far as Super Bowl 50 is concerned -- we shall see!