The winner of a $1 million prize honoring excellence in teaching set off shockwaves last year when she said that, given the current climate, she would not encourage people to consider teaching in public schools.

Perhaps that declaration, from veteran teacher Nancie Atwell, shouldn't have come as a shock. Atwell decried the unrelenting focus on standardized tests, which she said reduces teachers to "mere technicians." But she could have cited any number of factors that demoralize many teachers currently in the profession and increasingly dissuade people from considering teaching.

Americans get it. A poll released this week by TeachStrong, a coalition aimed at elevating the teaching profession, found that nearly three-quarters of Americans believe teachers are profoundly undervalued in terms of how they are treated and supported. Respondents were nearly unanimous in their belief that changes and improvements are needed in the way we treat teachers. 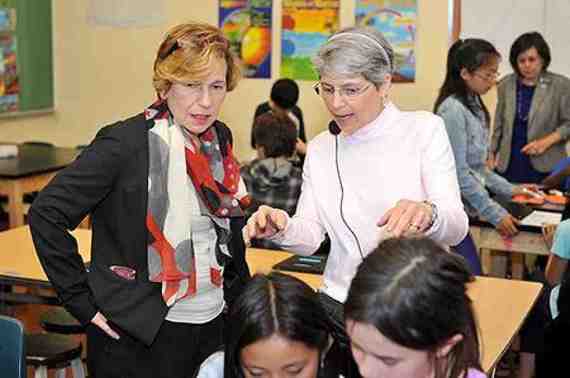 Lawmakers and other authorities should take note, because we are staring down a crisis in the education profession. Enrollment in teacher preparation programs has declined sharply in recent years. And we lose an alarming number of teachers once they enter the profession-- between 40 and 50 percent of new teachers leave within five years. Add to that the loss of mid- and late-career teachers, who have honed their skills but can't see staying until retirement, and you've got a teacher brain-drain unseen in any other profession.

The last 15 years have been marked by top-down education policies that promoted testing over teaching, competition over collaboration, austerity over investment, and scapegoating teachers rather than valuing them. The Every Student Succeeds Act, the new federal education law, moves us in the right direction, but past policies have left their mark.

Teachers are under attack, and so is their latitude to do their jobs. They must fight as hard for the tools and conditions they and their students need as for any increase in salary. Educators routinely spend thousands out of pocket for classroom supplies, and even food and clothing for their students. Yet anti-public education and anti-teacher ideologues have backed lawsuits aiming to strip teachers of tenure and other workplace rights. But Vergara v. California, the case they hoped would do just that--and cascade to other states -- was struck down just days ago in a unanimous decision by a California appeals court.

Teachers are the first to say that, if someone can't teach after they've been prepared and supported, they shouldn't be in our profession. Tenure ensures teachers have a voice and a fair disciplinary process -- not a job for life. It should never be a cloak for incompetence or an excuse for managers not to manage.

And that is essentially what the court in Vergara said: that tenure as a concept does not adversely affect children's education. And while the court recognized the many factors including poverty that affect student learning, it also concluded that administrators have to manage fairly and effectively. The lead attorney who argued the Vergara case said in the wake of the ruling that "the laws at issue in this case shackle school districts and impose severe and irreparable harm on students." But that Orwellian premise -- that stripping teachers of employment rights enhances students' educational rights -- makes no sense and is thankfully continuing to lose support. What really harms students are social inequities that fail to provide disadvantaged children with the programs and services they need. Those who point fingers at teachers without ever lending them a hand seem hell-bent on turning America's teacher shortage into a full-blown crisis.

You cannot fire your way to educational success. A great teaching force has to be nurtured -- and that happens by effectively recruiting, mentoring, evaluating, supporting and retaining teachers.

So what can we do? We often look to high-achieving countries for lessons about how they educate their students. We should also look to them for how they treat their educators. They place a heavy emphasis on teacher preparation, mentoring and collaboration. Their teachers have voice and agency to meet children's needs. Simply put, these countries don't out-test us, but they do out-prepare, out-invest, out-respect and, as a result, outperform the United States.

In this country, studies show that the features distinguishing struggling schools from schools that are improving academically include a focus on collaboration, professional development, and trust among teachers and administrators. Research shows that favorable working conditions predict improved academic growth, even in schools serving low-income, high-minority student populations. And schools with high levels of teacher voice have lower teacher turnover.

Teachers should have the time, tools and trust they need to be most effective. They deserve to work in respectful, supportive environments. And teacher compensation should reflect the importance of their work.

It's well past time that when someone says they are a teacher, the response is "thank you," not "why?"