[How the Venerable Pomnyun Became a Monk] 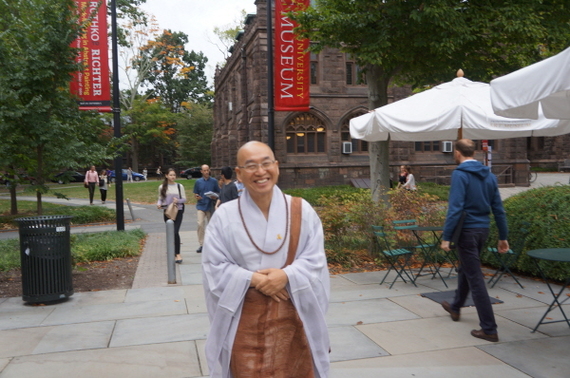 A questioner asked "I have a second question. Why did you become a monk?"
I had no intention of becoming a monk. I wanted to become a scientist, especially an astronomer. When I was in high school, there was a Buddhist temple next to my school. During the time of my final exams, I was walking out of the temple after praying for good grades. A monk stopped me, but I didn't feel like talking to him because every time this monk got a hold of me, he would talk to me for hours. Since I had to take finals the next day, I had no time to spare.

So, I told him, "Sunim [Korean word used to address a Buddhist monk], I'm busy today."

He asked, "Busy? Where did you come from?"

"What about before school?"

"Where were you before you were at home?"

He kept asking the same meaningless questions and I kept answering until eventually I replied, "I came from my mother's womb."

"What about before your mother's womb?"

Then he asked, "Where are you going?"

I replied, "I am going to the library."

"And after the library?"

"What about after that?"

After a series of questions and answers, I replied, "I will be dead."

"Where will you go after you die?" he asked.

Suddenly he bellowed at me, "You stupid boy! Why are you so busy when you don't even know where you came from and where you are going?"

His remark was a big shock to me. So I asked him, why I was so busy and if anyone knew why I was so busy. He answered, "You are supposed to know." I asked him what I should do to find the answer, and he told me to move into the temple. That's how I became a monk. I did not have the slightest aspiration to become a man of religion. I was just curious to find out the truth, be it religious, physical, or mental. That is the reason I am doing the things I do now.