The editorial board of Rupert Murdoch's Wall Street Journal has a simple game. They want to cut taxes for the rich and government services for the rest, and end regulations of banks and the environment. They support taxpayer-financed bailouts of Wall Street when needed. They will twist any facts in the service of these goals.

Today's lead editorial, with its graph of "Obama's Growing Payroll," is a perfect example of how the WSJ misleads rather than informs. The gist of the editorial is that Obama is presiding over a massive increase of government, exemplified by the surge of civilian employees. The graph shows a striking rise of federal employment from around 1.875 million in 2008 to 2.1 million in 2011. (I reproduce this as Figure 1 below).

The Journal neglects the fact that today's 2.1 million workers is actually identical to the number of Federal employees in 1981 at the start of the Reagan Administration, 1989 at the end of the Reagan Administration, and 1993 at the end of the Bush Sr. Administration. The numbers went down slightly after that (by around 200,000-300,000 workers as of the late 1990s) with a decline in Defense Department civilian employees, a decline that was probably offset by the rise of private defense contractors (not included in the OMB tables). There is no long-term trend at all. (I show this as Figure 2 below).

The Journal endlessly tries to portray the "growth of government" as a social welfare system run amok. The editorial implies that President Obama is repeating LBJ's Great Society by building up giant welfare and regulatory programs reflected in the "boom" of federal employment. But where did this so-called "boom" (actually a tiny boomlet) actually appear? In Great Society programs? In entitlements?

No, the increase in employment is mainly in national-security-related employment: the military, homeland security, and justice (including prisons, FBI, drug enforcement, and the like). Welfare and entitlements programs little to do with. If we parse the increase of 225,000 federal jobs between 2008 and 2011, three-fourths came in the Defense Department (+84,000), Homeland Security (+28,000), Justice (+13,000), and Veteran's Affairs (+45,000).

Of course the Journal's entire argument is absurd, a red herring, since the increase of 225,000 jobs represents all of 0.0017 of U.S. non-farm employment of 131 million workers. The entire federal civilian workforce is a mere 1.6 percent of the total non-farm employment. The Journal is taking tiny fluctuations and making them into a federal case, so to speak, for its propagandistic purposes.

The actual fact of relevance is that the federal government has been declining as a share of national non-farm employment, from 2.3 percent in 1981 to 1.6 percent in 2011. (I show this in Figure 3 below). Partly this is because services that government should be providing have instead been outsourced to political cronies (especially among defense and security contractors). Partly its because of the true shrinkage, not expansion, of the federal government's programs relative to GDP in non-security activities such as the environment, job training, community development -- the matters that benefit poor and working class households, who don't, incidentally, read the Wall Street Journal.

The big lie of our time is that the federal government is expanding out of control. Yes, there is undoubted waste, especially in military outlays and in outlays for over-priced private health services. The Journal is a promoter of that variety of waste, the kind that benefits the 1 percent represented by powerful lobbyists, and that hurts the rest of society. For government services that count for the 99 percent, the federal government is shrinking, alas, no matter which phony figures the Wall Street Journal throws our way. 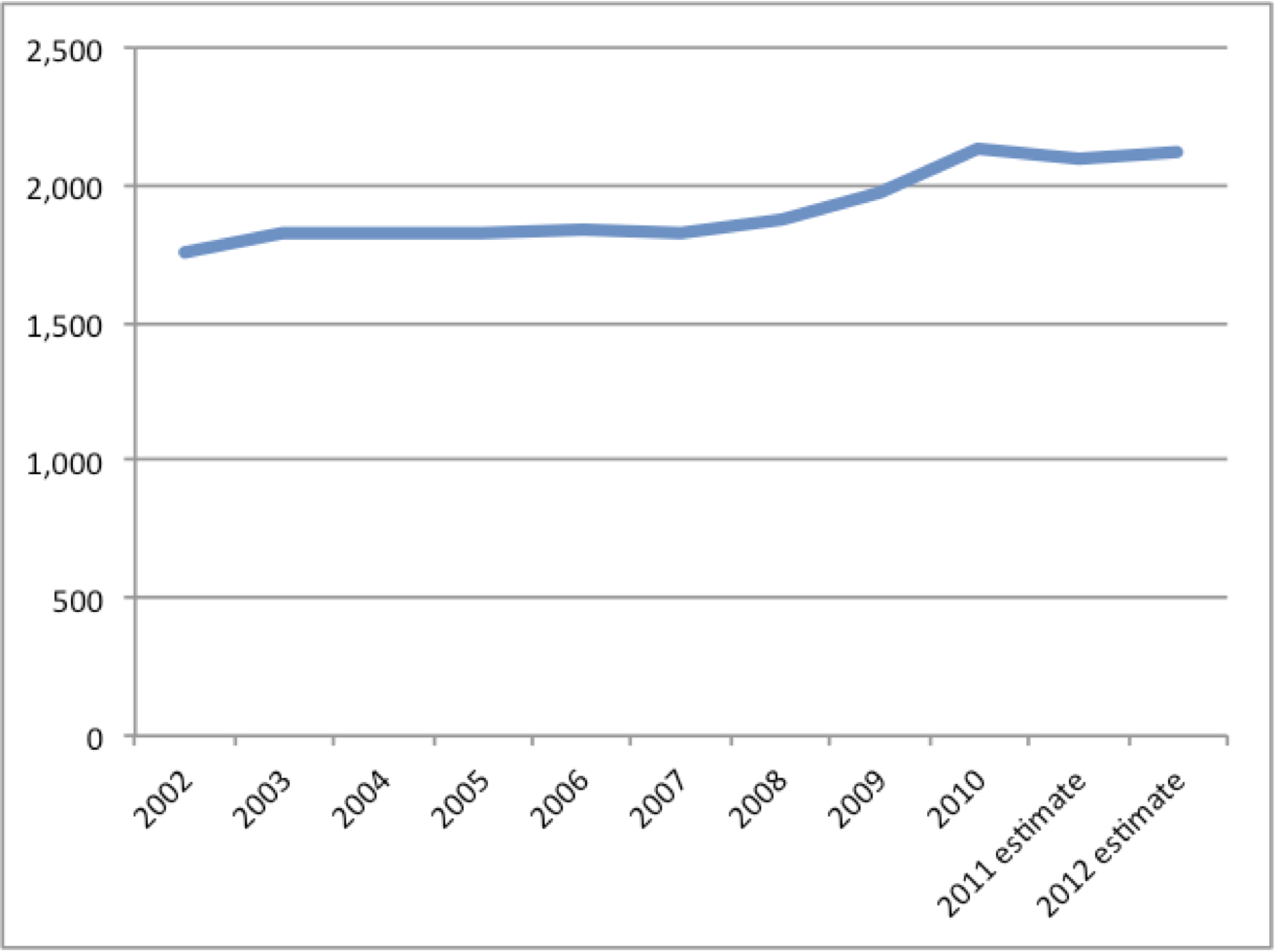 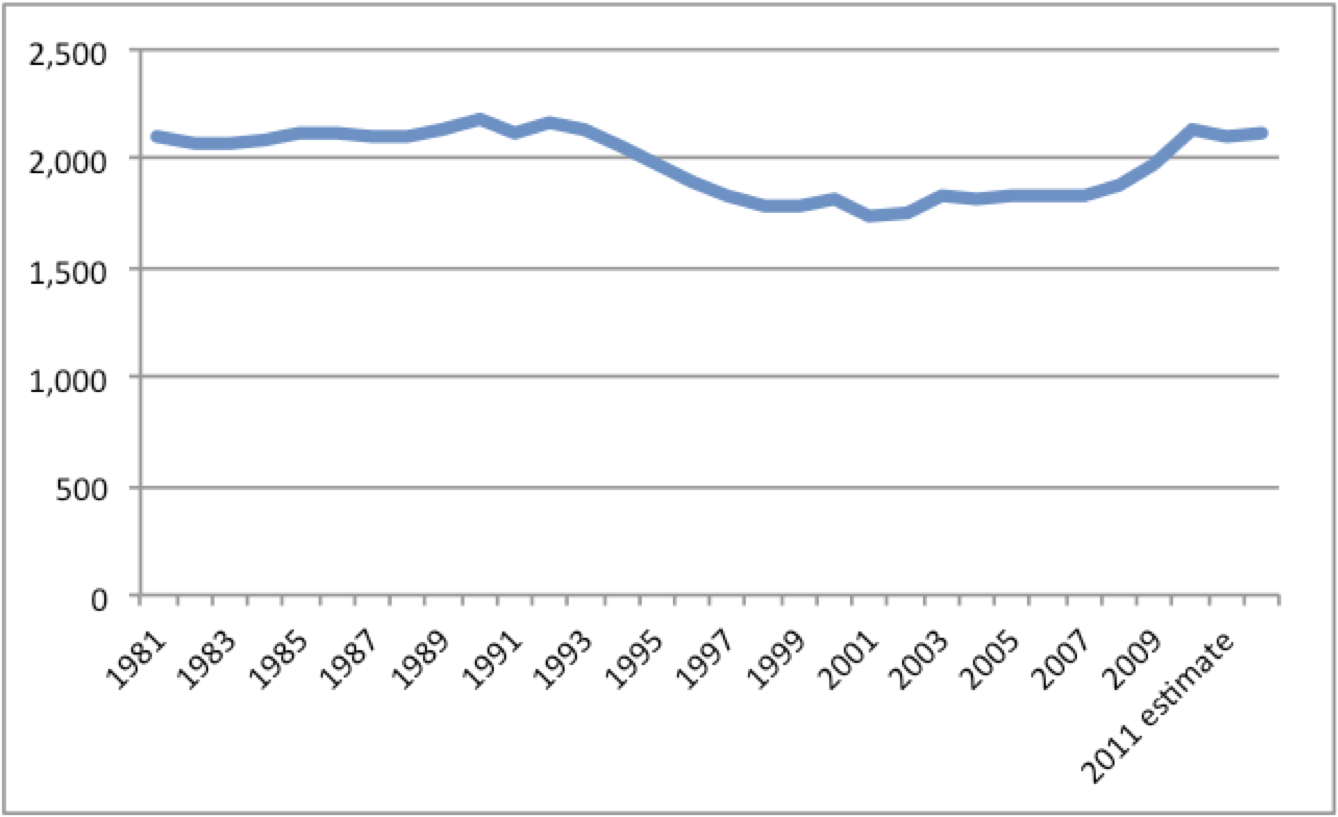 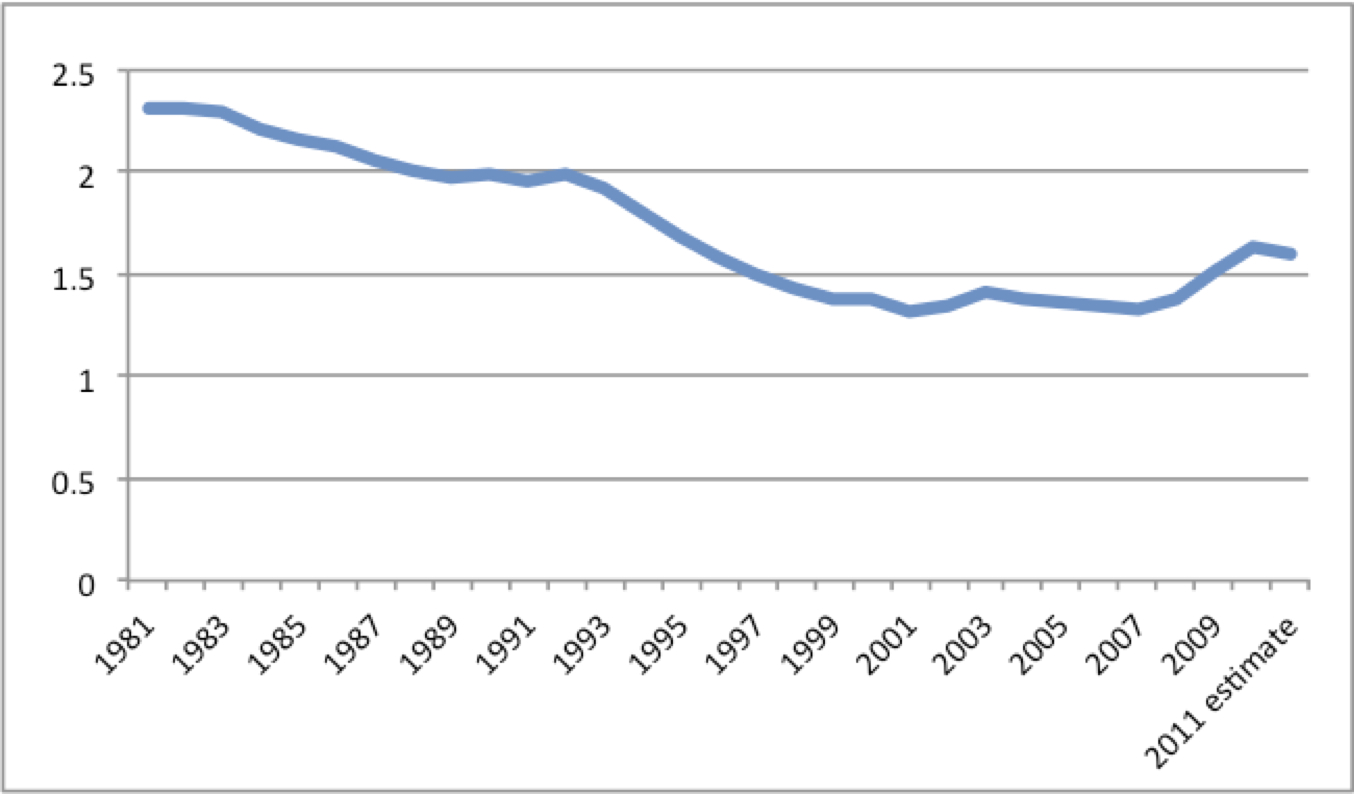 Figure 3. Federal Employment as a Percent of Non-Farm Employment,
Source: OMB and Bureau of Labor Statistics