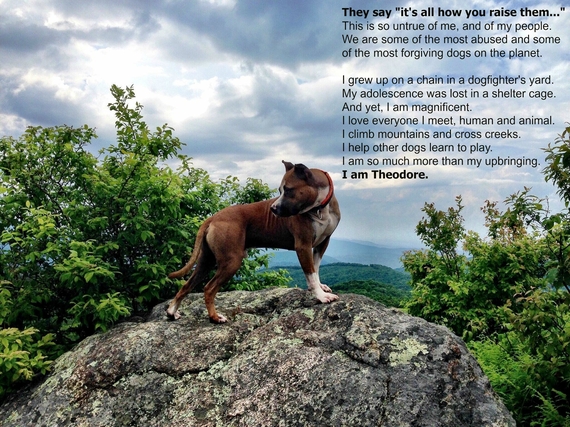 It happened again last week, in line at the bank.

"Thanks, this is Theodore. He's friendly, you can pet him."

(Petting him as he wiggles and wags and leans into her.) "He's so beautiful -- is he a Boxer mix?"

Now I'm uncomfortable. She means this as a compliment -- I'm a middle-aged woman with a pocket full of dog treats, and my dog is obedient and friendly. Obviously, I'm the reason Theodore is so wonderful. 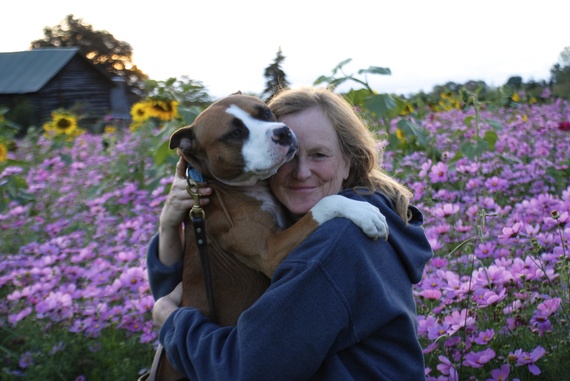 But she's wrong. I didn't raise him. Theodore was seized two years ago, during this country's second-largest dogfighting bust. He grew up in a dogfighter's yard, raised by a man who chained six week old puppies to barrels. Rescued as an adolescent, Theodore spent eight more months at the ASPCA's emergency shelter waiting for legal wheels to turn. I met him while working there as a consultant. 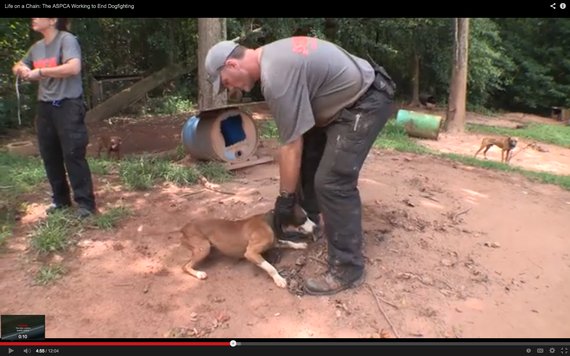 Still from the ASPCA's (hard to watch) video, Life on a Chain

When working with the victims of dogfighting, trainers and behaviorists try hard to keep social animals dog-friendly, to help fearful dogs learn that the world is safe now, and to help dogs exchange inappropriate, aggressive or overaroused behavior for better skills.

Theodore was a natural helper. He partied with the playful dogs, became small and non-threatening with the shy ones, and instinctively knew how to defuse aggression with the more difficult ones. And, like most of the gamebred dogs I've met, he was waggy and friendly with people as well. I was smitten. My friend Amy told me, "This dog needs to belong to a trainer."

As the case concluded and dogs started leaving the shelter, I called an amazing rescue group in NYC, Bully Project, and raved about wonderful Theodore. Early one morning, I loaded him, with a box of favorite toys and a new collar, on a transport to New York. 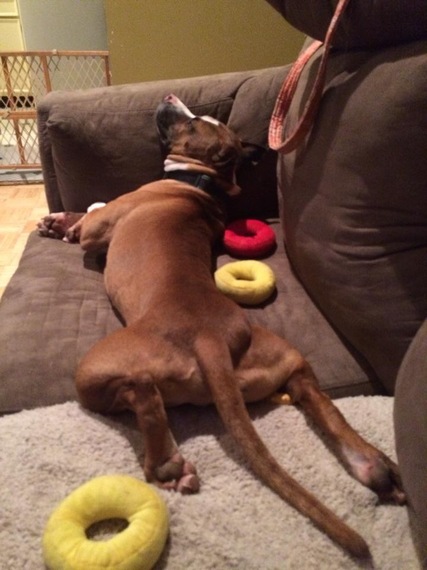 You know how this ends. My husband Barry and I drove up and adopted this happy little meatball, and Theodore has been with us (or perhaps we have been his staff) for more than a year now. 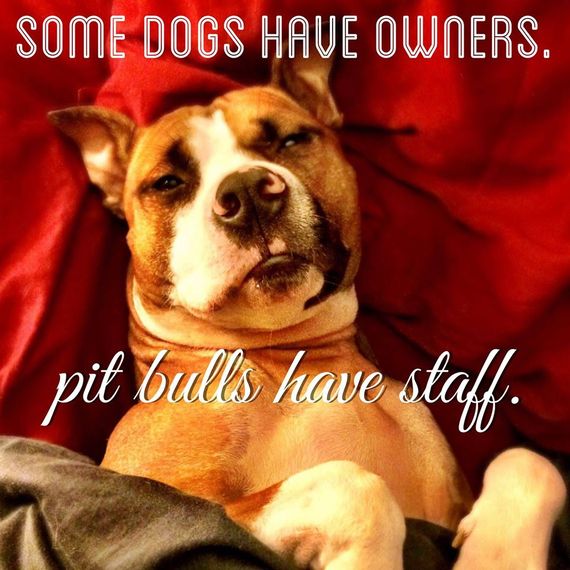 Theodore amazes us. He loves everyone -- humans, dogs, horses, and even cats. He is confident in the city, on trails, and (once he got over chewing seatbelts) rides in the car like a pro. He loves hikes, and is obedient off leash.

This little fight bust dog is incredibly smart, busy and full of mischief and probably too energetic for a lot of households. He is also perpetually happy, charming, clownish, and creative. No dog has ever made me laugh as often or as hard as Theodore does. His antics keep an army of Facebook friends laughing every day, too. 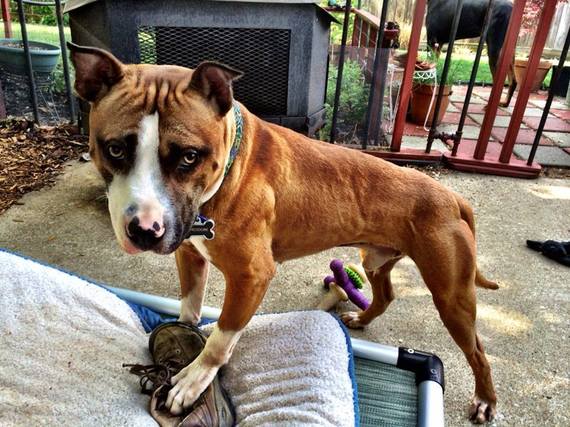 Theodore helps me tremendously in my animal behavior business -- his fluency in dog language astonishes me.

Ask any behaviorist what's more important -- nature or nurture -- and they'll answer "both." Some dogs can be raised by the book, socialized to everything, and still become dangerously aggressive.

And others, like Theodore, can come from a background designed to create frustration and dog aggression, and their natural resilience and joy can win over. 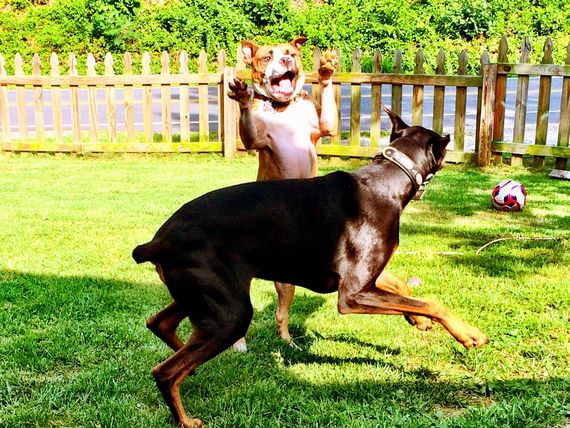 Theodore and his Doberman brother, Duncan

So please, pit bull lovers, stop saying "it's all how they're raised." I know you mean well. But if you truly believe your words, no fight bust dog would ever be able to be adopted. And just look at the success of Michael Vick's former fighting dogs.

If you truly believe "it's all how they're raised," no stray shelter dog or abused dog would be safe to place in a home. I've worked with many animal victims of abuse -- some have issues, it's true -- but many of them are just as resilient as Theodore.

Occasionally, an idyllic puppyhood still results in a dangerously aggressive adult dog. I've met those, too. And most dogs fall somewhere in between these extremes. Environment counts, but so do genes. Ultimately, all dogs are individuals, and that's where we need to meet them. 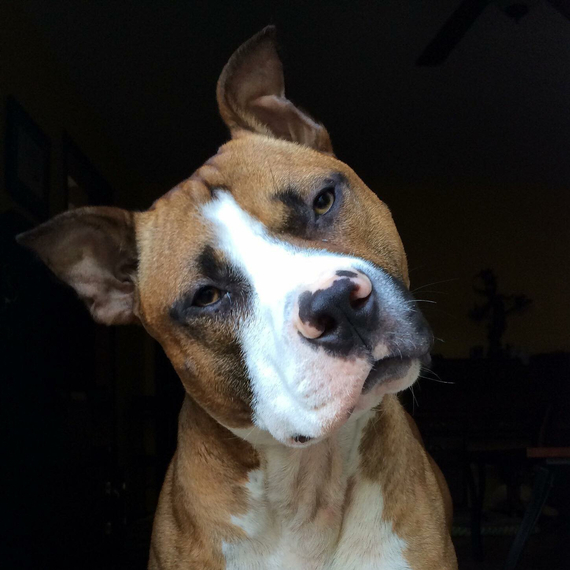 Most of us know that pit bulls, especially fighting-bred ones, are still some of the most abused dogs on this planet. But Theodore and I know that they can also be some of the most forgiving. I am so glad that at least some victims of dogfighting are given a chance at life as a pet dog now.

I'm still not sure how I should answer the nice lady at the bank though. "He was raised by a dogfighter," I say, as Theodore marches up to accept his cookie from his favorite teller. 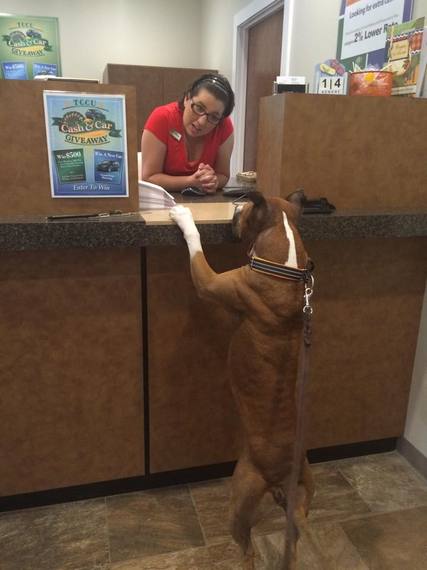