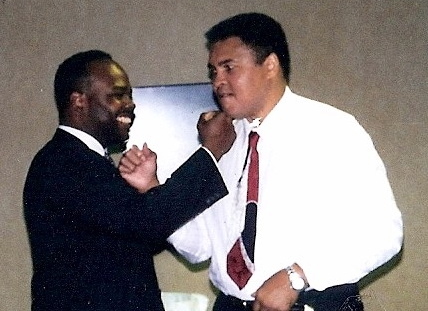 John Fountain poses with Muhammad Ali, a childhood hero,
during a chance encounter.

In a treasured photograph, I stand smiling widely next to the champ, my brown fist to his face, his to mine.

I wear a dark suit. The champ wears a white shirt, striped tie and his signature lip-biting glare. Meeting him years ago, he seemed just a little less larger in life than the man I had idolized as a child--than the champ whose velvet poster once hung on my bedroom wall.

"Float like a butterfly, sting like a bee, the people's champion, Muhammad Ali," declared the poster that glowed in the dark.

The idea of meeting the former boxing heavyweight champ of the world--my sports hero, before I was smitten with Dr. J and Ernie Banks--
made me almost giddy

I was a reporter at the Washington Post during the mid-1990's when I got word Muhammad Ali was going to be visiting the courthouse in Fairfax County, Virginia. I hurried over from my office.

I am not the starry-eyed type, not one to be suddenly overcome by stomach butterflies in the presence of celebrity. As a reporter, I have been in the company of royalty, of heads of state and assorted big wigs.

But the idea of meeting the former boxing heavyweight champ of the world--my sports hero, before I was smitten with Dr. J and Ernie Banks--made me almost giddy.

As a child, I idolized Ali. It wasn't that I wanted to become a boxer, though mimicking the champ's quick-footed style and jab could go a long way when it came to slap boxing with the fellas.

In the hood, back in the late 1960's and early seventies, the image of Ali loomed larger than life: his flashy smile, his trash talking and bravado, his sure-footedness--a black man who embraced his race with the heart of a champion, and as someone who saw himself as part of "our" struggle. He was one of us. That was always clear.

And yet, the grace with which he floated across the ring--choreographed the Ali Shuffle--predicted the round in which he would defeat his opponent paled in comparison to all that he embodied for me as a ghetto black boy.

Aware even back then of his story of being stripped of his title and his refusal to fight in the Vietnam War, of his outspokenness and his chorus of detractors and haters, I always saw so much more at stake than a title belt when Ali climbed into the ring--even against another black man--like in 1971.

I was in the 5th grade when Ali first fought Smokin' Joe Frazier for the title. My friend Christopher picked Frazier. I had Ali. When I learned Ali had lost, I cried.

It is a hard thing to explain--or maybe not. How one athlete can embody so much hope, transcend sports. How an athlete-hero can touch the heart of a little boy--who does not yet know what he wants to grow up to be--and yet inspire him to want to be the best at whatever that turns out to be.

This much is also clear to me after all these years: That the real test of an athlete's mettle is what he represents off the court, off the field, beyond the ring. That is the true heart of a champion, the heart of a man.

And yet, that is especially difficult to decipher in a day when professional athletes appear to be more like carefully marketed media creations, in a world where a new breed of millionaire, bratty superstars thump their chests or dance in the end zone, displaying a semblance of Ali's flash but too often none of his class.

Many years after his glory days, Ali gracefully posed for a picture with a childhood admirer, standing less flashy than in his younger years, but still--forever--glistening like the champ he is.