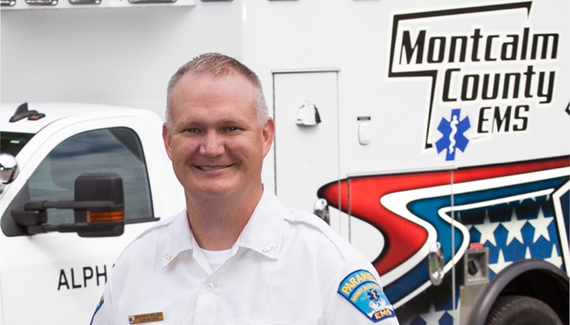 Brandon Mulnix, a rural paramedic supervisor, recently did something impossible - and so can you! But first, a little background.

One of the biggest issues I see holding businesses - as well as individuals - back on a regular basis is the amount of valuable time and resources it takes to solve a big, seemingly impossible problem. Having helped leaders from some of the largest organizations rapidly solve what they thought were impossible problems, I can assure you that big problems are almost always incorrectly identified, and the time we spend trying to solve the wrong problem is nothing more than a costly distraction preventing us from finding the solution.

I have been teaching the "Skip It" principle to leaders of organizations all over the world. There are several different ways to skip a problem so that you can move forward faster, but the one I want to highlight in this article centers around the following insight: The problem you think you need to solve is the wrong one to focus on. Once you skip the perceived problem, you can get to the real problem, and the solution shifts from being invisible to being clearly visible.

For example, after the Japanese bombed Pearl Harbor, U.S. leaders knew that to win the war, they would eventually have to invade Japan. The big problem was that there were hundreds of islands that were occupied by the Japanese between Hawaii and Japan. The initial plan made perfect sense: The U.S. would have to recapture all of the islands as it worked its way to Japan, and that would not only take a lot of time and resources, it would cost millions of lives on both sides. That is, until someone had what I refer to as a "Flash of Foresight." Why not skip the part of the plan that called for recapturing all of the occupied islands, and only recapture the ones that were on a direct path to Japan?

By leaping over this distraction, you are peeling back the onion to identify the deeper issue that is preventing you from moving forward. I was recently contacted by a supervisor of paramedics, who read my book Flash Foresight and is now using this principle to help people in a new and powerful way.

The impossible problems he faced with working in rural emergency medical care were speed and distance. Brandon Mulnix needed to find a way to speed up response times and get to a person having a medical emergency far faster. Ultimately, this was a physical problem that could not be solved unless he could invent a teleportation device.

Understanding that it's impossible to get a paramedic on the scene within a few minutes in a remote or rural location forced him to look for ways to skip the problems of speed and distance entirely. Brandon remembered that in my book Flash Foresight, I described the "Skip It" principle and how to use it. He remembered reading that in order to skip the perceived problem and find the real problem, you need to peel the problem back, like peeling an onion, to get to its core, and a great way to peel back the problem is by asking "why" a number of times.

So Brandon asked himself: Why do we need to get there faster? His answer was that when his paramedics arrive on site, it takes them time to gather the information they need about the patient before treating him or her. And the sooner you can start helping a patient - applying pressure to a bleeding wound, tilting the head back to open an airway - the better the outcome. It was at this moment that he discovered a question that would change everything: What's stopping the 911 operator from transferring the call directly to his paramedics' cell phones as they start to head to the patient's location? The answer, of course, was nothing!

As soon as Brandon explained his solution to his fellow workers and his supervisor, they all said, "That's so simple; why didn't we think of this sooner?" The answer, of course, is that everyone was trying to solve the wrong problem.

Many organizations will immediately go straight into fix-it mode or look into technological solutions without understanding the real issue. By leaping over the perceived problem, Brandon found an ingenious new way to utilize existing technology.

With nothing but cell phones, something that everyone has today, Brandon was able to provide immediate benefit to patients. Being up to 25 minutes away, but having the ability to gather crucial information and provide critical advice to anyone near the patient before his team arrived on the scene could even save lives.

A relatively small change instantly provided tremendous peace of mind to the patients who knew the paramedics were armed with all of the vital information before they arrived. We often talk about problems caused by legacy technology, but it's legacy thinking that clouds our judgment.

By trying to solve the wrong problem, Brandon and his team couldn't see that the solution to the real issue was in their pockets all along. The Flash Foresight that enabled Brandon to implement lifesaving changes was only made possible because he followed the "Skip It" principle. As a supervisor of paramedics, Brandon looked beyond response times, dispatchers and technology to discover where the real pain point was.

This inspirational story illustrates how we can all make an even bigger difference by realizing that nothing is impossible when you can identify the real problem. It also proves that technology is bringing the global community closer together. The words that we write on a blog post, forum or website can help others solve their problems regardless of any geographical barriers.

I believe that legacy systems aren't the problem; legacy thinking is. Our future success hinges on having the ability to see the invisible so that we can do the impossible. Brandon's story proves what can be achieved by thinking differently and realizing that the problem you think you have is not the real problem. When you find the real problem, the solution begins to appear.

What is your biggest problem? Identify it, then "Skip It!"