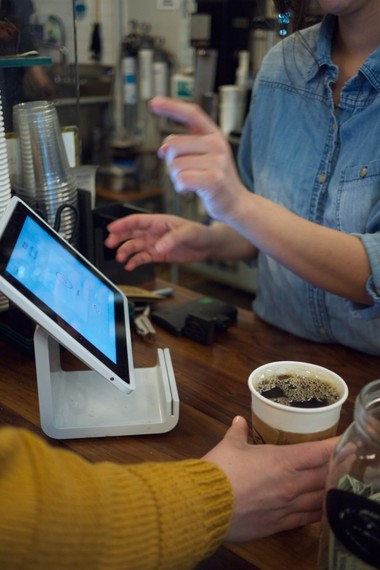 Your smartphone has staged a coup on your social life, invaded your mealtimes, and probably gobbles up more of your free time than your best friend (unless her name is Siri).

And now it's changing how much you tip -- and you may not even be aware of it. Mobile-phone apps, Square, the new Starbucks digital-tipping service, and similar 21st-century doohickeys are beginning to render our wallets superfluous, and the digital age is establishing new standards for how much gratuities for eating out should be.

Pena, whose restaurant uses Square, has seen tips increase noticeably in the past couple of years, and said it's more than the expected tip creep that's associated with generally rising prices. At Molly Moon's Ice Cream in Seattle, owner Molly Moon Neitzel said that her scoopers went from making about $8 an hour in tips to $12 an hour since her stores embraced digital tipping. Adam Mesnick, owner of the Deli Board in San Francisco, said tips used to make up from 5 to 10 percent of total daily sales. Now? Tips range from 7 to 16 percent of sales.

For Pena, the explanation is that the act of tipping has become a lot more abstract: Even the stingiest customer doesn't feel quite the same punch in the wallet when he scribbles a couple of numbers onto an iPad instead of counting out and handing over a wad of cash.

"I think there's some kind of a casino effect," he said. "You don't comprehend that it's real money."

But credit cards have been around a long time, so the increases can't be explained merely by the fact that the U.S. is transitioning to a cashless society.

It's all about what's really valuable to people who eat out, said Mark Egerman. He's a co-founder of Cover, a service that could be described as the restaurant version of the taxicab app Uber -- Cover users who go to one of the hundreds of Cover-affiliated restaurants in New York City don't even have to wait for a check when they're done eating -- the bill (and the tip) are taken care of through their Cover account via their smartphone app. The average New York City diner tips 18.8 percent, but the average Cover user tips 21.7 percent. Though he acknowledges that his clients are a self-selecting group that makes more money than the average New Yorker, Egerman is convinced digital services like his are primarily making people tip more because of simple psychology.

"Tipping down is rare," he said. "But the No. 1 reason people do tip down is waiting for the check. One of the reasons for that is that waiters spend too much time swiping cards. By removing that, waiters spend more time with guests."

And pampered guests are happier guests, and happier guests are bigger tippers. So in a sense, customers who use apps or digital tipping services are tipping more because they're willing to shell out a couple extra bucks for something more precious to them: their time.

When the Big Apple's taxis began adopting credit-card readers, many lifelong New Yorkers were shocked to discover that they'd apparently been undertipping their cabbies for years--at the checkout screen, they were presented with their tip choices, with 20 percent being the smallest option. (A small, easily missed button in the corner allows riders to enter other amounts.) Of course, they hadn't really been undertipping before, but thanks to the way the screens were laid out, 20 percent became the new norm overnight. It's a strategy known as anchoring, subtly or not so subtly establishing a new standard by shifting the choices you present. If you want Team Big Tippers to score more touchdowns, you're going to help them immensely by moving the 50-yard line toward the goal.

The same goes for most digital-payment services that include a tipping option. Most offer restaurateurs and shop owners the choice of letting customers tip by percentage or flat-dollar amount, or whether to switch from flat dollars to a percentage-based tip if the total bill comes to, say, $10 or more. Some allow them to set the default percentage as the tip -- customers can adjust the percentage at checkout. Unsurprisingly, most customers pay the default. Cover's standard default, for example, is 20 percent. Square customers have a feature called Smart Tips that allows customers to either leave no tip or one of three tip percentages on bills of $10 or more -- the lowest percentage is 15 percent, the highest 25 percent. Clearly, the implication is that the "generous" 15 percent tip your dad used to give is no longer considered quite so generous.

Even something as seemingly mundane as deciding to have a two-part payment screen with a tip screen that comes before the signature screen, instead of a single screen with both, can make a tremendous difference. Neitzel found that out when a glitch in the Square service turned her two-screen payment into a one-screen for a few hours one day.

"The employees noticed immediately that they were making way less tips," she said.

That extra line asking whether you want to leave a tip makes a big difference to how much a server takes home at the end of the shift, it turns out. Now, when it comes to baristas, ice-cream scoopers, and sandwich-shop counter guys, tipping is no longer just an afterthought. Customers have to consciously click "no tip" before completing their transaction.

SEE MORE: 22 Recipes Everyone Should Know How to Cook

"I wouldn't use the term 'tip-shaming,'" Neitzel said. "I would say, as a citizen of the world, every decision we make that impacts other people should be made with consciousness. If you do not tip someone for a tip they provided, it should be a conscious choice, not one a machine makes for you."

Both restaurateurs and digital-payment providers said people shouldn't get the impression they're designing their products to favor servers or fleece money out of customers. Instead, it's about giving customers more flexibility when it comes to gratuities.

For example, the Starbucks digital-tipping app offers four options: no tip, 50 cents, $1, and $2. When the average coffeeshop customer makes small purchases but is increasingly likely to pay for them with a credit card, leaving any tip at all can prove a hassle. Digital tipping solves that problem.

"No more, 'How do I tip my barista without going to an ATM to get cash?'" said Starbucks spokeswoman Linda Mills.

And Egerman said companies like his are well aware that you're not going win over many customers if you sap all the fun from going out.

"We considered adding a feature where the tip screen could say, 'You just chose to tip 16 percent. In New York City, the average is 18 percent.'" he said. "But we decided the last thing people want on a night out is their phone shaming them."

Still, some servers aren't convinced that they're really sharing in the bounty of the digital age at all.

"I think people are tipping probably more precisely because there are so many apps out there to figure out what your tip is, but I haven't seen a big change," said Darren Cardosa, a New York waiter who blogs under the alias The Bitchy Waiter. "I think it's a wash -- people are rounding up or rounding down. And I don't know many waiters who appreciate Groupon groups or those social-media deals."

But Chase McCown, who writes about his Los Angeles restaurant travails on his Bitter Waiter blog, said he's happy that his tips will soon be coming to him in the form of abstract ones and zeros instead of cold, hard cash -- with one caveat.

"I'd just tell people to keep taking into account service that went above and beyond," he said.