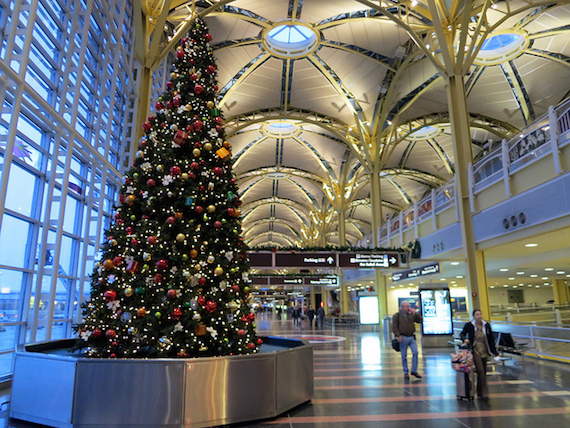 Cramped airplane cabins, weather delays, slow security lines - traveling during the holidays is inevitably hassle-prone. From determining how to get your gifts from point A to B to navigating unexpected disruptions to squeezing carry-ons into crowded overhead bins, holiday travel creates plenty of stressful scenarios. But hang in there: With guidance from travel experts, we've come up with clever techniques to mitigate frustrations and make the journey a little more enjoyable this season.

Prepare for the Unexpected by Arriving Early

No matter where you're headed, your best bet for reaching your final destination is getting to the airport well in advance, says Christopher Elliott, a consumer advocate and journalist. Last year, Airlines for America, an industry group that represents major U.S. airlines, forecasted 24.6 million travelers to fly the friendly skies around Thanksgiving, up by 1.5 percent from the previous year. And this year shows no signs of less traffic at major domestic hubs. "The best present you can give yourself, for peace of mind, is more time. An extra hour to get to the airport, to get through security," he says.

George Hobica, founder of Airfarewatchdog.com, recommends arriving at least two hours in advance. Between travel accidents, slow-moving lines, technological glitches and security threats, it's best to account for extra variables during the busy travel period and adjust your plans accordingly, he says.

The flight itself may be less expensive, but you'll put yourself at risk of being disrupted by weather or other delays by choosing a connecting flight, says Colleen Clark, managing editor of Jetsetter. "If you think about it, that extra 40 or 50 bucks can be the difference of seeing your family and friends for Thanksgiving or not," she adds. And because flights are so full, she cautions that if you miss your connecting flight, you'll be hard-pressed to catch the next flight and might even end up paying more to get rebooked on a new one.

Another major selling point of booking a direct flight: "It's just one less step that your bag can get lost," Clark adds. She also advises booking the first flight of the day available on your preferred carrier to mitigate the chances of your plane being delayed.

If You Have a Connection, Avoid Disruption-Prone Airports

Rather than putting your travel plans at risk by flying through hubs that are notoriously affected by severe weather, Hobica suggests choosing airports that are less susceptible to inclement weather conditions. For example, if you're planning to catch a connecting flight, travel through a warm-weather hub such as Phoenix or Houston rather than Minneapolis or Chicago, where flights are consistently delayed due to snowy conditions, he says. Though you may tack on a few extra hours by passing through a warmer locale, you'll minimize your odds of being indefinitely stalled due to unforeseen weather delays in cold-weather destinations. Also, plan ahead by giving yourself extra time between flights and having a backup plan, regardless of whether you have a non-refundable fare, he says.

"Get on a flight that's going to minimize your odds of having a problem," advises Jeff Klee, CEO of CheapAir.com. He also recommends skipping cold-weather hubs for connections.

"Don't discount the dangers of unexpected expenses," cautions Clark, pointing to extras like Wi-Fi access, carry-ons and other ancillary fees. She also highlights the importance of doing your homework to understand which carriers are going to be your best bets for scoring a deal and rebooking your flight in the event your flight is canceled. And if your flight is impacted by weather delays, and you haven't been booked on another flight, she suggests heading to the gate as if you're flight was leaving. "If it is indeed canceled, you'll be the first in line for rebooking," she says, highlighting that if you are delayed for reasons such as weather or mechanical issues, the airline is only obligated to put you on the next available flight. Because flights are so full during the holidays, it can be tricky securing a seat, she says.

Stay With Your Suitcase

If you have the choice, keep your bag in your possession, Clark advises. And if that's not a viable option for you, forgo a short layover and prep your bag ahead of time with a colorful identifier such as a brightly colored scarf, she says. That way, you'll prevent your bag from getting lost in the shuffle when being transferred. You should also take a photo of your suitcase, so in the event it gets lost, you have a record. Another tip: "As soon as the attendant prints your luggage tag, make sure it's correct," Clark says.

If you're clamoring for a comfortable premium-class seat during the peak holiday season rush, you might be out of luck. "The reality is that economy seats are getting smaller," Klee says. "There's no real silver bullet solution to avoid that."

But nevertheless, it's important to be selective since "all seats and all flights are not all created equal," Hobica says. For example, if you want to be seated next to your travel companion, up your chances by booking your flight now while you can still be selective, he explains.

It's also important to consider the airline's available amenities, such as in-flight video streaming, Wi-Fi access and meal options , he says. That way, if you are in fact stranded on a tarmac, you'll at least have free entertainment, he adds. He also advises bringing along water and something to eat to stay hydrated and prepare for delays.

See: 6 Hacks for Scoring Seat and Room Upgrades Over the Holidays

When it comes to flying with gifts in tow, your best bet is packaging presents after your flight. "The TSA doesn't like wrapped presents," Elliott explains. It's tricky, because there's no hard-and-fast rule for carrying gifts through security or checking gifts, Clark says. And while the TSA does caution that its officers try their best not to damage gift packaging upon inspection, "they're not guaranteeing that they're not going to get opened," Clark says. And if you're carrying heavy presents, keep in mind that you could be slapped with and extra $100 for overweight baggage fees, she adds.

Travel on Thanksgiving and Christmas Day

It might seem counterintuitive, but flying on the holidays will yield fewer crowds and cheaper airfare. You can score up to a $100 or more in savings by opting to fly on Christmas Day rather than the day before or after, Clark says. Plus, crew members are in good spirits, she adds

And according to Elliott, traveling during the holidays is much better since demand decreases. Rather than going with the crowds, he says, "zig when everyone else zags."

Before you head for the airport, download your airline's app to stay abreast of a schedule or gate change to ensure a smoother journey, Klee advises. And if you're planning to hit the road over the holidays, make the most of navigation tools such as Waze, Clark suggests. "It can update you on quirky ways of getting places and alerts you of accidents," she says. And if you're toying with the idea of renting a car from the airport, Hobica suggests opting for Uber over renting a new set of wheels to cut unnecessary expenses.