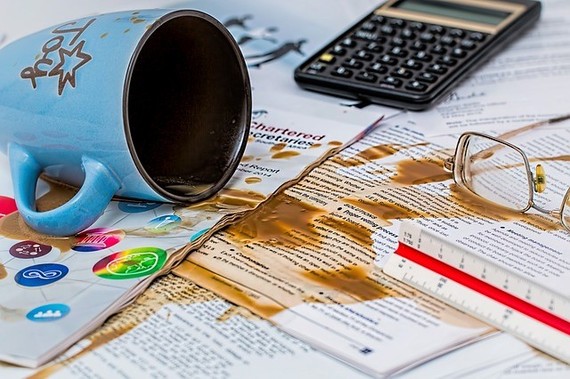 Accidents happen at the work place each and every single day. Sadly, some of those are fatal.

Luckily, most workplace accidents can be avoided. Here are several scenarios and ways to prevent them.

Case Study #1: The Boss The number one danger to the workplace is that one big boss man who is on your hide for everything.

When your boss doesn't respect you (and has no trouble showing it), they treat you like dirt. Nobody deserves to be treated like dirt, or be taken advantage of by having too much work shoved on them.

I'm talking about those times you were demanded (not asked, demanded) to take on more work. Your boss may even be violent towards you - or tries to control the things you say, and manage the way you perform your daily duty.

They might even feel you up inappropriately - if it hasn't happened already. Or flirted with you in ways you didn't want them to.

This is not only cause for losing their jobs, but can lead to serious mental and psychological damage. Case Study #2: Emergency Drills

Emergency drills are what you should know very well so as to know how to safely handle an emergency. It might be a nuisance, practicing and practicing. Just like with copy writing, the more you practice, the more you sell.

Let's say there's a fire, and nobody knows the proper way to evade the flames while remaining calm. Panic sets in. People start sweating. An employee is going into a heart-attack because she thinks she's going to die (you didn't know she was prone to those).

Three people died because they cramped each other together in the break room. This happened 7 years ago, in the building across from my home - it used to be an adult education school. Now it's a government building.

Fire drills could have saved those lives. Case Study #3: Woopsy-Daisy!

Suggesting things like improving lighting, encouraging workers to wear slip-resistant shoes - it's your employers' responsibilities... Would prevent people from being sent to the ER and being tagged with an expensive bill.

Review your contract sometime - or, check it out with a local lawyer. Review the Work Act online sometime.

According to the NFPA, there were over a million fires in the U.S. last year.

These dangers beasts of fires happen because of faulty wiring in homes (or appliance failure). A lot of people lose their homes for a different reason: carelessness.

Homeowners never think twice about overloading electrical outlets or extension cords. Appliances should always (ALWAYS) be plugged into an outlet - never an extension cord, for a period of time.

Appliances with worn or frayed cords can start fires on combustible materials like floors, curtains, and rugs.

Basic electrical safety tips include (but are not limited to): choosing the right equipment, limits (don't put a 100-watt bulb into a 60-watt socket, etc.), not overloading sockets, and replacing damaged sections of cables.

Three weeks ago, my girlfriend could have lost her brother. He and his friends were asleep at some house - it was 2 in the afternoon. They had a fun night of partying, and were all passed out - except for one person.

This one person saved the lives of 7 people, including my girlfriend's younger brother. He was sleeping in the basement - this one person who wasn't passed out saw that a fire was happening, and bolted faster than lightning to wake everyone up before the smoke hit them.

Accidents can happen anytime on the job! Workloads become too much, your stimuli is off the charts and you're taking on more than you can handle.

Your supervisor asks you to do something you're not entirely familiar with. But you need the money, and want to look good in his/her eyes, and go ahead.

It is your right within the workplace, as an employee, to ask supervisors about the risks and dangers of tasks within the workplace. One of the top ways to avoid workplace accidents is to be alert when you're doing a task you're not entirely familiar with. The same thing goes for taking tasks and jobs you have very little training for.

Confined spaces are the worst. I personally can't stand my own bedroom sometimes; I just need to BE FREE.

Thankfully, I've never worked in a cubicle. A lot of my closest friends do, and the horror stories I could tell you...

One of the main things they bring up again, and again about confined spaces is this: Horribly-ventilated rooms, drains, sewers, trenches, pits, tanks, silos, and chambers are prime time "hot spots" for welding, painting, and flame-cutting accidents.

This is why people who are specifically trained to deal with confined-space situations are vital to the safety of not just you and the ones you care about, but themselves as well.

What else happens? Oxygen deprivation. Fumes. Vapor. Liquids and solids releasing gases into the air when they're shaken up and disturbed.

Simple, right? Sometimes it isn't as white and black as that. But ask yourself this "do I have to absolutely go in there?"

If you have to think twice about it, the answer's already no.

Similar to aerial lifts carrying too much weight; accidents happen, despite the best intentions. Say "NO" to things that are certain to cause accidents. Say "NO" to over-weight, high-speed, without-safety-equipment.

Your "NO" can save your and/or someone else's life. Importantly, get trained and certified for such situations.

Right. How couldn't you. Seems like this sign is everywhere. Because it is. For good reason. There are four bio-hazard levels:

BSL-1 - a biological agent that does not cause disease in healthy humans. Although it can cause illness in people with immune systems that aren't up to par. Wearing gloves and a face mask are often enough of a safety precaution.

BSL-2 is for agents that aren't transmittable by breathing, but most of the population is infected with already. It causes diseases in healthy humans, and is transferable through direct contact with infected areas/people/surfaces (by ingestion, cuts, etc.).

Agents like HIV, hepatitis B, and salmonella. Autoclaves must be present (these sterilize instruments). Not touching people when you have an open wound is a safe precaution. There are two other more serious levels (such as BSL-4, the level assigned to pathogens that cause high fatality rates and have no effective treatments or vaccines) ... but you most likely won't be handling those in your workplace.

Unless your workplace is a bio-hazard laboratory. In which case...good for you.

In this day and age, taking precautions for your safety and the safety of your colleagues and co-workers, is all about common sense. Use these precautions to keep your workplace safe today, tomorrow, and the future.