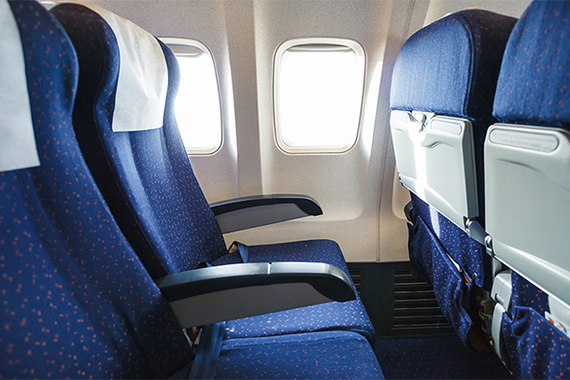 Everyone agrees that legroom is a huge deal. But it's not the only way that airplane seats come up short. Some won't recline. Others are constantly bombarded with the scent of the airplane lavatory. Point is, there are many ways your seat can disappoint.

Fortunately, you can avoid most of these seats most of the time just by learning which ones to avoid when making your seat selection. Here are the seats you should work hard to avoid every time you travel.

The Seat with the Entertainment Box

You've arrived at your seat and you're going through the process of deciding which items to put in the overhead bin (if you're lucky enough to find room in the overhead bin) and which to stow under the seat in front of you. And that's when you look down and realize it's going to be an easy decision—because there is no room to stash your stuff (or stretch your legs) under the seat in front of you. Instead, there's a metal case, an "entertainment equipment box," taking up the entire under-seat storage area. You only have to make this seat mistake once to know those few extra inches of storage and stretching space make a huge difference.

RELATED: 6 Ways to Get the Best Coach Seats on an Airplane

The Seat At the Back of Any Section

Seats at the back of a section—those usually found just in front of a bank of lavatories or a galley—are the absolute best if you refuse to recline on principle, truly can't stand having your seat kicked by the person in back of you, or if you're simply an aficionado of discomfort. For the rest of us, these seats should be avoided whenever possible.

The Seat Next to the Main Exit Door

If legroom is your only consideration, then this might be the seat for you. But if you're an average-height person, you may want to question the common wisdom that the seats next to the main exit door are prime real estate. Why? You'll be giving up your arm's-reach stowage (no seat in front of you means no under-seat storage, so you'll need to put everything in the overhead bins during take-off and landing). You'll also come up against‐literally—the reduced seat width that comes with the solid metal armrests needed to stow tray tables. And you will likely remain chilly for the length of the flight, since the air by the door is colder, presumably because the door has inner mechanical workings instead of insulation.

RELATED: The 10 Best Coach Class Airlines in the World

Fly enough and you'll eventually end up in a broken seat. Maybe the seat leans at a weird angle. Or it jiggles loosely in its bolts. Perhaps the recline mechanism is jammed. Or, as seems to happen far more often than it should, the headphone jack or the seatback screen is on the fritz. Of all the bad seats to get, this one might be the true worst because it's the one you can't plan for. In the best-case scenario, you can draw attention to it and be reseated, but it's our experience that broken seats and full flights go hand in hand.

The Seat Near the Bathroom

Questionable aromas aside, the seats closest to the lavatories are still among the worst in the cabin. That's because there's nearly always a line for the bathroom, and there's something about being in line for the bathroom that seems to make airplane passengers take leave of their basic manners. Expect to be treated to a constant stream of passengers steadying themselves on your seatback, jiggling it back and forth—because of turbulence or simply because they're in the middle of some complicated hamstring stretch. Prepare for getting various body parts smooshed into your shoulder as people try to accommodate two-way traffic in the aisle. And let's not forget all the projecting-over-the-engine-noise conversations you'll be treated to while trying to sleep.

RELATED: The Germiest Places in the Airport and on Your Flight

At the back of some planes there are a few rows of two. This might seem like a dream—more space, no middle seat. But … there are issues. There's a gap between the seat and the wall of the plane, so you won't be able to lean to sleep. If you like the feeling of a little room, it can be nice (and it's a perk to be able to stash your stuff alongside you rather than under the seat in front). But beware: The person in the seat behind you may claim this space as their extra legroom, which could mean enduring malodourous feet wiggling in your peripheral vision for the length of your flight. And believe us when we say this can make any flight smell twice as long.

The implied promise of the term "window seat" is of course that there's a window you can actually see through. But many planes have configurations that place some seats between windows. Not only is this disappointing for anyone who likes to look out the window, it can also create complicated lighting issues, as the window in front of and behind you may peek into your row but you won't be able to control them. So if you want a dim cabin but the person behind you prefers light, you're either going to have to negotiate (we suggest bribing with chocolate) or invest in a good eye mask.

Sit in the last row of a plane and you'll likely be treated to a custom blend of lavatory aromas, seats that don't recline, and a constant crowd of impatient bathroom aspirants waiting their turns. And when it's time to disembark, here's a tip: Don't bother getting up for at least 10 minutes after the seatbelt sign dings off. By the time the aisle is clear for you to go, it will just be you and the cleaning crew.

You should be wary of being in that first row when a plane goes from four to three seats per row, or three to two. When a configuration switches to adapt to the tapering of the plane, legroom gets complicated since the optimal leg-stretch zone will be occupied by the seat anchors. Not only does it mean you may encroach on your neighbor's space to stow and retrieve items placed under the seat, but it can lead to some pretty significant body aches if you're twisting to reach your allotted leg room.

RELATED: Just How Uncomfortable Can Air Travel Get?

The Rows in Front of Exit Rows

You know all that legroom that the people have in the exit row behind you? Know that it's partially at the expense of the row ahead. To ensure that exit rows remain clear for emergencies, the row in front of the exit row is lined with seats that don't recline (or recline only very slightly). For safety, it makes perfect sense. What makes even more sense, though, is to try to avoid these seats when you're choosing yours.

The DMS, or Dreaded Middle Seat, is the true mush-pot in the seat assignment game of duck-duck-goose. On non-assignment airlines like Southwest, you can see the panic in the eyes of people in later boarding groups as they search for a seat—any seat—that's not sandwiched between two people. On airlines with seat assignments, dreaded middle seats are always the last to be claimed, meaning the later you book, the more likely you are to have to resign yourself to battling your window and aisle seatmates for the extra few centimeters that armrest domination secures.

For some people, bulkhead is basically the first class of economy. But many people don't realize its drawbacks until they've shelled out extra money for these coveted-but-flawed seats. As with seats by the main exit, bulkhead seats lack under-seat storage, meaning you'll be stowing all your gear during the long stretches of time around takeoff and landing. There's also the slightly reduced width of the seat (due to the tray-table-in-armrest configuration) to account for, and the simple fact that some find staring at a wall unpleasant. Finally, unless you've secured that extra space by filling it with an airline-supplied baby basinet or a bunch of your own junk, you may find that other passengers try to use it as a cut-through to get to the opposite aisle.

So how do you avoid these worst airplane seats? Before selecting a seat, we always head to SeatGuru and look up the airline and plane to figure out which seats to avoid. (SeatGuru is part of the TripAdvisor Media Group, which also owns SmarterTravel.)

Read the original story: How to Avoid the Worst Seat on the Plane by Christine Sarkis, who is a regular contributor to SmarterTravel.