There's a 19 percent solution to our debt and deficit problems.

Rep. Paul Ryan (R-WI) put forth a budget plan with $32 billion in spending cuts for fiscal 2011 last week, but even that plan let security spending grow. The Washington Post reports, "Under the GOP plan, agencies related to national security - including the Pentagon and the departments of Homeland Security and Veterans Affairs - would get a slight bump in funding, receiving an extra $8 billion compared with current levels."

And other Republicans are even less interested in cutting defense spending.

Rep. Vicky Hartzler (R-MO) recently told the New York Times that "now is not the time to talk about defense cuts."

"I will not support any measures that stress our forces and jeopardize the lives of our men and women in uniform," said Rep. Buck McKeon (R-CA), the new chairman of the Armed Services Committee. "I will also oppose any plans that have the potential to damage or jeopardize our national security."

Congressional Republicans say they'll get around to holding a vote for the 2011 budget (the fiscal year started Oct. 1, 2010) during the week of Feb. 14. But as President Barack Obama and Congress start wrangling over raising the debt ceiling and hashing out budgets for 2011 and 2012, there's really only one figure you need to keep in mind if you care about restoring the federal balance sheet to some semblance of sanity.

That figure is 19, which is the percentage of total economic activity or Gross Domestic Product (GDP) that the federal government can realistically plan on in terms of revenue.

Any budget plan that is predicated on the government raising more than 19 percent of GDP will only guarantee continuing annual deficits and out-of-control debt levels.

Federal debt held by the public, the amount the government owes to foreign and domestic creditors, has surged to $9 trillion, or roughly $29,000 per person. That amount doesn't include the money the federal government has borrowed from other government accounts like Social Security or Medicare (that's another $5 trillion). The speed of the debt increase is as dazzling as it is the product of bipartisanship. As George W. Bush took office, gross debt was $5.9 trillion and by the end of 2008, it was $10.6 trillion.

The mounting debt stems from massive spending increases and minimal tax receipts. In fiscal year 2010, which ended last September, the government spent $3.6 trillion while collecting $2.1 trillion, resulting in a $1.5 trillion deficit. As a percentage of the overall economy, spending equaled 25 percent of gross domestic product (GDP) and the deficit came to 10 percent of GDP, figures not seen since World War II.

These trends are unsustainable and threaten to destroy not only any sort of near-term recovery but the long-term economic growth that increases standards of living.

Any plan to bring fiscal sanity to Washington must be based on realistic projections of revenue and a bipartisan consensus on what cuts should be made. A successful plan can't deliver a death blow to a nascent economic recovery by jacking up taxes and it shouldn't immediately slash spending that many have come to rely on, especially in tough times.

What's needed is a multi-year framework that will allow the government, taxpayers, and creditors alike to feel confident that change is both possible and deliverable.

As a first step, the president and Congress should consider a 10-year plan that will balance the budget in 2020 without raising taxes from their current rates, give representatives and taxpayers a say in what outlays should be cut, and still keep government outlays slightly higher as a percentage of GDP than they were in Bill Clinton's last year in office.

The CBO projects that, if the current Bush tax rates, fixes for the alternative minimum tax, and other measures are kept in place, federal revenues will reach about 19 percent of GDP in a few years and then remain at that level. While that figure is a bit higher than the historical average, it is well within the bounds of reasonable expectations.

The CBO estimates that if spending isn't cut, the federal budget will grow from $3.7 trillion this year to over $5 trillion in 2020 (all numbers are adjusted for inflation). However, the CBO says that total GDP in 2020 will be $19.5 trillion. That means that if the government wants to spend 19 percent of GDP, it should only spend about $3.8 trillion. So if we want to balance the budget in 2020, we need to cut about $1.3 trillion in projected spending (due to rounding, some of the figures don't add up perfectly). If you spread that amount over 10 budgets, it comes to trims of $130 billion in each year of the next decade from projected spending increases (not from current spending levels).

For illustrative purposes, the following table spreads those cuts equally on a percentage basis over the six largest categories of federal spending. However, the cuts do not have to be spread across the board. Some categories could increase, while others are subjected to larger cuts. The table also shows what the total projected federal budgets would look if spending restraints are enacted. 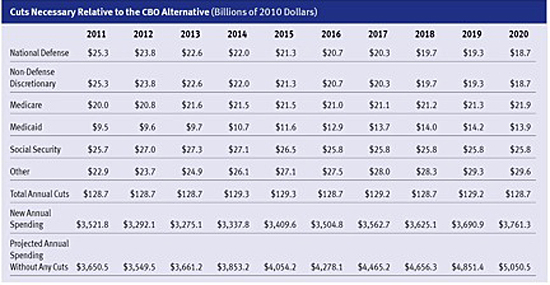 Another appealing aspect of this plan -- apart from its simplicity -- is that it makes it very easy to design budget rules around it. The road is clear and Congress can adopt strict and credible budget caps for the next ten years that can't be overridden without serious consequences.

David Osborne, the former head of Vice President Al Gore's "Reinventing Government" task force, is a believer in what he calls "budgeting for outcomes." As an advisor to various cash-strapped state and local governments, Osborne pursues a two-step strategy to fixing out-of-whack budgets. First, and most importantly, you set "the price of government." That is, you figure out how much money you can spend in a given year. When it comes to the federal government, we have a strong sense of how much revenue will be available based on the past 60 years of experience and the CBO's projection: It will be around 19 percent of GDP.

The next step is to clearly establish the top priorities of the government. In rank order, what are the most important things that the federal government needs to be doing and what are the things it can pull back from? For example, Sen. Rand Paul's plan cuts federal education spending by 83 percent while cutting defense 6.5 percent. Do taxpayers share those priorities? The strength of Osborne's approach is that it builds consensus even as it makes government decision-making more transparent.

Once the cost of government and its rank-ordered priorities are established, spending decisions become much easier both to make and to defend before a voting public. And the public isn't shrinking from the conversation. Indeed, a January poll from CBS News found that 77 percent of Americans favor balancing the budget by cutting spending, compared to 9 percent who wanted to raise taxes. Majorities say they in favor of means-testing Social Security, reducing farm subsidies, and cutting defense spending. It's time to those sentiments to the test. If we don't, we'll be facing higher taxes, higher spending, higher debt, and almost certainly higher interest rates and dollars that are worth less and less.

It's well past time that the same elected officials who got us into the budget mess not only join but lead the conversation on restraining spending. As they pursue a 19 percent solution to the nation's budget problems, they can always point out that in 2000, a year most Americans remember fondly, the federal government was spending just 18 percent of GDP.

Nick Gillespie is editor in chief of Reason.tv and Reason.com. Veronique de Rugy is an economist at The Mercatus Center at George Mason University. A version of this article will appear in the upcoming March issue of Reason magazine.