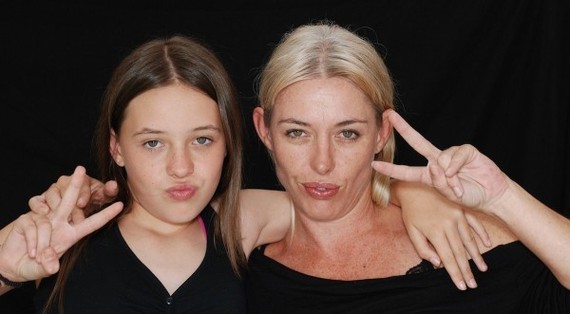 A recent article in the New York Times discussed the trend of so-called "cool moms" joining in their daughters' debauched bachelorette parties -- drunken trips to male strip clubs in Vegas included. According to the Times:

Mothers like Ms. Rosenberg and Ms. Maffucci said they wanted to be included because they have completely different relationships with their daughters than their mothers had with them.

Ms. Rosenberg is a baby boomer, one of the 75.8 million Americans born during the post-World War II population surge. Boomers, especially mothers, have much closer relationships with their children than the generation prior. "We are well traveled, we read the same books, see the same movies, we take exercise classes," Ms. Rosenberg said. "For many of us, we feel like an older sister."

Thanks to social media, it's easier than ever for women like this to be enmeshed in their daughters' lives.  "My mother and I follow each other on Facebook and Instagram," one bride-to-be told the Times . "She knows my friends and follows them, and they follow her. I'm lucky. I have a cool mom who doesn't hover but who I can talk to about anything." Another bride-to-be noted: "Our grandparents looked and acted so much older. It's not a midlife crisis, but they want to prove they are not as old as their parents were at this age. And the truth is, they aren't. My mother is very hip, she follows the same trends I do."

If all this makes you want to yell "EWWW, stop being so weird," then you're not alone. As Jessica Coen writes in Jezebel:

These women have something to prove; they're fueled by their self-insistence of their own eternal youthfulness. This desire to tag along on a raunchy night with one's own child, to experience her life just as she does, is exactly what happens when a woman internalizes society's message that she is only worth a damn if she's young and dewy and carefree, things that we all supposedly cease to be the minute we spit out offspring or, worse, show signs of aging.

No matter what you believe about the role of mothers in their adult daughters' lives, a mom's conscious decision to "live vicariously through them" (and for hours I have been unable to shake the fact that Rosenberg said those words aloud, willingly and perfectly articulating children's worst suspicions about over-involved parents) is the exact point at which a mom goes all Single White Female on her own child. It propels the parent-child relationship down a confusing, twisty rabbit hole--the same rabbit hole where, coincidentally, Dina Lohan, Kris Jenner, and the Real Housewives live. And as soon as there's enough Tito's to flood the hole, everyone drowns.

So how can you be a cool mom to an adult (or near-adult) daughter without turning into one of those self-loathing "cool moms"? Here are our top 10 tips:

1) You can be Facebook friends if she requests it, but limit your interactions to the occasional "like" and the rare comment. If you have a comment about every single one of her posts and pics, then call her up or send a text -- do not post them publicly.

2) Ditto for any of her friends -- you can accept their friendship requests, but if you see something on their profile that you probably shouldn't have, it means they forgot they're your friend (or, rather, "friend") and you should just graciously "hide" them.

4) You're not her big sister, and you're not her best friend. Other people will fill these roles for her. You're her mom, you're her only mom, so stop trying to act like this is some "uncool" burden. It's a privilege to be a mom. And it's a privilege to be able to say dorky mom stuff, too, like, "When I was your age..." and, "Because I said so," and, "T.M.I.," and, "Have fun at the strip club!" Of course, if she invites you to the strip club without any coercion from you, then you are well within your rights to accept said invitation -- just don't judge your daughter and what she does with her dollar bills that night!

5) Go ahead and type LOL when you text your daughter. Do it a lot. This will remind her that you are old(er) and dorky(er). Because while women brag about having cool moms, they also secretly want their mothers to be big fat dorks, sometimes, too. It's comforting, like a cozy worn sweater, or that tattered Wham!/*NSYNC/Fall Out Boy/One Direction poster your mom never removed from your childhood bedroom. After all, with age, comes wisdom (and maybe mom jeans...maybe not).

6) Tell your daughter that she can tell you everything, but don't expect her to tell you everything. Make sure she realizes that there are some things you don't need to know (and that you won't be hurt when you realize she hasn't shared them), so long as she is being safe and kind and respectful of herself and others. Similarly, keep your own secrets.

8) Don't ever ask to borrow your daughter's clothes. Except maybe a pashmina or a necklace or a hat you need for a wedding. If she offers up an item on loan, be grateful and thankful, but still consider a polite "no thanks," even if you know you could rock the shit out of it.

9) Don't tell her about your sex life unless she asks.

10) Don't complain to her about your weight, or your wrinkles, or your neck. No matter how old your daughter gets, it's still your job to show her how to age gracefully, how to love your own  body, how to be comfortable in your own skin. Bitch to your own friends about how much you hate your bulging waistline or drooping boobs. As far as your daughter is concerned, you're happy just the way you are.

Want more parenting tips?
Top 10 Things We Will Tell Our Daughters About Sex