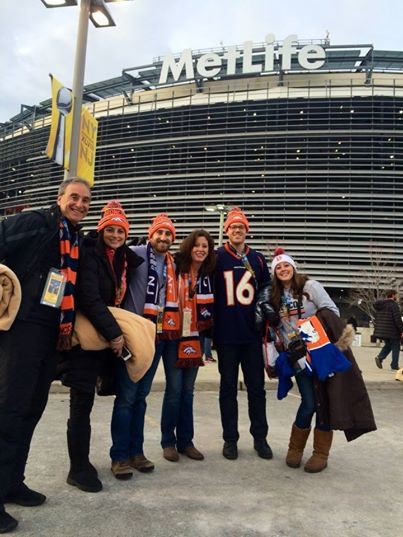 I don't know if you heard, but the Denver Broncos lost the Super Bowl. I know, I know, I was shocked too; but at least I got to be shocked in person, because I was actually at the Super Bowl this year. You know that famous painting by Edvard Munch titled, appropriately, The Scream? Now you've got the visual of Debra Fine at the game, except I have way more hair and I was wearing way more orange.

I would like to say I handled the loss with grace and aplomb, but I was -- you know -- disappointed. All Broncos fans were disappointed. We (and, yes, I speak for every single Broncos fan here) never even considered a loss. No one told us. I considered blaming the loss on Joe Namath's coat, but that seems immature. What did that coat ever do to me?

I was with my husband and our children and, as usual, I was, impressed with the good sportsman like conduct we all managed to embody during what some (some = me) have called a bloodbath. You already know my view on booing; but let's face it -- losing is just not as much fun as winning.

So here I am, licking my wounds from the Super Bowl loss while already engrossed in the Olympic games and I am asking myself what, exactly, makes a good loser?

And no matter who you are and what you say, we have all been on the losing side of life. Perhaps you were not given a deserved promotion, asked to the prom by the one guy you actually wanted to go with instead of that Mr. Creepers from chem who asked you two years in a row, chosen for the schoolyard kickball team or voted as America's Next Top Model (I can't answer to the last one, but the others, well, let's just say I get it and leave it at that). How do you overcome the sting of losing? The bigger question -- how do you overcome the loss and become a gracious loser?

Earlier this week I watched the women snowboarders battle it out on the slopes of Sochi and my heart swelled with the obvious rapport between the competitors. Not only were they all engaged in each other's attempts, they were hugging and high-fiving at the beginning and the end of each run. Even while standing at the bottom of the hill, realizing that the gold had just gone to American Jamie Anderson, Enni Rukajani of Finland and Jenny Jones of Great Britain, now taking home the silver and the bronze respectively, were congratulating Anderson -- in a big way. Hugs, smiles, kisses and words of praise. When Sarka Pancochova managed to make her way down the mountain unattended after a major spill that resulted in a cracked helmet and what I can only assume what will be a screaming headache (and hopefully not more), the spectators and competitors alike were rooting her on. Everything was how it should be -- kind, gracious and authentic.

It's hard to know what to say and how to say it when you are in the tornado that comes with loss. Emotions are whirling, reality is setting in and your mind, body and soul are trying to comprehend what just happened.

I've had several people approach me over the years about this topic. And, like most parents, I've had to patch up the broken spirits of my children when things didn't turn out the way they had hoped. So we all have experience in losing; but some of us need practice on how to handle it.

Here's the good news: you are allowed to be totally and utterly disappointed at a loss. That's normal. If you didn't feel the pangs that come with defeat, you would not be human which would make you a robot or -- worse -- dead. So accept the fact that every single person has experienced loss and every single person, except maybe Ghandi, felt upset by that loss. You are free to go home and eat half a sheet cake, or rip out that ugly fireplace or make fun of Joe Namath's coat, but in the meantime, you get to take this opportunity to congratulate someone else for his or her good fortune. Rule number one when it comes to being a good loser is to keep all negative comments out of the mix and be the first one to approach the winner. Do not hide out in the corner (eating sheet cake or mocking Joe Namath!), square your shoulders, take a breath and walk up to the winner with purpose and pride.

Sound impossible? It's not. And like someone somewhere said sometime, you can do anything for a minute. Here's how:

You and a colleague were up for the same promotion and it was just announced that your colleague was awarded the job:

What to say: "Pete! Wow! Congratulations on the promotion."

What to do: Smile, shake Pete's hand and excuse yourself. You don't need to be a hero and soak in Pete's success; you just need to be gracious and polite. You can go now. Go on. Go get that sheet cake. Skedaddle.

You are sitting at a very expensive fundraising dinner because you are a finalist in a philanthropic award pool; and your name is not called:

What to say: "Beth -- congratulations on the win. Your efforts this year have been amazing and it was an honor to be nominated along with you."

You are sitting with a bunch of other parents at the Homecoming game when they announce the queen and instead of your daughter, it is that spray-tanned obnoxious cheerleader who, by the way, had lice in the fourth grade.

What to say: "Congratulations, Ann. Jessica must be thrilled."

What to do: Go find your daughter, hug her, tell her that high school is almost over, and remind her that she never had lice.

Your son does not make the baseball team:

What to say: "I'm sorry, buddy. How are you feeling? I'm proud of you for going out for the team and trying your best."

What to do: Hug him, tell him that grade school is almost over and soon he'll be in high school where the homecoming queen won't give him the time of day and then have a job with the possibility of a promotion and then he will do a lot for the community and will be up for a non-profit award that he won't get and this loss will just be one of many!! Ok -- delete everything after "hug him." Add in a Dairy Queen run. Call it a day.

In 99 percent of losing scenarios, this recipe stays the same: Be first on the scene, offer a quick but sincere congratulations along with a handshake or hug when appropriate, and move on. To lose is inevitable, but to be a good loser is achievable. So go out there and be the best good loser you can be -- gold medal or not -- you'll be happy you did.