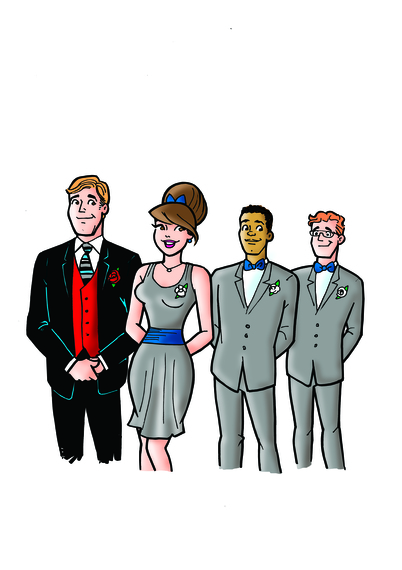 Ignore the title. There is no right way to be a groomsgal! Now that marriage equality is official we can all expand how we think about gender, love, friendship, and weddings. Groomsgals symbolize all of that.

What is a groomsgal? A female member of a grooms' party. She might be a groom's closest friend, sibling, or cousin. She might be lesbian, straight, or transgender and she may not even use the pronoun "she." Just as I've written about bridesmen, groomsgals represent wedding party equality and gender evolution in general.

Unfortunately, like a bridesman, a groomsgal could also be the bridal party member who faces the most scrutiny and blame from guests who are afraid of change.

The following tips may help groomsgals to make the most out of their transformative opportunity and to maintain centeredness and poise in the face of possible adversity at the same time.

1) Give the parties a shower

Groomsgals, due to the novelty of your role, you can effectively persuade both spouses-to-be to make their showers and bachelor(ette) events Jack-and-Jill (coed)--or even Jill-Jack-Giant-and-the-Three-Little-Pigs (no holds barred). Convince them to include anyone with whom they'd like to celebrate and get support. There is no good reason to restrict such celebrations based on gender and actually to do so might hurt the feelings of a sister, cousin, or best friend.

You don't want to look like you accidentally wandered to the wrong side of the aisle, so no need to dress like the other girls. That being said, groomsgals, especially if you're groom is straight, be "one-of-the-guys." By all means look and feel good in your dress, separates, or suit, but you're a team member, not the mascot, lead-singer, Snow White, or Marilyn Monroe...

[Cue Image of groomsgal in flirty white dress, with fan blowing from below, Marilyn-style, with groomsmen behind her, agape, in dull-grey suits. While bride looks on, annoyed...]

You're one of Ocean's Eleven, not Julia Roberts.

[Cue Image of Grooms party (including groomsgal, a little to one side/not dead center) standing in a row, all in similar posh suits, and sunglasses--uniform, Ocean's Eleven-style.]

You're also a catalyst for change, so go ahead and convince the bride(s) and/or groom(s) to forego separate parties and to instead to have one big, gender neutral Wedding Ensemble.

[Cue Image of Wedding Ensemble: some gals, some guys, sporting a variety of colors, fabrics, pants, dresses, capes?, loin cloths?, etc., but looking like a team].

Whom and what this day is about is certainly not up for debate, buuut..... as part of an ensemble you'll be more distracting by trying to be invisible than if you make purposeful choices.

This of course goes for the entire entourage, but it is particularly crucial for you since you've been cast very much against-type in the eyes of your audience. Unless one of your brother-men or sister-maids is sporting a Girl With The Dragon Tattoo updo, you'll be the most likely to pull unwanted focus from your leading man and his spouse-to-be without even trying. So, you'll have to think like a professional actor and map out your intentions throughout the course of the ceremony.

Now, you may be uncomfortable with the idea of " making choices" for fear of eliciting the question, "Who's that gal?" (Or more directly, "Who's that indulgent, attention-seeking, wedding-crashing, photobomber?") But again, the guests may think this of you no matter what you do; we often accuse people who simply appear to deviate from the norm of "making" us uncomfortable. I promise that you will exacerbate any discomfort (including your own), if you simply smile tautly and pretend to blend-in (you won't), hoping the guests' confusion and curiosity will somehow evaporate (it won't).

Rather than allowing yourself to be the doubtful outlier on the altar, you can alter the narrative so as to present yourself more accurately as one of the groom's proud inliers. This means working with the groom ahead of time to stage the ceremony in such a way that your palpable presence clearly belongs, allowing you to move seamlessly through all of the steps. Together, the two of you must make choices that will invite your guests to have an open mind, maybe even to laugh, but certainly to acknowledge your role and to say "Yes." when they see you.

Clear up the waiting-at-the-altar situation: It's all about presence and poise. If he wants to wait at the altar like a traditional groom, try to convince him to process like his spouse-to-be, alongside his primary caretakers. But if he insists on waiting center stage, with his buddies at his side, consider how comfortable it will be for you to stand stiffly, with your hands crossed in front of your crotch. If that works for you, great. Not so much? Offer a creative alternative, perhaps show everyone how to stand poised and relaxed, with arms at their sides. A few yoga classes might help you practice breathing while standing still, in a way that is present (without scene-stealing), relaxed (without slouching), and poised (without looking like a gymnast); and you can share these tips with the guys.

Processional: Rehearse your aisle-walk. Getting from the atrium to the altar with a smile isn't exactly an Olympic, triple axel twirl, but with all of the incredulous eyes in your path, you could easily bumble in the line of fire if unprepared. To avoid this, pick a focal point at the rehearsal, pretend it's your favorite pet, and then practice slowly walking toward it. By showtime, even if the wedding is set in an MMA cage match, you'll glide down the marital runway with the graceful coolness of Angelina Jolie.

Think a happy thought: Be armed with a very specific thought or image that will light up your eyes during the ceremony. Remember, the eye of the crowd will gravitate to you when it's not on the groom(s) or bride, and like a film actor in a close-up, every thought, feeling, and expression that registers on your face will be read. You'll effectively refocus the crowd's wandering eye back to the main event, by directing your gentle gaze at the nuptialers, conveying a heart-felt mirth that seems to swell from the inside out. If the chemistry of the leading lovers isn't contagious enough to activate your smeyes, try thinking of a something reliably funny that you share with the groom, so that the desired expression naturally forms on your face.

[Cue Image of groomsgal standing next to the 'men, with a mirthful expression. Bubble above her head with groom and groomsgal impersonating Donald Trump, laughing.]

Recessional: Why not mix up the whole gender binary visual by having all groomspeople link arms with their counterparts as you exit, on equal terms.

Like an actor on the big stage, you've set all your marks in advance. Now just radiate happiness for your dear friend.

*This post first appeared on Mark O'Connell LCSW's Psychology Today column, Quite Queerly, and has been adapted from his book Modern Brides & Modern Grooms.