Somehow, you turn 25 and you're a virgin. You live on your own, buy groceries most of the time, do your laundry (at your parents' house, but still) and floss when you manage to remember. You have three jobs and enough friends to defend against loneliness. A few of your girlfriends know you've never so much as fooled around with anyone. One of them tells you it's cute. A couple of the others think you should try online dating. You think maybe they have a point, because you haven't had a date since high school.

The two you did have -- one was freshman homecoming and the other junior prom -- were with guy friends, one of which ended up with the two of you listening to Disney songs in his car instead of going into the gym with your friends. When your girlfriends ask you where you were and you say "In his truck," they all giggle and think it's going somewhere it's not.

You go to college and grow your hair long, because maybe the short hair you've always had is the problem. You still play sports, though, the way you always have. This is how you make friends, what makes you feel strong. Rowing makes you happy. While you're at Saturday morning practices, you listen to your teammates talk about their Friday night and this guy they met. They wore a dress. You wish you could feel right wearing a dress. You wonder if rowing is making your wide shoulders even wider. Your mom thinks so. She says you shouldn't lift weights. You try not to hate the girls in dresses with the narrow shoulders and the phone full of texts from a boy they met last Friday.

By the time you reached 6th grade, you'd had three "boyfriends." Between 8th grade and now, you've had zero. Your grandmother is worried you're going to die alone. Your mom worries you're a lesbian until the third time you tell her you're not. Sometimes you wonder if she still wonders. People talk about you being gay and when it gets around to you, a part of you wishes you were. Maybe it would be easier. But you're not. When you learn how to get yourself off, all you can think about is the boy you like. He never texts you. You've been taught not to chase, so you don't text him either.

Just before the end of your freshman year of college, your cousin's roommate tries to kiss you when you're both drunk. He has a girlfriend and you, having been cheated on by your first boyfriend (can you call an 8th grade boy a boyfriend, and can you call it cheating when all he did was kiss and share a blanket?), have made it a rule never to be that girl. Anyway, he's a creep.

Sometimes late at night, you think you maybe should have let him.

You graduate with a good GPA, move home, and cut your hair short again. Your crushes have long half-lives, and while you wait for them to fade you watch movies and try to talk yourself into, then out of, doing something that could be either deal-sealingly romantic or get you a restraining order. You know it'll be different from the movies when it happens, but aren't sure how other than that he will not be Ryan Gosling and that the camera will not cut away from the after-awkwardness. You mostly settle for safe fantasies with only yourself in bed. You think, probably too much, about having sex with this guy you like. You wonder if he or anyone imagines or has ever imagined having sex with you.

You get a kick out of listening to other people talk about sex. Everything about it. You laugh at their jokes. Most of the time you know what they mean, and sometimes you think you might, and once in awhile you have no idea.

The night you turn 24, one of the guys you "dated" in grade school pushes you up against the pop machine behind a bar and kisses you hard. You feel nothing, and will let him down easy the next day. He talks about his ex a lot until he says, with you braced up against the neon red of the Coke machine, that he would have married you, had you two stayed together, had he not moved away in 5th grade. He thinks he still could marry you one day. While he talks, you're thinking about how you're going to let him down and wondering if your other ex was right to call you a prude. You don't tell your grandma about turning down this pre-proposal of marriage.

A middle-aged man kisses you after a house party and tries to get you to come back inside. You feel a lot. But tonight is the first night you've met him, and you get the feeling, after watching him chase your best friend all night, that you're his second choice at best. You let him down easy and ride your bike home and think maybe you should have gone inside with him anyway.

On your 25th birthday, you hang out with another guy, a friend you'd assumed was gay. This guy doesn't push you up against a pop machine. He buys you a drink, and you talk about musicals and irony and he drives you home at the end of the night. You keep running into each other. He sends you grammatically correct texts. He kisses you one night after a party. You feel a lot. He says he's lost the ability to fall in love. You wonder if this will be his excuse if he ever breaks your heart. You try not to fall head over heels for him, but you do anyway.

You haven't told this guy you like that you like him, or that you've never so much as fooled around with anyone. Because what will he think of you? Will he think something is maybe wrong with you?

Some nights you go home alone after seeing this guy and you wonder if something is maybe wrong with you. Your friends wonder if there's something wrong with him. You try not to worry about it. You find a way, more than one way, to make it awkward enough with this guy that things sort of fade. He breaks your heart anyway. Or maybe you broke it yourself.

And maybe it matters that you still want to go to bed with this guy, this guy who's different and kind and smart and funny and can't fall in love. Maybe it matters that you want it more than you want McDonald's when you're hung over, more than you want a lot of things. And maybe that will be enough, and maybe it won't. Or maybe you should call up the guy who trapped you against the Coke machine.

You go to bed. You think of sleeping with someone. Not having sex with this someone, but just sleeping next to him. You try to imagine what it would feel like to have had sex with someone enough times that you can go to bed with him without Going to Bed with Him. You try to sleep. You wonder how much a queen-sized bed costs, and if you'll ever need to know. 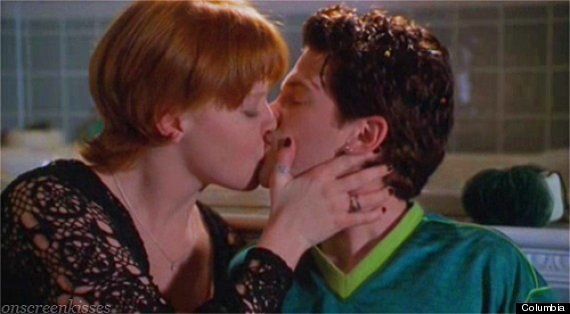 1 / 12
"Can't Hardly Wait"
The best way to convince someone to have sex with you is to get locked in a bathroom with them.