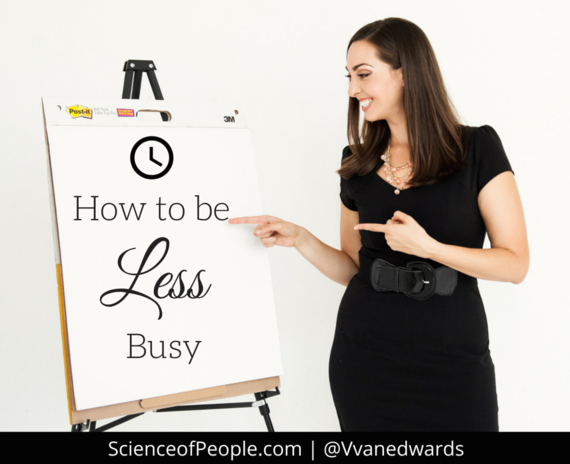 I met a friend for coffee, and she asked, "How's it going?"

She started to laugh and said to me, "When was the last time you weren't busy?"

Whoa, this question rocked me to my core.

Second thought: I can't even remember the last time I wasn't busy.

Third thought: Something has got to change because

Busy is the new normal. We default to busy.

... and that is no way to live. This interaction led me to choose "Essentialism: The Disciplined Pursuit of Less" by Greg McKeown for April Book Club. (Part of my New Year's Resolution was to read 12 books in 2015 as a part of Science of People book club. Read with us!)

If you are in a perpetual state of busy, you have got to change.

If you don't prioritize your life, someone else will.

I highly encourage you to read Essentialism, but if you are just too busy (hint, hint) here are my favorite tips below:

1. The Mindset of an Essentialist

Essentialism is a mindset, it is a way of life and it is a new way to be. Here is an elegant breakdown of a non-essentialist and an essentialist.

Before diving into the principles, think about why you are here. McKeown shares the story of an Australian nurse named Bronnie Ware who cared for people at the end of their lives and recorded the regrets most often discussed by patients. She eloquently states that most people express this regret at the end of their life:

"I wish I'd had the courage to live a life true to myself, not the life others expected of me."

Challenge: Write down the five things you want to achieve by the end of your life.

One of the most powerful pieces of science McKeown shared in the book was on something called learned helplessness. Martin Seligman and Steve Maier did an experiment with German shepherd dogs.

Seligman and Maier divided the dogs into three groups. Dogs in the first group were placed in a harness and administered an electric shock but were also given a lever they could press to make the shock stop. The dogs in the second group were placed in an identical harness and given the same lever and the same shock with one catch. The lever didn't work, rendering the dogs powerless to do anything about the electric shock. The third group of dogs were simply placed in the harness and not given any shocks. Afterwards each dog was placed in a large box with a divider across the center. One side of the box produced an electric shock while the other did not. Then something interesting happened. The dogs that either had been able to stop the shock or had not been shocked at all in the earlier part of the experiment quickly learned to step over the divider to the side without shocks. The dogs that had been powerless in the last part of the experiment did not step over the divider. These dogs didn't adapt or adjust. They did nothing to try to avoid getting shocked. Why? They didn't know they had any choice other than to take the shocks-they had learned helplessness.

If you had to summarize Essentialism, it can be done in this headline:

No more yes. It's either HELL YEAH! or No

I call this the Hell Yeah Principle. It is incredibly difficult to implement, but it is a profound guiding principle and worth every ounce of effort. Why? It means living with extreme purpose and gusto. No more maybe, no more meh, no more half-assed tries. You either do it and love it, or don't do it at all. Can you live by the Hell Yeah Filter?

Challenge: Write, "It's either HELL YEAH! or No" on a Post-it note next to your computer. When responding to emails, taking calls and making your to-do lists, run everything through the Hell Yeah filter on this note. Don't do anything that doesn't pass.

My favorite thing to do at the Science of People is to take big concepts and to break them down into practical tasks. If you want to be less busy, here are the 3 things you should do right now based on the Essentialist philosophy:

Mark your calendar to do this on the first day of every month.