Among the existential crises that plague me on sleepless nights: Why did my hilarious photo of a pig-roast-cum-dance-party get only nine "likes" on Instagram, when my airplane portrait got 40? And, crucially, will I ever learn how to be popular?

In what feels like an increasingly common scenario these days, it appears my best shot at being liked requires taking orders from an algorithm. According to new research based on machine learning software, if we want our photos to be popular, we'd better show skin, guns and/or teacups.

Aditya Khosla, a graduate student in computer science at the Massachusetts Institute of Technology, has devised a formula that sheds light on how the contents of a photograph may predict its popularity online. In a research paper published this month, Khosla and his co-authors explain how they analyzed 2.3 million Flickr photos to see which got the most views, then looked for correlations between the color, composition and subject of an image and that picture's likelihood of languishing in a state of online obscurity.

"Some people have 10 friends, some have a thousand. Despite all these differences, it's interesting to see that the content [of the image] itself can be used to predict how popular an image is going to be," said Khosla.

Of the 1,000 objects identified in the photos, the researchers found that "brassieres," "revolvers," "miniskirts," "maillots" (a one-piece woman's bathing suit), "bikinis" and "cups" have a "strong positive impact" on a photo's popularity. (Our demitasse fascination could potentially be an error resulting from the software's image recognition capabilities, but given that the finding held consistent for so many images, Khosla doubts it's a fluke. Rather, it seems the researchers unwittingly surfaced our subconscious attraction to pottery.)

While underwear and dinnerware get people clicking, other objects -- including spatulas, plungers, laptops, golf carts and space heaters -- tend to kill interest in an image, the researchers found. Giant pandas, cheetahs, llamas, basketballs, ladybugs and plows all produce a slight bump in viewers' attention.

When photographing your masterpiece, the researchers also suggest staying away from greenish and blue-gray hues, as these "outdoorsy" colors "tend to be less popular," said Khosla. Instead, the algorithm recommends a palette of bright, Mastisse-ish shades, including aqua, bright red, navy and chartreuse. 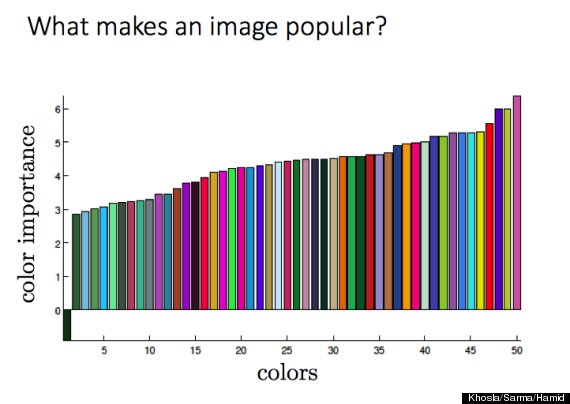 "The longer bar means that the color leads to more popularity," explains Khosla.

And lastly, opt for human figures, or at the very least a well defined focal point.

"We can see that semantically meaningful objects such as people tend to contribute positively to the popularity of an image," the researchers wrote in their report. "Further we note that open scenes with little activity tend to be unpopular (with many exceptions of course)."

Naturally, social cues, such as the number of online followers a person has, can also affect the popularity of an image. But it's probably easier to tweak our photos to engineer their success than it is to actually make ourselves more likable. Khosla, who has developed a program that alters headshots to make people's faces more memorable, speculates that his new findings could help create software that would let users edit their photos to make them more appealing. "Can photographers be aided with suggestions on how to modify their pictures for broad appeal vs artistic appeal?" the researchers ask in their report. "This could be an interesting research direction as well as a promising product."

An Instagram photo of a teacup -- in the pink shade Khosla's algorithm recommends, no less.

In the meantime, Khosla and his co-authors have launched an online tool that lets photographers test the odds that their image will be popular. Scores can be as low as 0.8 or as high as around seven, and a score of, say, four indicates that a photographer can expect roughly 16 (or two-to-the-fourth-power) views per day on that image. Since the rating isn't exact, Khosla advises people to look at the relative scores of several images before they choose which one to post.

In some initial tests, I found the software's tastes matched up nicely with the whims of my friends on Instagram. Khosla's algorithm gave my pork portrait a big thumbs down.